Frank Turek
|
Posted: Oct 29, 2016 12:01 AM
Share   Tweet
The opinions expressed by columnists are their own and do not necessarily represent the views of Townhall.com. 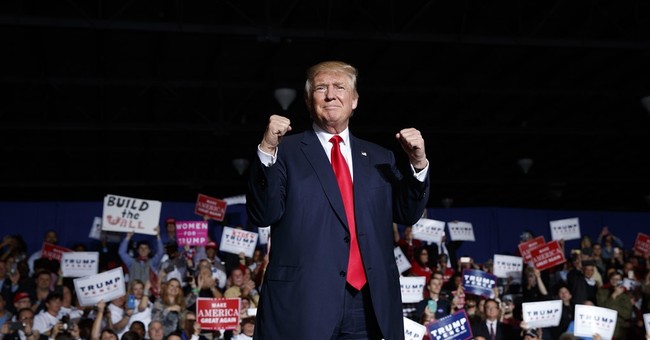 There’s a new bumper sticker that says, “I already hate our next president!”

Indeed, many folks can’t see enough good reasons to vote for either Trump or Clinton. While I don’t endorse candidates (because people then think you agree with everything the person says or does), I do endorse the ideas and policies that certain candidates advocate.  With that in mind, there are actually several good reasons—maybe even thousands—to vote for or against one of them.

When you vote for President, you are literally voting for thousands of people that come along with the top of the ticket and the party platform that they will implement.  This year the party platforms are virtually opposites of one another and will take this country in radically different directions (click here for a succinct summary of the platforms in their own words). So our country’s future is not so much tied up in one person, but in the ideas that an administration of thousands will implement. That’s how our government works.

Here is how Mariam Bell—who has worked at all levels of government for over thirty years—puts it in a recent column: “We vote FOR the 4,000+ political appointees who will run all the agencies, departments and programs. We vote FOR the 3,000+ appointments to boards and commissions the next president will make. We vote FOR all those 300+ who will be appointed to the judiciary, including the Supreme Court — whose rulings will impact our country for the next fifty years, not just four. The next president will appoint a cabinet and has already selected a vice president.”

Ms. Bell rings a bell—a liberty bell.  Most of the liberty-stifling and dangerous policies that have been imposed on America over the past eight years were put in place by unelected political appointees in direct opposition to the will of the people.

This long list of political appointee offenses includes: the corrupting politicization of the IRS and the Justice Department; taxpayer funding of the abortion-and-baby-parts-selling Planned Parenthood; turning the military into a sexual social experiment, even to the point of paying for transgender surgery; federally imposed same-sex marriage; fining religious people for refusing to participate in same-sex ceremonies; forcing nuns to pay for contraception and abortion; forcing public schools to allow boys into girls showers and restrooms; lax border security; failure to enforce immigration laws; pay-to-play at the State Department by a political appointee now running for President (who is again under investigation by the FBI), etc.

You’d rather issue a protest to both candidates by voting third party?  I understand the sentiment, but sentiment can’t change policies or save lives. Only voting for an administration that actually has a chance to win can. As Dennis Prager points out, Christians in the U.S. agreed to align with Stalin to defeat Hitler in WWII.  If we had refused to work with the Soviet Union and instead elected to work with an impotent third party (like, say, Lichtenstein), we wouldn’t have stopped Hitler.  (Prager is not implying that Trump is Stalin, or that Clinton is Hitler — only that if Christians could ally themselves with Stalin to defeat a more dangerous foe, Christians could support Trump to defeat Clinton and her policies).

What guidance does Jesus give us about politics?  Some say, “Jesus wasn’t involved in politics.”

Nonsense.  He spent much of his time on, and saved his harshest condemnation for, the Pharisees who were religious and political leaders in Israel.  (As members of the Sanhedrin, they were some of Israel’s most prominent politicians.)  Jesus excoriated them for tithing their spices but “neglecting the more important matters of the law—justice, mercy and faithfulness” (Matthew 23).  In a reference to straining out debris from drinking water, Jesus charged them with a “straining out a gnat but swallowing a camel!”

What are “the more important matters of the law” today?

Second, the government must not hurt innocent people itself by advocating or promoting harmful policies (like the one’s I’ve listed above).  Unfortunately, our government is not only neglecting its first responsibility to protect innocent life; it’s actually advocating the taking of innocent life by paying for it!  It’s also stifling religious freedom by coercing religious people to pay for abortion and to participate in same-sex ceremonies. (We rightfully allow conscientious objectors to opt out of defending the country in war.  Yet Mrs. Clinton has promised to use political will and the law to change our religious and moral beliefs. So she won’t allow conscientious objectors to opt of financing abortions or performing same sex ceremonies. Talk about straining out a gnat and swallowing a camel!)

If we are going to follow the teachings of Jesus and Paul—if life, justice, mercy and faithfulness are the most important matters of the law—then we should vote these issues above all others: life, national security, marriage, judges, and religious freedom.  Life and national security because it involves the protection of innocent people.  Marriage because it involves the protection and well-being of children who deserve both a mom and a dad.  Judges because they can do great justice or injustice on every issue.  Religious freedom because innocent people and the gospel are harmed when faithfulness is outlawed.

In fact, without religious freedom our ability as Christians to accomplish our primary mission—to know God and to make him known—is severely hampered.  If the government continues to move in the direction it’s been going, we soon won’t be able to preach the Gospel freely.  If for no other reason, Christians have to be involved in politics to prevent the government from harming our ability to live how Jesus commanded us to live and to spread the good news we were put here to spread.

So you may already hate our next President no matter who that is.  But one of them has virtually promised to lead an administration that will continue to fund the destruction of innocent human beings, open the borders, appoint liberal judges, and declare your religious beliefs and actions “hate.”  There are thousands of reasons to cast an effectual vote against that—millions if you count those targeted for death.