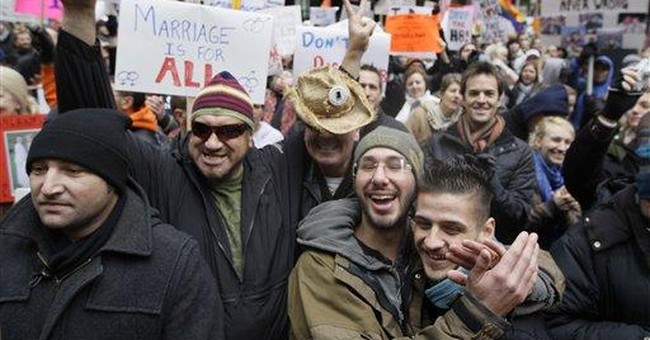 You can watch it here.

The point of the production is to shame the voting public for passing Proposition 8 a month ago, which simply defined marriage in California as between a man and a woman. The musical is clearly intended to spark more “public outrage.” No doubt, more protests, more storming of Mormon temples and Catholic churches and more vandalism against churches will follow. Beyond that, it is likely that more church services will be crashed by same-sex activists—all in the name of “tolerance,” “love,” and “mutual understanding.”

The strategy behind this shaming-of-the-public production is simple: lampoon the supporters of the constitutional amendment into embarrassment so that the next time same-sex marriage shows up on the ballot, they’ll do the “loving thing,” and support it rather than reject it, which is the only one true path to social penance, cultural redemption and liberal forgiveness—at least in the mind of the same-sex marriage crowd.

What’s new about all this is their overt play, albeit erroneously, of the Jesus card. Yes, even the “No on 8” crowd can “get religion.”

At the pivotal moment of the musical, Jesus (played by Jack Black) confronts the “Yes on 8” supporters for their belief that homosexuality is an “abomination,” and lifts a shrimp cocktail to them and says that Leviticus also says eating shellfish likewise is an “abomination.”

He then goes on to say the Bible also teaches that you can “stone your wife,” or “sell your daughter into slavery,” as evidence that you really can’t trust everything the Bible teaches. Or, as in the language of that oft-repeated favorite locution from our skeptical friends, “you can’t take the Bible literally.”

So much for the doctrine of inerrancy. I guess the Word made flesh really didn’t mean everything He said in the Word. Maybe we should put our trust in a non-believer to divine the “good” words from the “bad” words, huh?

Before leaving, Jesus even goes on to affirm, of all things, the “separation of church and state.”

Now these are delightful challenges! As a teacher, I wish more students had the courage to ask them.

Here are a few answers:

The whole point of Leviticus and Deuteronomy was to teach Israel how to separate and become distinct from all they had learned while in Egyptian captivity. They are books of contrast and separation, distinctions and differences. For example, Egypt worshipped death, Israel was called to worship life. The Ten Commandments of Exodus 20 are instructions of how to become different. Holy items shall be “sanctified”—literally, “set apart”—that is, distinct from non-holy items.  Jews themselves, and later Christians, are likewise to be “set apart” for God.

Men and women were created different and distinct, therefore their roles, behavior and even dress should not be confused as the Egyptians did (and many pagan cultures still do).

For example, Deuteronomy 22:11 says, “You shall not wear a material mixed of wool and linen together.” The whole reason being “don’t confuse plant and animal products, they’re different categories, remember that.” There’s painful detail throughout the Bible pounding this meta-theme home.

God created different “kinds” of things, and we must honor His distinctions and not confuse them, for it is an “abomination,” exactly the very thing advocates for same-sex marriage are guilty of.

What about the shellfish? If you read the context of Leviticus 11:9-12, it too is talking about honoring distinctions. God is simply saying, in my paraphrase, “Eat fish, don’t eat bugs. Fish have fins and swim, bugs have legs and crawl. Even if you find things in the water that aren’t crawling, if they have legs, they can crawl—so they’re bugs, don’t eat them. Fish, good; sea-bugs, bad. Honor the distinction.”

The Bible’s statements prohibiting homosexual behavior are rooted in this need to recognize and honor the distinctions—here between men and women.

As far as the “stoning your wife” and “selling your daughter into slavery” claims go, they too have a simple answer. In 1400 B.C., before the law was given to Moses by the hand of God at Mt. Sinai, no nation had any moral code that prohibited a man from killing his wife, wives, or children for any reason. Pagans sacrificed their children to Baal and Moloch, Israel would not. Pagans could kill their families, Israel would not. So, the Old Testament improved the extant moral order by requiring men to go before the elders before any child was to be stoned (Deuteronomy 21:19). And, in all of the rabbinic writings to my knowledge there’s not one instance of the elders ever approving of a single stoning of a child.

Lastly, when you read the full context of Exodus 21:7-11, the “selling your daughter into slavery” slur, it too was an improvement over the ancient moral order. My paraphrase again, “If you sell your daughter off to a man and he becomes unhappy with her, he must give you a chance to redeem her and buy her back, he may not sell her off to foreigners. And if the man bought her for his son, she must not be treated as a slave, but as a daughter.” Like all the other teachings in the Old Testament, this was a big improvement over what was going on among the peoples around Israel.

Come to think of it, it still is—we still have “honor killings” of wayward daughters and wives today throughout the Muslim world.

Like Michelle Malkin, I too am waiting for the “other” Prop 8 musical to come out, as she says, “the one with angry activists storming restaurants and Mormon temples, hectoring elderly people over their signs, and hounding donors large and small until they pay off their tormentors in the name of tolerance. Anyone?”

I’ll bet the “Hairspray” boys won’t be doing that one any time soon.