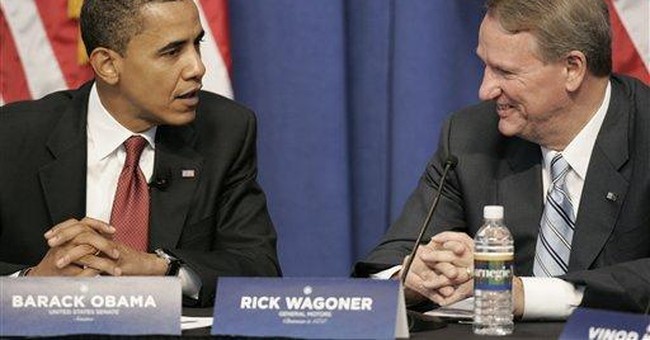 What is wrong with this picture? We learned this weekend that a Spanish judge, Baltasar Garzon, is preparing to prosecute six Americans who worked as senior legal and policy advisors to President George W. Bush - including Attorney General Alberto Gonzales and Under Secretary of Defense Douglas Feith. The alleged crime? The opinions they provided Mr. Bush supported the use of torture against enemy combatants.

Most Americans would find this assertion of what has come to be called "transnational law" to be troubling on several grounds. Its application is an affront to due process and the rule of law in this country. It would criminalize internal U.S. policy-making deliberations, with profound implications for U.S. sovereignty. If allowed to run its course, this prosecution would have a profoundly chilling effect on the willingness of subordinates to provide a president with advice, or perhaps even to serve in government.

One would hope that President Obama would recognize that this use of legal mechanisms as a form of warfare against the United States - increasingly known as "lawfare" - holds serious dangers not just for the country and those who ran it for the past eight years, but for his administration, as well. That would appear not to be the case, however, in light of his choice of Harold Koh to be the State Department's top lawyer.

In fact, as dean of Yale's law school, Mr. Koh has been an unalloyed enthusiast for transnational law. For example, in a 2006 article in the Penn State Law Review, he extolled the "transnationalist faction" on the Supreme Court and the wisdom shown by four, and sometimes five, of its justices in rejecting the impulses of what he disdainfully calls "the nationalist faction":

The transnationalists believe that U.S. courts can and should use their interpretive powers to promote the development of a global legal system, while the nationalists tend to claim that U.S. courts should limit their attention to the development of a national system. Finally, the transnationalists urge that the power of the executive branch should be constrained by judicial review and the concept of international comity, while the nationalists tend to believe that federal courts should give extraordinarily broad deference to executive power in foreign affairs.

How many Americans are aware that some, let alone an actual majority, of the Supreme Court's justices believe that this country should be ruled by something other than the Constitution of the United States, laws made pursuant thereto and treaties clearly consistent with it? Assuredly, few of us know that such an assault on our sovereignty is afoot; in all likelihood, fewer still would support it.

The same would likely apply to Harold Koh's embrace of myriad other controversial transnationalist initiatives. He favors U.S. submission to the International Criminal Court, enabling that tribunal to have the right tomorrow to take up the sort of foreign prosecutions of Americans contemplated by Spain's Judge Garzon today.

Dean Koh goes even further than John Kerry, who argued that American uses of force must meet what the Senator euphemistically called a "global test." Koh believes the United States must obtain pre-authorization by the UN Security Council. In keeping with this view, he condemned the U.S. invasion of Iraq, which lacked such a mandate, as "illegal."

The State Department Legal Advisor-designate has also actively opposed virtually every instrument the previous administration deemed necessary to wage and win the war against terror-wielding adversaries. Koh insisted that Guantanamo Bay be closed coercive interrogation techniques be halted and trials in civilian U.S. courts be afforded to captured enemy combatants. To be sure, these positions largely track with those of President Obama, although the latter has left himself some latitude in their implementation. Koh's critique of the government's terrorist surveillance, though, is even more extreme than that of Mr. Obama, who as a Senator voted to allow the program to continue.

Not surprisingly, Mr. Koh seems untroubled by international accords that assault our Constitution-based sovereignty. These include such onerous and invasive agreements as the Law of the Sea Treaty, the Convention on the Elimination of All Forms of Discrimination Against Women and the Convention on the Rights of the Child. Another candidate could be the Organization of the Islamic Conference's effort to circumscribe freedom of expression by criminalizing speech that "offends" Islam.

It is absolutely predictable that the United States will find itself under ever greater assault in the form of lawfare as notions of the supremacy of transnational law take hold among elites, both here (notably, in the Supreme Court) and abroad. Mr. Obama can spare himself and the country considerable grief when he meets this week in Europe and Turkey with some of the leading practitioners of lawfare by repudiating Judge Garzon's extraterritorial over-reach, rejecting the application of transnational law more generally and selecting a State Department Legal Advisor who is an avowed "nationalist," not a committed "transnationalist."