Vote Early and Often - At the Box Office 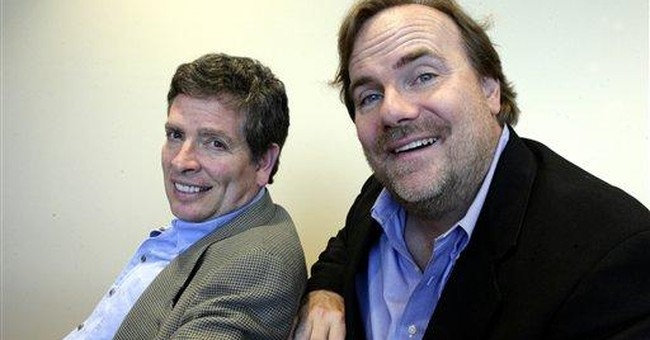 It's election season, so it is appropriate that an important vote will be cast this weekend. No, I am not talking about early balloting in Ohio or Oregon for the November presidential race. Rather, this vote is a national one- and it will be taking place at a theater near you.

This weekend, the returns will be tallied on box-office sales of the opening weekend of An American Carol - a marvelously politically incorrect take-off on the timeless Dickensian morality tale. Set around the Fourth of July in contemporary America rather than a Victorian Yuletide, it has been created and directed by my friend, the zany and wildly successful David Zucker.


This Carol's Scrooge character, played by Kevin Farley, is a dead-ringer for radical leftist filmmaker Michael Moore. The ghosts who visit him - including John F. Kennedy, George S. Patton, and George Washington - labor to teach their subject about the greatness of this country, the absurdity of the "Blame-America-First" Left's toxic hatred for it and the opening the latter provides for Islamists bent on our destruction. Punctuated by trademark Zucker slapstick humor (his other credits include Airplane!, The Naked Gun, Scary Movie 3, and assorted sequels), the movie makes a deadly serious point: Everything is on the line in this War for the Free World and those of us who prize our freedoms will lose them if we fail to protect them against enemies foreign and domestic.

In a sense the pilgrimage Zucker chronicles is an autobiographical one. He had his own epiphany after 9/11, prompting him to break with Hollywood's dominant left-wing politics and reflexive contempt for our government, military, and people (even, amazingly, the movie-going ones). With the passion of a convert, he uses his skills to poke fun at his industry, academia, political and media elites and such mainstays of the radical Left as the ACLU, MoveOn.org, Rosie O'Donnell and, of course, Michael Moore.

Zucker and Farley are joined in this apostasy by other accomplished stars, including Jon Voight, Kelsey Grammar, James Woods, and Robert Davi. Their courage in goring so many of Hollywood's sacred cows is palpable given that community's notorious practice of ensuring that those who are shunned never "eat lunch" (read, work) in that town again.

Amidst the sight-gags, the slapstick (often literally), the absurd moments and hilarious quips, there is a scene that is transcendently important and deeply affecting. After the protagonist has proven infuriatingly resistant to mentoring from JFK and Patton, he is given a tour of St. Paul's Chapel near Wall Street by its most famous parishioner, President Washington. Jon Voight does not act this part; he channels the father of our country. Moore-as-Scrooge comes face to face with the carnage of 9/11 and confronts at last the necessity of taking responsibility for his own destructive actions. It is one of the most powerful pieces of cinematic artistry I have ever seen.

An American Carol is more than a wonderfully entertaining film. It is more even than a forceful political statement on behalf of the values and institutions that have made America, as the bumper sticker has it, thanks to the brave, the land of the free.

David Zucker's new film is also an opportunity - a chance to show Hollywood in the only way it understands that the people of this country admire those prepared unashamedly to stand up for us and the country we hold dear.

For the film industry, opening weekend box office returns determine whether a film is deemed to be a success or not. A big turn-out demonstrates an appeal that will result in more movie theaters showing the film and for longer runs than will otherwise be the case.

Consequently, we have a chance to do something more than properly reward David Zucker and his gutsy team by turning out this weekend to see their movie. In the process, we can demonstrate in a most tangible and impactful way to others in their industry that there is a market not only for this film but for others who revere this country, rather than demean it.

In short, I urge you to take not just your family and friends to see An American Carol. Ask everyone you know to do the same. If possible, do it this weekend and thereby vote in a contest that may prove to be nearly as far-reaching as that whose balloting will take place a month later.

CARTOONS | AF Branco
View Cartoon
The FBI Finally Admitted What We All Knew About the 2017 Attack on the GOP Congressional Baseball Team
Matt Vespa
Why a Liberal Journalist Ripped his Former Publication for its Hit Piece on Conservative Reporters
Matt Vespa
'End of the Era'? What Is CNN's Don Lemon Going to Do Now?
Matt Vespa
Israeli Man Dead, Others Injured as Rockets Launch into Residential Communities
Landon Mion
How Disney World Took a Step Closer In Becoming Magical Again. Hint: It Has to Do With Masks.
Matt Vespa
Wisconsin Teacher Placed on Leave After Video Surfaces of Her Berating Maskless Student
Landon Mion