Josh Hawley Offers a New Vision for the Republican Party

Frank Cannon
|
Posted: Jul 03, 2019 9:43 AM
Share   Tweet
The opinions expressed by columnists are their own and do not necessarily represent the views of Townhall.com. 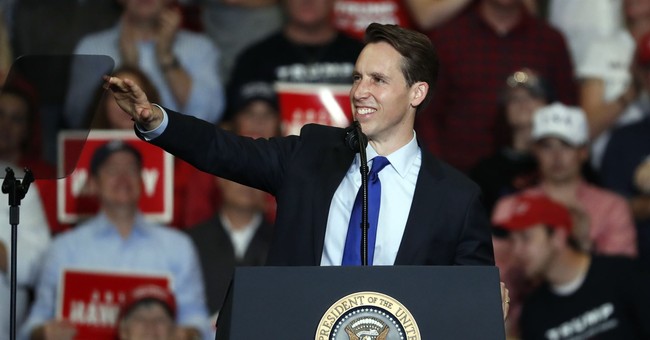 On Monday, freshman Republican Senator Josh Hawley (R-Mo.) penned an incisive op-ed for The American Conservative titled “Restoring the Great American Middle.” Touching on the same themes as his maiden speech on the Senate floor in May, Hawley’s piece identified the key problems facing many average Americans today — “a loss of respect and work, the decline of home and family, an epidemic of loneliness and despair” — and sharply criticized our nation’s elites for largely failing to even recognize these issues, never mind address them. This, he wrote, constitutes “the defining crisis of our time.”

In a rarity for political leaders, Hawley’s diagnosis is exactly right. American society is indeed in crisis, a crisis not captured by GDP growth statistics or stock market prices. It is a crisis instead evident in the fact that marriage and birth rates are at all-time lows, while “deaths of despair” (i.e. deaths via suicide, alcohol and drug overdoses) skyrocket. It is a crisis evident in the fact that for most Americans, real wages have barely budged in decades, as more families get caught in the “two-income trap.” It is a crisis which in 2016 only Donald Trump was perceptive enough to address head on, catapulting him to his surprise election victory.

Unfortunately, despite the direction of President Trump, too few Republican leaders appear yet to recognize this crisis. To Senator Hawley’s great credit, he is one of the few.

But even more impressively, Hawley also shows a solid grasp of the necessary steps to combat this crisis. As he writes in his op-ed, "We need a labor market that offers dignified, rewarding work to every worker who wants it, wherever they are from, whatever degree they have, whether their ambition is to start a business or simply to start a family... [W]e must strengthen the associations that give working Americans control over their lives: neighborhood councils, schools, churches, and co-ops." And, most importantly, "We need a politics that prioritizes strong marriages and strong families, where children know their parents and are nurtured by their love."

Hawley’s prescriptions are right on the mark. The evidence is overwhelming that strong families are the central antidote to a great deal of the social dysfunction which currently plagues our country. And in order to revitalize the family, it is urgently necessary to address the many economic and cultural developments which have led to its widespread collapse.

Moreover, Hawley’s vision also represents an important framework for the future of the Republican Party. As Big Business continues to desert the GOP for the apparently greener pastures of leftist activism, and wealthy suburban voters increasingly join their progressive neighbors in voting Democrat, Republicans need to focus on helping those Americans who have been left behind by an elite class who see them as mere “deplorables.” President Trump’s culturally conservative and pro-worker 2016 campaign is evidence such a platform can be successful, and with a pro-family renovation, this platform could generate an even greater appeal in 2020.

And beyond the short-term, this framework also offers the likeliest path for the long-term viability of the Republican Party. As a soon-to-be-released American Principles Project report will show, the GOP is heavily reliant on married and family-oriented voters for its continued success. A future America with stronger families and communities is one where Republicans are likely to find much support, whereas a continuation of the current trends of collapse and dissolution will only send more voters running into the arms of big-government Democrats.

Judging from his op-ed, as well as the rest of his still young but already noteworthy Senate career, Josh Hawley clearly understands both the perils and opportunities of the present political moment. He has laid out a road forward for the Republican Party to rise to the greatest challenges which confront this country. It now only remains to be seen how many will follow his lead.

Frank Cannon is the president of American Principles Project. You can follow him on Twitter at @frankcannonAPP.