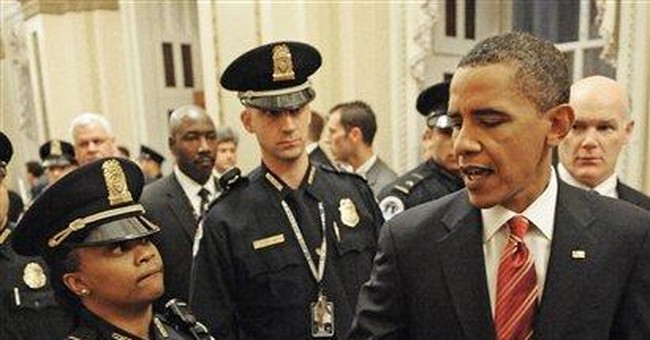 The most annoying part of listening to a speech by the narcissist-in-chief is the number of times he refers to himself.

"I've got a very short commute;" "I can't always visit people directly;" "I break out;" "I saw;" "I knew it would be unpopular;" "I ran for this office;" "I had no illusions;" "I had a whole bunch of political advisors."

The latest State of the Union is no exception. Maybe because his world is so centered on the bubble that surrounds himself, he is incapable of understanding the frustration Americans have about his plans to remake the country.

Clearly, he is not hearing the message to back off. Instead, he is doubling down. Calling with renewed vigor for a litany of unpopular policies, he declared in a condescending tone, "I don't quit."

Obama spent an inane amount of time talking about job creation. His problem is, he doesn't understand how jobs are created. His left-wing fantasies on how to create jobs have had the opposite impact. For example; his plan to sock banks with new taxes as they struggle to recover. He's just like a boxer trying to punch the last knock-down blow

He repeatedly called for a second stimulus bill while we are still reaping the harvest of his first misguided stimulus plan. Then he urged Congress to pass the entire litany of failed regulatory and tax bills that will finish off the feeble recovery and increase unemployment well beyond 20 percent. He renewed his call for Obamacare, which guts Medicare, will increase insurance premiums, and soak the country with higher taxes.

"Change has not come fast enough," Obama exclaimed. "As hard as it may be, as uncomfortable and contentious as the debates may be, it's time to get serious..." Maybe you haven't been serious, Mr. Obama, but we are, and have been serious for a long time. The changes you seek divide Americans and hurt the prospects for our and our children's futures.

In defense and foreign policy, Obama's big new initiative to make us safer is a plan to transform the military into a sexual diversity seminar. He plans to force the armed services to embrace "LGBT" (lesbians, gays, bisexuals and transgender) soldiers. To do this, Congress will have to pass a controversial bill.

The policy change would be a disaster for America's fighting force, as the Center for Military Readiness reports: "Members of Congress are becoming aware that repeal of the 1993 law stating that homosexuals are not eligible for military service, usually mislabeled 'Don't Ask, Don't Tell,' would undermine recruiting, retention, and readiness in our military. More than 1,160 retired Flag & General Officers for the Military have personally signed a statement supporting the 1993 law (Section 654, Title 10), and expressing concerns about consequences of repeal that would 'break the All-Volunteer Force.'"

Another big lie Obama told was, "To close that credibility gap we must take action on both ends of Pennsylvania Avenue to end the outsized influence of lobbyists; to do our work openly; and to give our people the government they deserve. That's what I came to Washington to do. That's why -- for the first time in history -- my Administration posts our White House visitors online. And that's why we've excluded lobbyists from policy-making jobs or seats on federal boards and commissions." How he could say this with a straight face shows the audacity of his deceit. Obama's administration is riddled with lobbyists.

Oh, and how could we forget? He is now a born-again fighter against big government and over-spending.