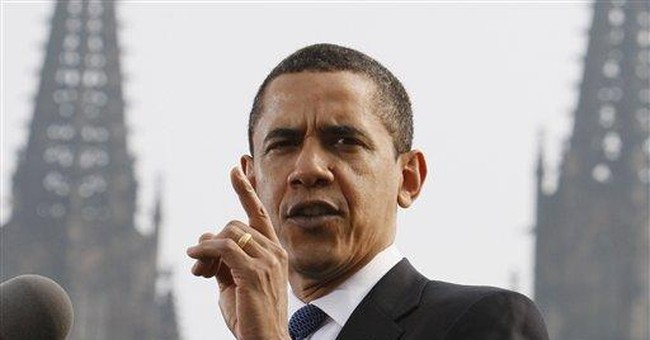 The terrorist release that has garnered headlines is Scotland's release of the Pan Am Flight 103 bomber Abdel Baset al-Megrahi. On his return home, al-Megrahi was fêted as a hero by Libya's President Moammar Gadhafi.

Such merriment is a sad capstone to events unleashed on December 21, 1988, when the flight, full of 259 unsuspecting people from 21 nations, was blown from the sky over Lockerbie, Scotland. We have no ability to assess what dreams died that day. The families of these innocent victims have the right to be outraged.

We also heard outrage from Washington, but we cannot help but feel it is feigned anger. Our assessment after a careful review of Obama administration policy, forces us to conclude that it virtually guarantees future Lockerbie, 9/11 and Khobar towers-type terrorist attacks.

As early as the day after his inaugural celebration, Barack Obama signed a presidential directive ordering the closing of the Guantanamo detention center. Congress rebelled and refused to fund the closing, but the policy impasse is still unresolved. The question of where Obama plans to house terrorists in the USA is an ongoing debate, but the presidential directive to close Guantanamo by 2010 still stands.

The pace of terrorist releases has also quickened under the Obama administration.

Obama released Binyam Mohamed from Guantanamo in February of 2009 where he had been detained since 2004. He was arrested in Pakistan at the Karachi airport in April 2002 for using a false passport in an attempt to travel to the UK. He admitted to training at the Al Farouq terrorist training camp. He was believed by counter terrorism experts to be a conspirator in the Jose Padilla plot to explode a radioactive dirty bomb in the United States.

The U.S. military released a senior Shiite terrorist with close ties to Iran in early June 2009. The terrorist, Laith al-Khazali, is a member of the terror group Asa'ib al-Haq. According to reports in The New York Times, he "played a leading role in a group that killed five American soldiers in Karbala in a sophisticated attack in 2007".

On July 11, 2009, the Obama administration released five members of Iran's Quds Force. These five were involved in supplying and fighting alongside Iraqi Shiite terror organizations. The five men have been in prison in Irbil, Iraq for the past two years. Iran welcomed the men home as heroes -- the celebration included hearty rounds of chanting "Death to America!"

Also frightening is the mass release of Taliban insurgents in Afghanistan, even while our forces there are facing unprecedented escalating violence. According to Reuter's on the 4th of July, "The U.S. military freed 76 Taliban. Another group of 57 were freed early this month, 53 in June, 86 in May and 81 in January."

Former Guantanamo detainee Mohammed Jawad arrived home in Kabul, Afghanistan on Aug. 25, 2009, after his release from prison. The Pentagon charged Jawad with "attempted murder for allegedly throwing a grenade at two U.S. soldiers in Kabul, Afghanistan in December 2002." Jawad was affiliated with the Hazb-E-Islami, a terrorist organization with long-established ties to Osama Bin Laden.

CNS News reported this reaction from former USS Cole Commander Kirk S. Lippold, "They are taking a page right out of the Lyndon Johnson Vietnam playbook, where it's 'let's run things right out of the White House on a day-to-day basis, because we trust no one else in the government to be competent enough, talented enough or dedicated enough to be able to run a major war time effort.'"

Barack Obama is attempting to buy peace with terrorist organizations by negotiating the release of their combatants in our custody. History proves that weakness with foreign enemies only increases hostility and provocations. Coupling the release of terrorists with the Obama administration's misguided attacks against the CIA targeting experts on enhanced interrogation techniques will only lead to more innocent Americans dying.

The Obama policy will be proven a failure in the months ahead but the failure notice will be written in blood.