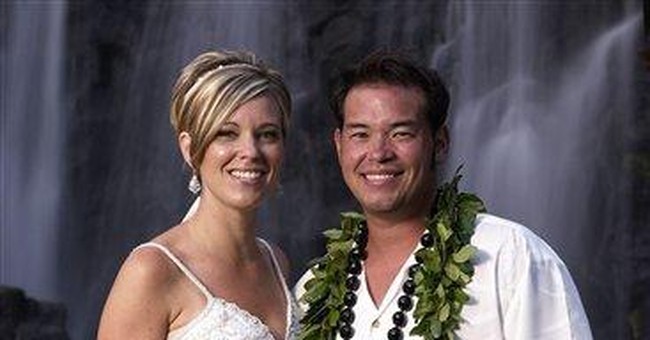 Candid photos laced with the latest gossip about TLC stars Jon and Kate Gosselin are filling grocery store check-out line magazine racks. Headlines scream: "Mom to monster" and question the couple's fidelity. Unfortunately, the couple's eight children from the hit TV reality series Jon & Kate Plus 8 are also stuck in the middle of this paparazzi merrymaking.

The show is produced by Figure 8 Films, a company which claims to have high standards, only producing shows that focus on families and medical marvels. "We are story tellers. Accuracy is very important, as is sensitivity and respect for our subject and our audience." Ironically, these more recent developments seem to fly in the face of the very values that the company preaches, namely, accuracy and ethical journalism.

It is undeniable that since the tabloid explosion, ratings have skyrocketed and TLC reported 9.8 million viewers during the season's fifth premiere. "Conflict equals ratings," says Harvey Levin, host of the gossip show and website TMZ.com. And viewers are tuning in for the drama! Drama at the expense of eight little children, who face the breakup of their family, featured on national television.

In an interview with Kate, she passionately defends herself, "My kids are the reason I have always done everything." But Kate's own brother and sister-in-law question: at what cost to the kids? "They're being exploited," says sister-in-law, Jodi. "And it's time for America to see the situation for what it really is, which is unfortunately, that there are no laws protecting children in reality TV shows. And it's time for the public to be aware of this." Both feel that Jon and Kate are "very blinded by all of this media and... fame and the fortune."

The Pennsylvania Labor Department "is gathering information" after receiving a complaint against the show. Each state has different child labor laws as well as federal laws to safeguard children's welfare. Laws protecting children in the entertainment industry began in 1939 with California's Coogan Law, named after child star Jackie Coogan. Even if the show complies with all of the state's child labor laws, the ethics behind such a show is questionable. No mother or father in their right mind would continue a TV show at the expense of their children.

One big question is, what are the psychological effects on the children and how will it affect their childhood in general? Emotional family members plead with America to stop watching the show, to stop endorsing the exploitation of these innocent children. Jon and Kate are utilizing their eight children for television gold. In return, they gain fame (or infamy) and fortune.

Every move they make is calculated, a publicity stunt. Sister-in-law Jodi says in Us magazine that what the viewer sees is not reality. "They will only show what they think people want to see and it isn't real anyway. Don't believe everything you see," she adds. "The children are also being prompted to say or do certain things. They signed their lives away to TLC and they will continue to spin the show to keep the viewer's interest. I don't believe this show will go away until the viewers decide that they don't want to be played anymore."

"There is also a lot of conforming pressure on Jon and Kate to give the audience what they believe the audience wants. That's not good for the kids," says Los Angeles psychologist Geoffrey White, a consultant for numerous reality shows. "The implications for shows like Jon and Kate are frightening, and there is no university ethics committee providing oversight. They're amateurs in a professional activity. That's my big concern."

Sharing a glimpse of insight he himself should realize, Jon explains, "The world isn't about ratings and TV. It's about happiness and love ... and family and God."

Although some say this reality show is trampling new territory, PBS made the ground-breaking show, An American Family in 1971, airing on TV in 1973. Billed as a documentary, the show followed the Loud family, a middle-aged couple with five teenage children living in Santa Barbara, Calif. In 12 shows, it chronicled their lives, including the couple separating and the wife filing for divorce. The "documentary" affected the family very negatively. Oldest son Lance Loud said, "Television ate my family," in regards to the sudden fame and hurtful criticism they received.

When discussing the Loud family, Professor William Doherty said "the whole country watched them fall apart. We forget that cultural lesson -- this kind of putting a family under a microscope often destroys what we're looking at."