Time for Nancy Pelosi to Resign 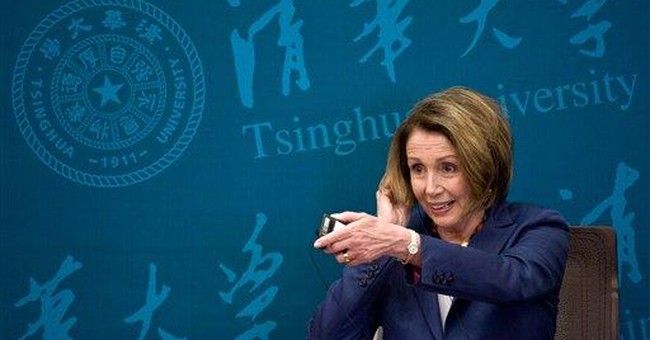 Speaker of the U.S. House of Representatives Nancy Pelosi is losing the credibility battle, but that's not all she stands to lose -- her speakership is on the line.

"We were not, I repeat, were not told that waterboarding or any of these other enhanced interrogation methods were used," Pelosi emphatically told the American people on April 23. Three weeks later when that statement unraveled, Pelosi's behavior became bizarre, insisting her congressional colleagues, the director of the CIA and government personnel are all lying.while only she is telling the truth. "They mislead us all the time," she said referring to the CIA. However with that statement, she tightened the noose on her own career.

Former Speaker of the House Newt Gingrich described Pelosi's actions as "despicable" and "dishonest", calling for her to step aside from Congress. "I think she has lied to the House, and.I think this is a big deal. I don't think the Speaker of the House can lie to the country on national security matters."

Gingrich went on to say: "She is a trivial politician, viciously using partisanship for the narrowest of purposes, and she dishonors the Congress by her behavior... This is really, really dangerous, and it is going to get a lot of people killed, if we don't call a halt to it."

CIA records show Pelosi and Congressman Porter Goss, along with the leaders of the Senate Intelligence Committee, were briefed in September of 2002 on the use of enhanced interrogation techniques (including waterboarding). The CIA's version is verified by Goss, who later became the head of the CIA from 2004-2006. Goss writes in The Washington Post, "Since leaving my post as CIA director..I have remained largely silent on the public state. I am speaking out now because I feel our government has crossed the red line between properly protecting our national security and trying to gain partisan political advantage."

Pelosi then admitted that she was briefed by an aide in 2003. This is an abrupt change from her previous statements about water boarding, but she still alleges the CIA was lying about the September 2002 briefing.

Increasingly, Pelosi is caught in a web of deceit of her own spinning. Current CIA Director Leon Panetta's statements also confirm what she knew, and when she knew it. "As the agency indicated previously in response to congressional inquiries, our contemporaneous records from September 2002 indicate that CIA officers briefed truthfully on the interrogation of Abu Zubaydah, describing the enhanced techniques that had been employed."

Why is this discussion significant? George W. Bush and his people did what their hearts and heads told them was essential to protect American lives in 2002. Aggressive interrogation was absolutely essential to getting information that would keep Americans from being slaughtered by mass murderers like Zubaydah and 9/11 mastermind Khalid Sheikh Mohammed (who was also water boarded with good results.) The Democrats' storyline says the Bush administration was secretly practicing "torture" by water boarding, without any congressional oversight or approval. Liberal Democrats are portraying the Bush administration as rogue war criminals, while their party bears no responsibility, and had no knowledge of what was going on. But as the old expression goes, "Facts to liberals are like crosses to vampires."

Rather than addressing the issue and apologizing for lying about our intelligence professionals, Pelosi is hoping the public will forgot about the whole controversy and it will fade into the night. Yet that is not likely.

Pelosi is quickly becoming a political liability. Her approval rating stands at 39 percent, well below her party's congressional approval rating of 51 percent. Pelosi has weathered political scandals in the past, but this time her luck may have run out.

If Obama and Democrats in Congress don't force her to vacate her post, they are being incredibly hypocritical. They will be standing by a woman in leadership who passively supported enhanced interrogation techniques, "torture" -- and then lied about it -- while blasting a former president who was truthful about his support for water boarding.

Bush, Cheney and the CIA protected American lives. Pelosi has attempted to undermine the credibility of those who kept us safe, in order to save her own job and status. Furthermore, her behavior flies directly in the face of Obama's promise of a new era of integrity in politics, and he shouldn't stand by her while she lies. Pelosi needs to step down, or the Obama administration and their allies in the House should end Pelosi's disgraceful political career.