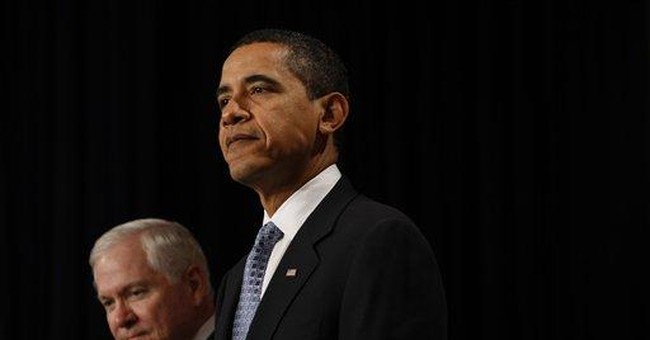 Barack Obama is ignoring the words of the Democratic Party's founder, Thomas Jefferson, who warned, "A democracy is nothing more than mob rule, where fifty-one percent of the people may take away the rights of the other forty-nine."

The mob is in the form of nightly polls taken by President Barack Obama's political advisers. According Ben Smith of Politico.com, "Data from pollsters Joel Benenson and Paul Harstad has become increasingly important to shaping the White House's message as the crucial battle over the president's budget intensifies." Smith quotes one source familiar with White House efforts as saying, "The pace [of polling] is picking up."

The clearest reaction to the mob has been Obama's rush to can CEOs who are unpopular. Liberal movie maker Michael Moore, giddy about Obama's recent decisions, wrote, "Did Obama really fire the chairman of General Motors?.Can he do that?... Obama has issued this edict: The government of, by, and for the people is in charge here, not big business. He has the massive will of the American people behind him -- and he has been granted permission by us to do what he sees fit."

Jefferson and his fellow Founding Fathers held a deep rooted fear of what they called "mob rule." If the people's passions rule there will be no rule of law. Protecting individuals and their personal property, their labor, and their plans for the future is a primary function of government. They believed the government should never steal from the unpopular few and redistribute to the masses. The Founders embedded these rights in the Constitution. They believed the rights of life, liberty and property where given by God and should be protected from the power of government.

Obama didn't recently come to his desire to redistribute income. In an interview given to Chicago Public Radio in 2001, then-State Sen. Obama said "The Supreme Court never ventured into the issues of redistribution of wealth and sort of more basic issues of political and economic justice in this society. To that extent, as radical as I think people try to characterize the Warren Court, it wasn't that radical. It didn't break free from the essential constraints that were placed by the Founding Fathers in the Constitution, at least as it's been interpreted, and the Warren Court interpreted in the same way, that generally the Constitution is a charter of negative liberties."

His firing the CEO of GM prompts the legitimate question that Michael Moore asked, "Can he do that?" Moore's justification for this unprecedented expansion of federal powers must be the same that Obama and his team are using: "We got elected so we can do whatever we want."

Obama's team sees America as a nation where might makes right; the will of the people as expressed through our visionary leader Obama is all that matters. An America without the restraint of power is dangerous. His arrogance towards the Constitution and our founders is astounding. But, it doesn't matter to him because he received more votes.

The day after the GM firing, Treasury Secretary Timothy Geithner made the statement that the administration is open to firing other CEOs as well. Later, Rep. Barney Frank pushed a bill through the House Financial Services Committee that will allow the administration to set the salaries for all employees working at companies that have received federal money.

Obama is using the mob-incitement tactics of his mentor, Chicago organizer Saul Alinsky. The flash point he used was justified citizen outrage over AIG bonuses. Now he has claimed for himself the right to fire people in private businesses. Using his new-media outreach program and his e-mail database of 13 million people, Obama is further attempting to influence policy changes through protests outside AIG offices. He has even organized targeted doorbelling activities in support of his plans.

Obama's expansion of presidential powers should be very troubling to all Americans. Benjamin Franklin wrote, "Democracy is two wolves and a lamb voting on what to have for lunch. Liberty is a well-armed lamb contesting the vote!"

Legalized plunder is gaining popularity. In the words of Patrick Henry, "The Constitution is not an instrument for the government to restrain the people; it is an instrument for the people to restrain the government -- lest it come to dominate our lives and interests." If freedom-loving Americans don't take a stand, our precious liberties may be lost forever.