The Real Reason Newspapers Are On Life Support 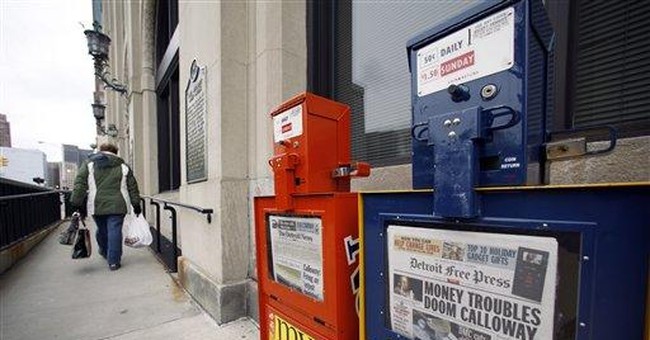 The newspaper business is in trouble and for good reason. On March 19, according to the Philadelphia Bulletin, "A lawyer involved with legal action against Association of Community Organizations for Reform Now (ACORN) told a House Judiciary subcommittee. The New York Times had killed a story in October that would have shown a close link between ACORN, Project Vote and the Obama campaign because it would have been a 'a game changer.'"

Recently Barack Obama, a guest on the Jay Leno show, stuck his foot in his mouth by telling an insensitive joke featuring the Special Olympics, forcing him to apologize. The Internet instantly was abuzz about Obama's failed joke. The White House quickly issued a statement saying he was merely joking and didn't mean to disparage the developmentally challenged. The incident was widely covered and drove the online news cycle for nearly 24 hours. Oddly, the newspaper that claims to cover "all the news that is fit to print," missed it. The New York Times' Helene Cooper, while covering Obama's appearance on the show, failed to mention his blooper.

For Cooper not to mention it, even in passing, shows she was engaged in a type of politically motivated censorship. A more serious dereliction of duty is The New York Times' decision to forgo printing the ACORN story prior to the fall election. Editors who made this decision were violating the long- influential paper's mission statement in order to influence a political campaign.

Recently the Seattle Post-Intelligencer, a paper we can describe as left of The New York Times from years of reading it, ceased printing and went Web-only. The reason they said they stopped delivering the daily news on doorsteps was a shortage of advertisers and readers. The P-I management would have us believe both disappeared because of Internet competition, claiming to be victims of technology.

We think the newspaper's killer is more profound and not only the result of technology changes. A politically correct and liberal-biased newspaper industry that engages in censorship is the real reason for the industry's woes and decline. Many so-called "mainstream" newspapers are biased in favor of political liberalism, thus driving those who want a more complete reporting of the news to the Internet.

Citizen journalism, blogging and news sites both left and right are flourishing online. In fact, the online news audience is soaring, according to a report in Editor & Publisher. This growth online is depressing to longtime print journalists. Indeed, according a March 2008 article in The New Yorker, Bill Keller, executive editor of the Times, in a speech said, "At places where editors and publishers gather, the mood is funeral. Editors ask one another 'How are you?' in that sober tone one employs with friends who have just gone through rehab or a messy divorce."

The real crisis is in trust. Americans don't trust the newspapers because the premise that they are unbiased has been so totally discredited by recent scandals and blatant censorship. A study from Sacred Heart University found that fewer than 20 percent of Americans said they could believe "all or most" media reporting, a figure that has fallen from more than 27 percent just five years ago.

In the article titled "The Incredible Shrinking Newspaper," published online by Slate, Jack Shafer argues that the seeds of the great newspaper decline were planted more than 80 years ago. At that time, "radio challenged the newspapers' status as the only mass news, entertainment, and advertising medium." He surmises that the emergence of each new media technology -- the car radio, television, the portable radio, FM, cable, the VCR, the Internet, the cell phone, satellite radio and TV, the podcast, et.al- "has delivered another kick to newspapers."

But we believe that part of the success of these alternative mediums of communication is that they have not been dominated by the political left. AM radio has had a renaissance since the late 1980s precisely because it allowed for more diversity of voices, and conservatives were able to build an audience. Cable news is dominated by Fox News because they allow right-of-center voices on the air together with the usual liberal voices to create a more vigorous discussion.

If newspapers really want to regain relevance, they will print news that is not so easily dismissed as liberal. Likewise, they should cover a wider variety of stories that interest all audiences including conservatives. Shareholders of large public media companies should demand it. Here lies the path to relevance and healthy financial renewal.