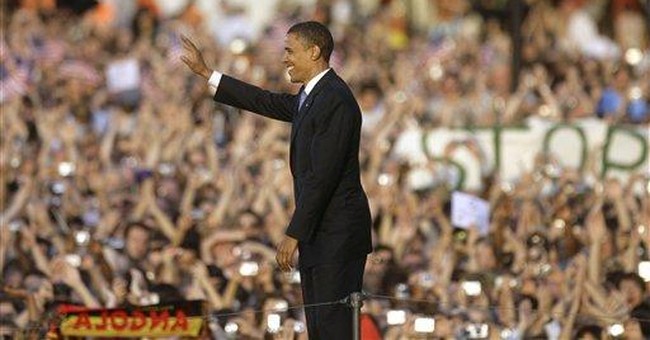 "I'm not ideological at all," Markos Moulitsas, the publisher of Daily Kos told The Washington Monthly in 2006. "I'm just about winning." It appears that his zeal to help Obama win, Markos Moulitsas, will do anything. He was chosen by the Obama campaign to release the Obama certificate of live birth, which has stirred so much controversy in the blogosphere.

The far-left Moulitsas has caused much uproar with his antics. In 2003, after a cheering Iraqi mob dragged the charred and mutilated bodies of American contractors throughout the streets of Fallujah, Moulitsas said of the contractors, "I feel nothing...Screw them."

"My long term view is about building a movement with an ability to affect media coverage and the media narrative, Moulitsas said in 2006. "The long term goal is a progressive governing majority." At the time, he was out promoting his book, "Crashing the Gate: Nettroot, Grassroots and the Rise of People-powered Politics."

Lee Drutman of the Los Angeles Times called the book, "Power to the people with a political takeover plan." Drutman noted, "The progressive blogosphere is starting to feel its own strength -- in the continued growth of Web traffic, in its powerful fund-raising capacity, and in the rise of its man, Howard Dean, as Democratic National Committee chairman."

Netroot activists like Moulitsas began blogging because they felt left out. They couldn't crack the closed doors inside the Beltway of Washington. With the impending nomination of Barack Obama, this has changed. Now that Washington has seen how much buzz and money these bloggers can raise, the tables have turned.

Politicians now seek out Moulitsas. Democratic strategists are turning to bloggers for help with everything from promotion to policy. With their influence has come the power and, for Moulitsas, celebrity status. "We said we wanted to crash the gates. We never said we weren't going to come in."

His third-annual conference, Netroots Nation, had a star-studded line-up of speakers: Gen. Wesley Clark, now famous for his news conference attacking fellow veteran John McCain, House Speaker Nancy Pelosi and Howard Dean. However, let us not forget the surprise guest who sent the attendees over the moon with at least three standing ovations, Al Gore.

Barack Obama attended the conference last year. This year he sent a video of himself and several aides because he was preparing for his world tour of Afghanistan, Iraq, the Middle East and Europe. Now Moulitsas sits on conference calls with Harry Reid and regularly visits by phone with other Democratic leaders.

The mainstream media have helped give him credibility and legitimacy. He appears on CNN, has written for Newsweek and others. He was named one of the 100 Most Influential Hispanics in the world by People en Español. He ranked third on Forbes' Web Celeb 25 rankings ahead of Matt Drudge. He was listed 26th in PC World's list of the Most Important People on the Web.

Moulitsas was born in 1971 in Chicago of an El Salvadoran mother and father of Greek heritage. He returned to live in El Salvador for a number of years as a child. Returning to the United States, he became a soldier in the U.S. Army before earning a college and law degree. However, becoming a practicing attorney was not for Moulitsas. Instead, he worked for several Web firms and he started his blog in 2002. In 2004, he supported Howard Dean's presidential campaign, and presently lives in Berkeley, Calif.

"Netroots are the crazy political junkies that hang out in blogs," Moulitsas told Newsweek in 2005. "They're people who use technology to participate in politics. They do a lot offline, but they do their organizing online."

These netroots bloggers are the shock troops on which the Obama campaign relies to carry its message and case to America.