I Am A Woman. I Worked on Wall Street. The Fearless Girl Statue is Strange.

Erielle Davidson
|
Posted: Mar 13, 2017 12:01 AM
Share   Tweet
The opinions expressed by columnists are their own and do not necessarily represent the views of Townhall.com. 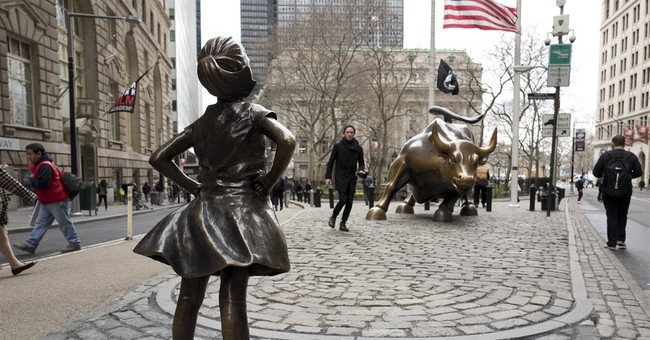 In honor of International Women’s Day, State Street’s Global Advisors have temporarily installed the statue of a young girl, opposite the iconic Wall Street bull in Manhattan. According to the firm, the statue was meant to serve as an appeal to encourage State Street’s clients to hire more women on their corporate boards.

The young girl, resolute in her defiance, stands opposite the famous “Charging Bull” with her hands placed firmly on her hips. According to the artist of the piece, Ms. Visbal, “This is a piece of work all women of any age, shape, color or creed can relate to…A work which reminds us today’s working woman is here to stay and has taken her place in the nation’s financial district.”

As a former analyst of a financial institution on Wall Street, I found Ms. Visbal’s suggestion somewhat odd. I had never envisioned that my status as a woman meant the Wall Street Bull was incapable of representing me—that I needed a separate statue, and a young, prepubescent girl, at that.

I recall my first week as a bond rater, when my firm took my hiring class on a historic trek through Wall Street. The organized endeavor was part of a larger effort not only to foster relationships within the hiring class but also to cultivate an appreciation for the magical enigma that is Wall Street. At the conclusion of the outing, when we all posed for a photo next to the iconic bull, it never occurred to me that the spirit of Wall Street—embodied by the bull—was decidedly not for me.

When first installed at Bowling Green in 1915, the choice of a bull was a deliberate nod to the term “bull market,” a market in which investors are optimistic and returns are strong. Italian artist Arturo Di Modica first conceived the bull in search of a way to capture the sprit of New York City, which he felt offered the prospect of success to anyone willing to work hard, irrespective of country of origin or creed. Whereas the bull was and is representative of the scrappy attitude that unites those on Wall Street, the young girl is a reminder of what divides us—gender.

I can appreciate and understand the sentiment behind the Fearless Girl. Indeed, the issue of female diversity within the financial industry is very real. But the statue’s placement and posture suggests wholeheartedly that women are not only distinct from the culture of Wall Street but also in direct opposition to it. Gail Collins from the New York Times argued that the little girl embodied the message now pervasive on the Left of “resistance.”

However, if we women envision ourselves as integral to the fabric of the Wall Street community, positing ourselves as resistant to its very icon seems pointedly strange. Should the female statue not be standing beside the bull? Or the better question might be, have we traversed so far down the path of identity politics that we no longer find strength in identifying universal values but rather, in identifying demographic differences?

The Fearless Girl statue brings up a fundamental question circulating in politics today—do we unite people by discovering and relishing shared experiences and beliefs or do we single out groups of people in an attempt to celebrate individual characteristics belonging to some but not all? Better yet, is there a way to do both? There is, but I don’t believe the particulars of this statue—with its positioning, posture, and juvenile stature—achieve the desired result.

I looked at the Charging Bull with pride from my office, as emblematic of the plucky and determined culture I had come to embrace. I reject the notion that, in erecting a statue of a female in Wall Street, I am supposed to feel more “welcome” on turf I already call my own. The precise opposite is achieved. I am reminded that Wall Street is a spectacular space—and I am a perceived foreigner within it.