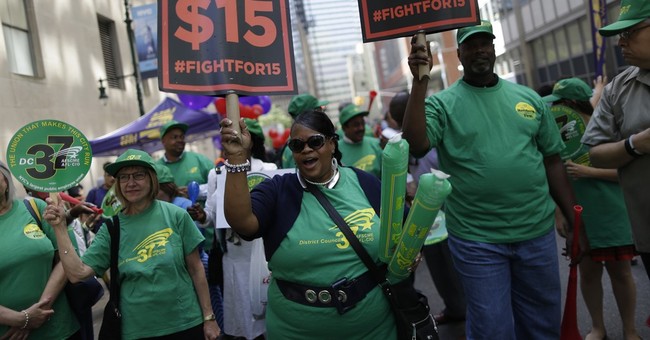 The “Fight for $15”, a union-backed campaign to boost the minimum wage for fast food workers, continues to make waves in cities and counties across the country. And although more than 20 cities and counties have raised their minimum wage, many to the group’s preferred level of $15 an hour, even that isn’t ambitious enough for many on the Left. In fact, many liberal special interest groups view raising the minimum wage as just the first step toward imposing an even higher, arbitrarily determined “living wage” mandate. Yet despite all of the supposed economic benefits that these left-wing groups claim a higher minimum wage will bring, not everyone is convinced and an unlikely pair of groups is already asking the government for an exception.

Although unions are often one of the loudest and most active players in the “Fight for $15” public relations campaign, their behind the scenes maneuvering suggests a different attitude towards the minimum wage.

In Los Angeles which recently agreed to raise its minimum wage to $15 by 2020, big labor unions like the AFL-CIO have already aggressively lobbied for exemptions from these higher wages. If you think that sounds a little bit ironic -- even hypocritical – you aren’t alone. But a closer look reveals why some union officials are saying one thing when it comes to the minimum wage, but doing another.

It’s no secret that union membership is dwindling across the country, as many traditional union professions have either been outsourced, out-competed, or simply out-innovated out of the economy. As a result, union bosses are searching for ways to bolster their ranks, and more importantly, their bank accounts. One strategy unions have employed is to try and expand their reach beyond traditional manufacturing and government workplaces into less traditional sectors such as fast food and hospitality.

By securing an increase in the minimum wage – and then successfully lobbying for an exception to the wage mandate for union workers, Big Labor will have the ability to contract with the large hotels or fast food chains to provide lower priced union workers. Other businesses or individuals simply looking for a job will still be forced to work at the government mandated wage, which will make non-union workers more expensive than union work. In essence, this approach would allow unions to price non-union workers out of market by subjecting them to artificially high mandated wage rates – rates that unions would have an exclusive right to undercut.

So much for higher wages for all workers.

Although proponents of higher minimum wage often portray their opponents as corporate fat cats, workers across multiple sectors are beginning to understand the harm that mandated wages can cause, and they are taking action.

In the local theater community of Los Angeles a group of actors and other employees sued the Actor’s Equity Association to prevent a $9 minimum wage from applying to theaters smaller than 100 seats. The actors rightfully understand that mandating higher labor costs will cause many theaters to shut down entirely, as theaters will be unable to pass along these higher costs on to their customers. And remember, we are talking about a $9 an hour minimum wage here, not the $15 one that will be law in Los Angeles come 2020.

Both attempts for special exceptions to these job killing wage mandates highlight the many problems that arise from government interference in negotiations between individuals and employers when it comes to compensation. But don’t take my word for it, take it from Rusty Hick, head of the Federation of Labor, who ironically argued in favor of a union exemption from the minimum wage by noting that free contracting “[a]llows each party to prioritize what is important to them……the option, the freedom, to negotiate that agreement. And that is a good thing."

Unfortunately, Mr. Hick doesn’t feel the same rules should apply to workers who don’t belong to a union, or the community actors who may have to close the curtain permanently if they are subjected to the “benefits” of a higher minimum wage.