The Death of Meaning

Eric Metaxas
|
Posted: Feb 08, 2021 12:01 AM
Share   Tweet
The opinions expressed by columnists are their own and do not necessarily represent the views of Townhall.com. 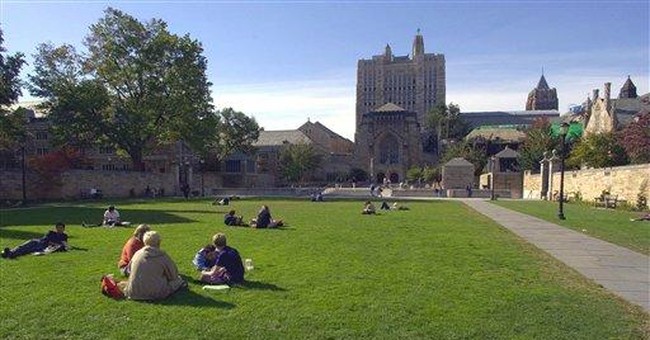 At the heart of Yale is the Sterling Memorial Library, built in the late '20s for $17 million—an astonishing amount at the time.

As anyone can see, it was intentionally designed by James Gamble Rogers to look like a great cathedral. Immediately upon entering through what look like cathedral doors, one finds oneself walking a long narrow aisle leading to what looks like an altar, above which Rogers placed what he called the “altar mural.” Its main figure looks strikingly like the Virgin Mary, but reveals itself to be a personification of “alma mater”—“our mother”—but of course the mother is Yale herself. The whole affair, while not necessarily mocking religious art and architecture, comes asymptotically close. Indeed, the long, narrow passageway leading to the “altar” is called the “nave,” just as in a cathedral, and the part that looks like a chancel is called “the chancel.”

It all begins to make sense when we learn that in 1926, Yale abandoned mandatory chapel services, scuttling plans for a new chapel across the quadrangle from the library. Rogers brightly thought he could take advantage of this by incorporating the larger ecclesiastical theme into the library, and of course did, using stained glass and other details to make the building look unmistakably like a cathedral. Except it was the first building ever to do so that was not actually a cathedral. So it was a daring statement in its day. Many found it sacrilegious and deeply offensive, as what it did was overtly secularize what was once strictly ecclesiastical, while cheekily imparting the elements of religious faith to the secular.

I remember walking along the “nave” toward the circulation desk—the running joke is that one need not “genuflect” there—and then turning right and coming to a beautiful cloistered walk with medieval-style carvings, each of which mocked student life. One depicted a student drinking a mug of beer beneath a curvaceous pin-up, another a student snoozing over his books; and another a student listening to the radio, the student distraction of that day. If this building was a secular temple to learning and knowledge, it seemed a curious thing to come upon these literally lapidary homages to adolescent snickering at the idea. But it was the fourth sculpture that took the joke a step further. It struck me personally, when I first saw it, and is the only one that depicts a student reading a book. But what the book says is extraordinarily cynical, if not positively dark. The carved book’s left page has the letters U, R, and A carved into it. The right-hand page bears four letters, two on the top and two below:

Of course on one level it’s simply a joke itself. But it also seems to be saying that if you are the sort of earnest fellow who—unlike the other three—actually goes to the trouble of studying, you will find that at the end of all knowledge is something surprising and perhaps quite troubling. And that is the idea that you are yourself a joke. And not merely because you are fool enough to bother with studying when ogling, snoozing, and entertainment are available, but because after all your struggles you will discover that at the end of everything is the idea that your very existence is itself absurd. In other words, we have at last found that at the end of the search for truth and meaning is the idea that there is no truth and no meaning. So the joke is on you. And furthermore, if you understand the implications of that, you are yourself a joke. In other words, we finally “know” that the universe has randomly and accidentally produced you, who are concerned with searching for the meaning to your existence and life, only to discover in the end that there is no such thing. Isn’t that funny? So not only are all the hoary truisms you’ve heard nonsense, but more vitally the end of our search for meaning is that there is no such thing. The joke is on us—and we are the joke.

When these carvings were done in the '20s, this notion was generally accepted in the elite precincts of academia. After all, Charles Darwin had shown we arose from nothing by blind chance, and there was no “God” behind our creation. And Einstein had helped us see that everything is relative, such that nothing is subjective, and objective “truth” is a mirage. And Freud helped us see that at the heart of all we do is not something noble and transcendent, but merely the desire to perpetuate the species, as expressed in the sexual impulse.

But once we knew that we were mere accidents, bubbled up by chance through the eons, what to do? The decision—as evidenced by these carvings— seems to have been not to take it too seriously. We might as well all have a good laugh. Just because we now know life has no meaning, we don’t really want to commit suicide, do we? There was at least some fun and pleasure to be wrung from our meaningless existences, so let’s grab that while we still might. What’s more, we can do it with no guilt, knowing that all those old moral codes were so much pious foofaraw. Now at last we knew what was what, so everything could essentially be seen as a joke, and could be held—as if by hermeneutical tweezers—in quotation marks of perpetual irony. I later assumed such ideas came to Yale and the cultural elites in the tumultuous '60s—until I read William F. Buckley’s God and Man at Yale, published in 1951, about the Yale of the '40s; and we may now see these notions were already in stone in the '20s.

Of course I had never encountered such ideas in my working-class immigrant world and had come to Yale really wanting to discover the meaning of life and the secrets at the heart of the universe. Yale’s motto is “Lux et Veritas”—Light and Truth—and I was innocent enough to take that seriously, to hope to be enlightened by my education, as I had been to some extent at Trinity. But as the weeks and months at Yale passed I realized I was many decades out of step, and that the real thing I was to learn was that these things were ancient fictions whose usefulness had passed, at least for those willing to face it.

See how this story ends. You can purchase a copy of Fish Out of Water: A Search of the Meaning of Life (Salem Books) here.  Eric Metaxas is New York Times #1 bestselling author. He is the host of the Eric Metaxas Radio Show, a nationally syndicated radio program heard in more than 120 cities around the U.S. Learn more at www.ericmetaxas.com.