Erick Erickson
|
Posted: Aug 14, 2020 12:01 AM
Share   Tweet
The opinions expressed by columnists are their own and do not necessarily represent the views of Townhall.com. 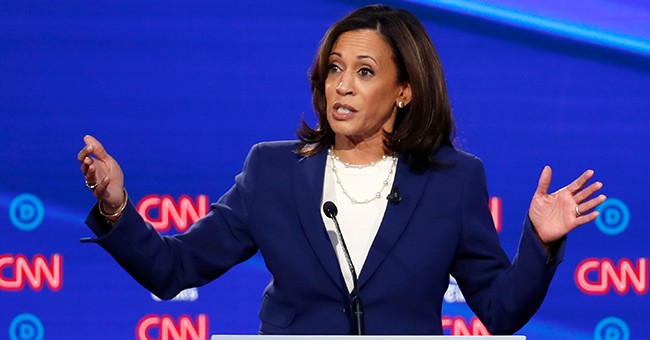 With the announcement of Sen. Kamala Harris as Joe Biden's vice-presidential pick, Democrats and the press would have us believe she is a safe, moderate choice. They would have us believe that Harris is pragmatic, to the right of Sen. Elizabeth Warren and grounded in the establishment -- someone who will not rock the boat. Some on the right are pointing to activists on the left who are unhappy with this pick. But Harris and Warren were the two choices who could very much ensure that people who do not like President Donald Trump will go vote for Trump, or at least not vote for Biden.

Vice presidential picks do not generally matter, but many voters think Biden will not last a term. That sounds crass, but it is true. Voters look at Harris as a possible future president, not just filler to lock down part of the base. She actually matters more than Vice President Mike Pence or, frankly, Joe Biden when he was Barack Obama's vice president.

As for Harris herself, the problem is not that she is too progressive. It is that she is no leader. She is a follower of the woke mob. Harris can easily be led by the mob to do bad things.

In California, she believed she needed to be a law-and-order tough woman to become attorney general and then senator, so she pursued criminals ruthlessly. She threw a lot of young Black men in jail for marijuana possession to show rich, white Californians that she was not like other San Francisco liberals. She ignored prosecuting those whose crimes could ruffle the feathers of constituencies she thought she needed. Then she got to the Senate and needed to show the left she was fully woke, so she went overboard arguing that someone's sincere Christian faith should be enough to block that person from the judiciary.

On the campaign trail, Harris went woke, embracing the entire range of left-wing policy proposals, from executive orders for assault-weapon bans to universal government-run health care to advocating for illegal aliens. Harris' campaign cratered because she and those around her became obsessed with lining up with Woke Twitter, having no core values on which to stand.

This came to a head when Harris said she believed Biden's accusers. Now she does not. Harris is a progressive opportunist. She will take any stridently progressive position to get herself power and abandon those positions, if necessary, to keep acquiring power.

The media is not going to ask Harris how she could be the vice president of a man she believes committed sexual assault. When you combine the media's issues of accountability for left-leaning candidates and willful refusal to paint an accurate picture of the mob violence happening in major cities with Harris' own covetousness of power through progressivism, you get the makings of the left's own version of Trump.

Americans should hesitate to embrace candidates who will say or do anything to get elected, and Harris is such a candidate. Her worldview orients her toward strong governmental power, and that is going to be off-putting to independent voters who do not like Trump at all and would prefer to vote for Joe Biden but cannot put an ambitiously progressive opportunist such as Harris so close to the presidency.

Gov. Gretchen Whitmer, Gov. Michelle Lujan Grisham, Mayor Keisha Lance Bottoms and a host of others have more executive leadership and ground their governance in pragmatic coalition-building, not woke mob guidance. I may not care for any of them, but they don't concern me in terms of raw ambition and progressive rudderlessness.