Erick Erickson
|
Posted: Oct 05, 2018 12:01 AM
Share   Tweet
The opinions expressed by columnists are their own and do not necessarily represent the views of Townhall.com. 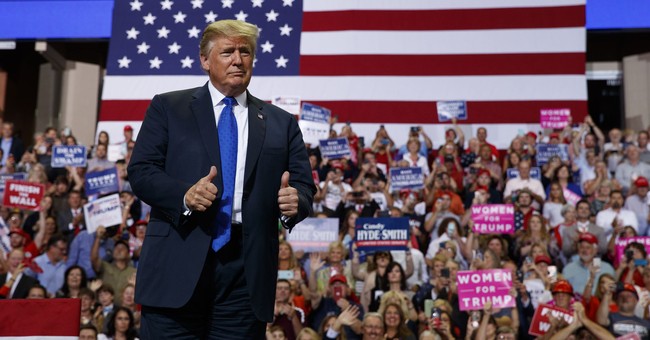 I have wobbled back and forth on the idea of supporting President Donald Trump in 2020. I opposed him in 2016 and voted third-party. The candidate I supported, Evan McMullin, has, like so many others, abandoned all his values as his hatred of Trump poisons his conscience. I dare say the worst mistake in my life was not when I climbed a mountain only to remember I was scared of heights, or when I played with a scalpel that nearly cut off my finger as a kid. It was voting for McMullin.

Jennifer Rubin, who the Washington Post fraudulently claims is a conservative, has become the most predictable mouthpiece for the insanity that has affected a certain brand of Republican. They view Trump as anathema to their values, so they have abandoned their pre-Trump values. Rubin once favored moving our embassy in Israel to Jerusalem. She now opposes it because of Trump. She once supported withdrawal from the Paris Accord, but now opposes it because of Trump.

I have long been critical of Republicans who abandoned principles to stand with Trump, and I am as critical of Republicans who abandon principles to oppose Trump. Principle should stay, because people go. The Kavanaugh nomination has been clarifying in this regard. Seeing some conservatives aid and abet character assassins because Trump nominated Kavanaugh is disgusting.

I find myself in an odd position where, for the first time, I see myself, one of the original so-called "Never Trump conservatives," voting for Trump in 2020. I have inevitably concluded at times that Trump would do something to push me away from him. He has not disappointed on that front, from tariffs to character issues. But now I do not see how anyone else can offer a more compelling alternative to the president. Each time the president does something I do not like, his opponents play a game of "hold my beer."

Trump may have criticized Kavanaugh's first accuser, Christine Blasey Ford, in a way I found inappropriate for a president to do, but his opponents have thrown out the millennia-old principle that a man is to be presumed innocent. The president may have enacted tariffs I find harmful to the economy, but his opponents are willfully destroying a good, innocent man so they can keep destroying children.

George W. Bush attempted to put Harriet Miers on the Supreme Court and pushed comprehensive immigration reform, No Child Left Behind, the General Motors Bailout, etc. I opposed all those, but never doubted President Bush's integrity, character or faith. Frankly, Trump does not have the character or strong Christian faith I prefer in a president. But he is positively angelic compared to his political opponents and the press. Between Trump and his opposition, I would rather vote for him, despite his flaws, than for his opponents who want a flawless progressive utopia. Trump is neither an ambassador for my values nor the articulate champion of my principles I would prefer. But he is a safe harbor in a progressive storm that seeks to both destroy my values and upend our constitutional republic.

Progressives believe Trump is an authoritarian tyrant barely constrained by the rule of law. With a straight face, these same progressives argue that the accusations against Kavanaugh are proof of his guilt, that he should not be presumed innocent, that a lack of witnesses is confirmation he did what they claim, that all women must be believed except the ones who defend Kavanaugh and that any dissent is just white male privilege. Progressives may claim Trump is Caesar at the edge of the Rubicon, but they have embraced the bastard love child of Joseph Stalin and Franz Kafka and enlisted the American political press to smear, defame and attack anyone who stands in their way.

The political press has behaved as co-conspirators with the Democrats in the Kavanaugh matter. They have clearly been fully co-opted. Reporters are planting their flags with the so-called Resistance and donning pink hats instead of defending truth and reporting facts.

There is much in the present political age about which I am uncertain. But there is one thing about which I am absolutely certain: President Trump is not my enemy, and too many progressives view me as theirs.