The Island of Misfit Toys Takes Over

Erick Erickson
|
Posted: Mar 09, 2018 12:01 AM
Share   Tweet
The opinions expressed by columnists are their own and do not necessarily represent the views of Townhall.com. 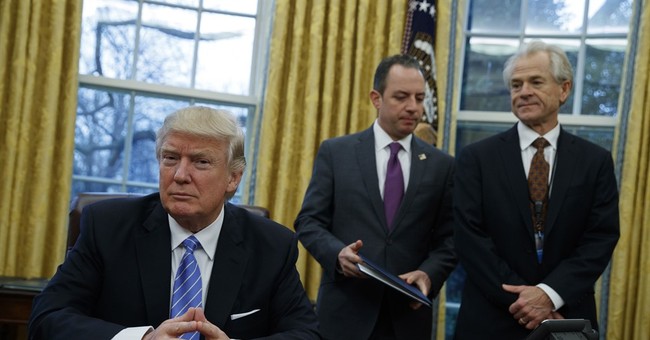 Peter Navarro is not a household name, but he should be for the damage he wants to do to the American economy. He is a left-wing academic from California. His economic ideas tend to be on the fringe and he has largely been rejected by both Democrats and Republicans. But Navarro, a man who supported Barack Obama banning the incandescent light bulb, has captured the imagination of one man: Donald Trump.

President Trump named Navarro his Director of the National Trade Council, a new organization within the White House with the purpose of advising the president in trade negotiations. Other White House staff members have largely blocked Navarro from the president over the past year. Many White House insiders have noted that Navarro had limited access to the president. But as the competent members of the Administration have left or been fired, Navarro has patiently waited them out.

Liberal and conservative economists have long ago acknowledged that tariffs lead to economic disaster. In 1930, President Herbert Hoover signed the Smoot-Hawley Tariff Act into law, raising tariffs on more than 20,000 imported goods. The effect was to exacerbate the conditions of and prolong the Great Depression. Liberal economists like Paul Krugman and conservative economists like Milton Friedman agreed that the tariffs did not trigger the Depression, but they also agree that the tariffs worsened the situation. Other countries started a trade war with the United States, and what could have been a quicker departure from depression became a prolonged quagmire.

Despite the history and uniformity of opinion, Navarro believes and has convinced the president that tariffs are a good idea. Thankfully, it appears saner minds prevailed and President Trump's initial foray into tariffs are symbolic. He has exempted Canada and Mexico, the former being the largest importer of steel into the United States. He has allowed other countries easy means by which to exempt themselves. But the overall push is still terrible policy.

The problem with President Trump's tariffs is that even imposing the tariffs will not make imported steel and aluminum as expensive as their American counterparts, just more expensive. On top of that, other countries are expected to respond by raising tariffs on American goods, just like in 1930. The only losers will be American consumers who will see increased prices for everything from a six-pack of beer to a car. The rest of the world will continue to trade with each other in harmony, unencumbered by the American tariffs.

Personnel is policy and President Trump claims he only hires the best. Increasingly, though, we are seeing the President's instincts are to surround himself with people who make him feel superior. "A" leaders tend to surround themselves with other "A's." But "C" leaders will fill their ranks with sycophants and cronies who make the leader feel smarter and better than he is. President Trump is surrounding himself with caricatures of smart men instead of surrounding himself with actual smart men. The president has had "A" caliber men and women around him, but they were put there on the advice of other people. But many of them are moving on, including Gary Cohn, the White House economic adviser who, just two weeks ago, was floated as being a replacement for White House Chief of Staff John Kelly.

With the smart and competent leaving, the president is left with his island of misfit toys. The men and women who have been at the outer edges of power and academia are moving into the close gravitational orbit of power. Others had wisely kept them to the outside, but those others are gone. Now we will see fringe policy become mainstream with potentially disastrous consequences.

To be fair, though, all of this is possible because of the mass hysteria of the establishment against President Trump. They proclaimed the sky would fall by moving the American Embassy into Israel, withdrawing from the Paris Accord and refusing to negotiate with North Korea. The sky never fell with the President abandoning the establishments' preferred policies. So now he'll abandon 100 years of sound trade policy. God help us all.