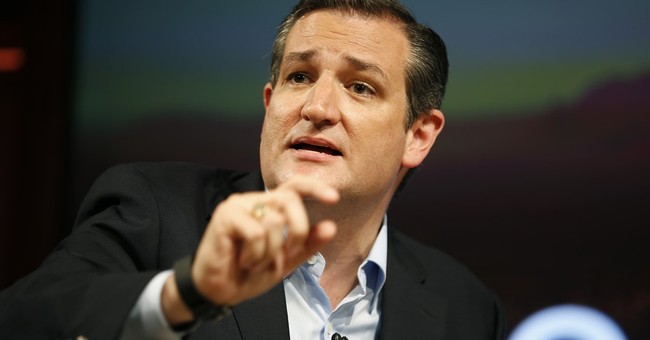 Ted Cruz should have an uphill battle for the Republican nomination. Many of the leading pundits, personalities, and legislative leaders identified with the right do not like Ted Cruz. They think Cruz rocks the boat, picks too many fights, is more show horse than workhorse, and is not likable.

Luckily for Ted Cruz, the base of the Republican Party has as much disdain for those pundits, personalities, and legislative leaders as those pundits, personalities, and leaders have for Cruz. The feeling is very mutual. As the thinkers and elites of the GOP pile on Ted Cruz, more and more conservatives rally to Cruz. Right now, a Cruz Super PAC is running ads in support of Cruz that use an unflattering quote by John Boehner as an endorsement of Cruz. It will help Cruz.

The latest attack against Ted Cruz comes after last Tuesday's CNN debate. Caught up in the weeds and minutiae of legislative politics on immigration, Cruz suggested he did not support legalizing illegal aliens, and Marco Rubio insisted Ted Cruz was a liar. The history of the dispute has a lot to do with moving goal posts over time.

When Marco Rubio ran for office in 2010, he made it clear he did not support amnesty and would not support the Bush era comprehensive immigration reform plan. Over time, Marco Rubio did reach across the aisle to work on immigration, and the plan to which he attached his name became known as the "Gang of Eight" plan.

Cruz says it was a poison pill -- an amendment that was designed to expose the lie about the Gang of Eight not being amnesty. It does seem rather obvious that if one were to offer a poison pill to expose a lie that the person doing so would not, at the time, label it a poison pill. In fact, at the time, Cruz said he was doing it to show he could be reasonable and compromise.

Cruz's amendment died and the Gang of Eight was exposed as fully intending to put illegal aliens on a pathway to citizenship. Likewise, Marco Rubio walked away from the Gang of Eight feeling betrayed by Democrats who really were not interested in a bipartisan plan, but just wanted to use Rubio.

The fallout now is bloodlust. Senate colleagues, pundits, and Republican elites have been livid with Ted Cruz ever since. Cruz helped scuttle an immigration deal every right thinking person in Washington insisted was a good deal. So now they want everyone to know that Ted Cruz supported legalization of illegal aliens.

Typically when this happens, Republican elites demand we understand context, procedure or backstory. Not so with Ted Cruz now. They want to finish him off, and hope everyone will ignore the backstory, the procedure and the context. Yes, Ted Cruz offered a proposal, the result of which would have allowed some illegal aliens to stay in the United States in exchange for never becoming citizens. His plan failed and exposed just how intent his fellow Republican Senators were in giving illegal aliens a pathway to citizenship. Now those Senators and Republican elites want revenge.