Too Soon to Go Full Totalitarian 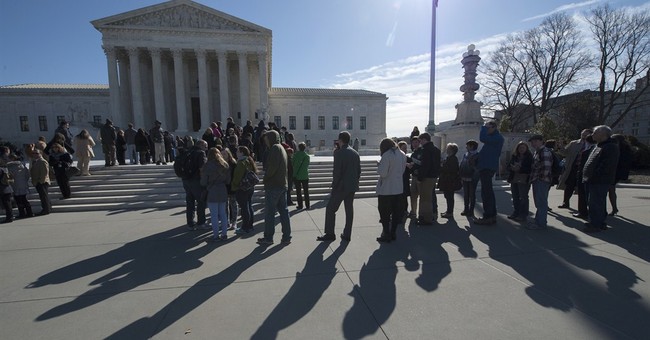 The gay rights movement has tended to be a well-choreographed stage production over the last number of decades. Over time, behind the scenes, they pushed hard for gay characters in film and television. They pushed gay actors out of the closet and encouraged celebrations of diversity.

A population that, according to the census, makes up less than 10 percent of the nation, gives the impression that it represents at least a quarter of the population. Many Americans are surprised by how few gay Americans there actually are. To its credit, the gay rights movement has worked hard to shift culture and opinion. The growth of acceptance of gay marriage is one of those areas.

With the Supreme Court set to mandate gay marriage nationally this summer, it might have been wise for such a well-orchestrated campaign to coast. Let the sentiment continue to grow. But a movement hostile to tradition and religion could not stop there. As I write regularly, you will be made to care about the issue, and the gay rights movement is rushing things sooner than they probably should.

The federal government enacted the Religious Freedom Restoration Action in the mid-nineties, and now 21 states have similar laws. But in the past two weeks, gay rights activists and their allies in corporate America signaled that protecting religion has come to an end. While they do not think a gay baker should have to bake a cake for a bigoted Christian, they are insistent that Christian bakers bake cakes for gay weddings or be driven from business.

Anthony Kennedy, America's black-robed master on the Supreme Court who decides every case based on what will enhance his power to referee the decisions of Americans, is set to impose gay marriage. It will be his Brown vs. Board of Education. But Kennedy, for all his faults, is a civil libertarian at heart.

Kennedy's notions of jurisprudence tend to play out with a "live and let live" attitude. Suddenly, on the verge of total victory, gay rights activists are letting their inner totalitarian out too soon. In Indiana, a local pizza restaurant owner dared tell a reporter that her business would gladly make pizzas for anyone, including gay customers. But the owner answered truthfully that she was a Christian and did not want to cater a gay wedding. Mind you, she had never been asked, but merely saying it was enough to generate death threats and calls to burn the restaurant to the ground.

In the New York Times, liberal columnist Frank Bruni insists that Christians must be "made" to change their church doctrines on sexual immorality, doctrines that are 2,000 years old. Bruni actually quoted a gay rights advocate that "church leaders must be made to take homosexuality off their sin list." Bruni called this "worthy" and "warranted."

Archbishop Chaput of Philadelphia, in 2012, wrote to his congregation on abortion. He told them, "Evil talks about tolerance only when it's weak. When it gains the upper hand, its vanity always requires the destruction of the good and the innocent, because the example of good and innocent lives is an ongoing witness against it. So it always has been. So it always will be. And America has no special immunity to becoming an enemy of its own founding beliefs about human freedom, human dignity, the limited power of the state and the sovereignty of God."

Americans can disagree on gay marriage. The Supreme Court declaring it legal and imposing it on states that voted to prohibit it will not, like with abortion, change church doctrines that have existed for 2,000 years. The faithful will not suddenly redact First Corinthians or Matthew 15:19 from the Bible.

In a nation that has prided itself on individuality and free conscience, it seems we should allow the mom-and-pop shop of committed Christians to opt out of gay weddings. But, even before Anthony Kennedy rules, we are seeing that will not happen. The gay rights movement, a part of the left, is showing its totalitarian nature.