Erich Reimer
|
Posted: Sep 10, 2018 12:01 AM
Share   Tweet
The opinions expressed by columnists are their own and do not necessarily represent the views of Townhall.com. 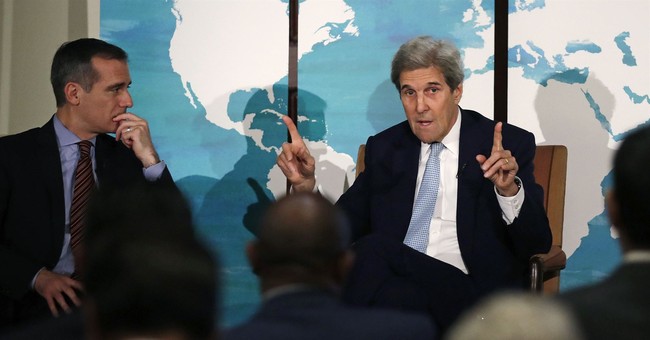 At least partly in this case.

On Sunday inan interview with CNNFormer Democratic Presidential Nominee, as well as having previously served as Secretary of State and Senator, John Kerry described how the recent decades of witch-hunts and investigations against Presidents in bids to incapacitate them for purely partisan purposes is destructive to our republican norms and constitutional order.

“You had the Whitewater probe, this interminable investigation, which was legitimate perhaps in its beginning, initial effort…but went way beyond that, and on and on and on…but more than that, you had a concerted effort to destroy a presidency. And that now seems to have become the norm. New president comes in? We're going to destroy him. We're not going to see how we can work together."

Though in the interview Kerry would then go on to decry President Trump, on this broader point Kerry speaks to an essential truth we have seen firsthand over the past 1.5 years of the Trump Administration as well as for several past Presidents in recent years.

It seems that all too often nowadays, when it comes to the Presidency, when the real and actual election is over it nonetheless still continues in the minds of some. When President Trump won on November 8, 2016 immediately just days later the “Not My President” movementsprouted up asmany outright refused to accept the legitimacy of President Trump’s election or ascension to office in a shocking affront to our Constitution and governmental norms.

As much as then-candidate Trump was roundly denouncedby the mainstream media and the leftfor his seeming back-and-forth in accepting the 2016 election results as legitimate if he lost, it appears many on the left now are still litigating an election that was settled long ago. Many of these folks had made up their minds to delegitimize and try to degrade our President’s public approval and policymaking ability – horridly unsuccessfully, I might add, as our President has seen extraordinary support and governance success – from the moment they saw he would become our 45thPresident.

Yet the treatment of President Trump is in some ways similar to how opposing sides treated President Obama and Bush, as well as President Clinton beginning midway through his presidency, in some ways too and seems a deeper symptom on our recent norms.The origin may have been in the circus of the Clinton impeachment investigation and proceedings followed by the Supreme Court actually deciding the 2000 election due to Florida voter disputes, suddenly lending credence to the idea that a President’s election was not as set in stone as it seemed.

Most elected officials in their victory speeches speak to how they hope to unite the community, district, state, or nation after a partisan election and seek to govern for all their constituents. Though nowadays it often sounds more like a whimsical hope and boilerplate political speechwriting than a serious and achievable plan, there undoubtedly was a time when after elections our citizenry really did come together, at least to a degree and as evidenced byapproval ratings in the earlymonths of administrations.

One thing that flummoxes many Trump voters and supporters and that undoubtedly would further the bad blood currently hyperpolarizing our nation right now is the knowledge that many of those currently opposed to President Trump and calling for his impeachment or even imprisonment never gave him a chance. If they did, how could they be so fanatically opposed to historic economic growth, optimism, military strength, judicial fidelity, and so much more?

When the idea that simply because you don’t like the election results that the person elected is considered illegitimate, that is not only extraordinarily destructive to serious governance and policymaking but also strikes at the deeper infrastructure of our constitutional republic. It harkens back to a day, and still the case in some destabilized countries in the world, where elections would often be followed by civil strife as opposing sides try to achieve with force of arms what they could not at the ballot box.

Though that seems a far ways away, it is well on the path that begins with delegitimizing our elected officials and thinking that the election still continues when it ended long ago. Does that mean we can’t disagree and fight in the policy processes, particularly when the elected official is one we have fierce disagreements with? Of course not, as that is the beauty of democracy.

But the passions of the election season have their place and once there was a time when they cooled and subsided into the cool and calculating mechanics of republican governance. The outrageous delegitimization of President Trump is horrendous and dangerous in the long-term, but it is worth recognizing it is but the current shameful maturation of a process that began years ago.