Where are the Leaders? Everywhere.

Eric Cervone
|
Posted: Jun 25, 2020 12:01 AM
Share   Tweet
The opinions expressed by columnists are their own and do not necessarily represent the views of Townhall.com. 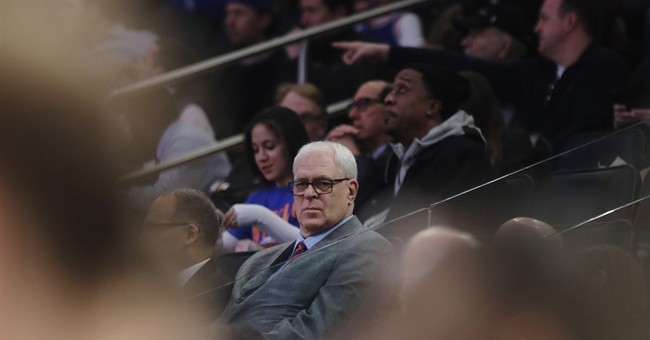 One of the few cultural high points of 2020 has been The Last Dance, ESPN’s documentary on the 1990s Chicago Bulls. (And thank God The Last Dance came along when it did. Before that, all we had was Tiger King. I’m still not sure how a serial animal abuser became a national icon, but I digress.) The Last Dance offered a much-needed dose of positive energy to a weary country. Not only did it introduce an entire new generation of young men to 1990s-era Carmen Electra, but—almost as importantly—we were able to see the legendary leadership of coach Phil Jackson up close. While Phil Jackson is often credited for being a motivational genius, his leadership qualities can be found everywhere.

Over the past several months, countless outlets have all been asking the same question: “Where are the leaders?” By “leaders,” they usually mean politicians and the president, in particular. This question is ridiculous on its face. It’s been years since Americans truly trusted the leadership of our politicians. Since 2007, Congress has barely cracked a 25 percent approval rating. And post-World War II, only two presidents have averaged an approval rating above 60 percent. Americans inherently know that true leadership does not come from elected officials. Unlike other countries run by dictators and despots, we’ve never looked for answers from the top.

It’s a common phrase that the American president is the “leader of the free world.” But America’s founders had to be dragged kicking and screaming into even having a president at all. Under the Articles of Confederation, which served as our first constitution and lasted for eight years before being replaced by the Constitution in 1789, America had no chief executive at all. When the Constitution did eventually create the office of the presidency, the founders went to great lengths to try to limit the president’s power.

Did this mean that America had no leadership? Of course not. But after fighting off a tyrannical dictator, the earliest Americans knew that leadership had to come not from any one particular office, but from the actions of many. It couldn’t just be assumed that those in power were the best leaders. George Washington, while addressing military officers in Virginia, told the officers, "I shall make it the most agreeable part of my duty to study merit, and reward the brave and deserving.” Washington knew that the title of “officer” did not automatically confer leadership ability upon his men. Washington had to work to find leaders, even among his top ranks.

There have been hundreds of NBA head coaches, but few have earned the reputation that Phil Jackson enjoys. Jackson’s unique leadership was on display in perhaps my favorite scene from The Last Dance. The Bulls had just signed Dennis Rodman, who was known throughout the sport for being a difficult personality. At the time, Jackson had already won three championships with the Bulls. It’s easy to imagine what most coaches might do in this situation—they’d read Rodman the riot act. Jackson was a successful coach of one of the most talented teams ever assembled; he could have told Rodman to simply fall in line. But this approach likely would have driven a wedge between Rodman and Jackson. Instead, Jackson met with Rodman and acknowledged the value of Rodman’s peculiar temperament. The legendarily erudite Jackson compared Rodman to a heyoka—the sacred clown of the Lakota people. Jackson told Rodman that the heyoka plays a vital role within the tribe; as a contrarian unconstrained by normal societal bounds, he could freely critique the tribe’s customs, rules, and behaviors. (I shudder to think about the cries of cultural appropriation Jackson might have received if he had made such a reference today.) Jackson believed this was what the Bulls needed: someone who could see things differently.

Rodman immediately responded to Jackson’s approach—it was as if, for the first time in his career, someone had actually understood what he could contribute. The Bulls went on to win three more championships, with Rodman playing a vital role. Phil Jackson wasn’t a visionary who foresaw Rodman’s success. He simply spent enough time with his players that he knew a force like Rodman, if properly utilized, could be the Bull’s missing piece.

Real leadership rarely comes from the highest authority. Real leadership needs to come from within our communities, not from strangers who might be thousands of miles away. Rapper Killer Mike has referred to current political debates as “free people arguing over who got the best master.” Fighting over whether one politician is the better choice to “lead the country” than another misses the mark entirely. No one person can be the leader, from whom all wisdom flows. NBA commissioner David Stern could not have helped Dennis Rodman reach his potential. Stern’s relationship with Rodman was superficial at best. It took Jackson, someone who spent time getting to know Rodman personally, to understand how best to channel Rodman’s energy.

If you have a business, a family—hell, even if you’re just the assistant captain of your softball beer league—you’re in a position to be a leader. Retired Navy SEAL Lieutenant Commander Jocko Willink refers to this idea as “leading up and down the chain of command.” You don’t have to be a senior executive or the president in order to be a leader. In fact, many people in those positions are not leaders at all. It’s up to every individual to determine whether he or she will be a leader.

There’s a lot of pessimism going around today, but I’m optimistic about one thing: America has plenty of leaders. We just have to look in the right places.