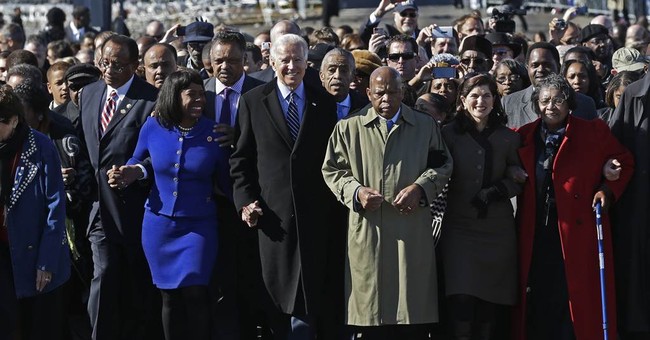 Last weekend marked the 50th anniversary since Dr. Martin Luther King, Jr. led the march from Selma to Birmingham, a "bloody Sunday" in which police officers attempting to stop the march launched tear gas and brutalized dozens. President Obama traveled to Selma to mark the historic moment by leading a memorial march across the Edmund Pettus bridge. The address he gave has been warmly received. Many were heartened to see the President more publicly embracing his role as America's first black president. Others, like The Atlantic's James Fallows, praised the President for offering an inspiring articulation of the American dream.

Republicans are getting a lot of heat for their conspicuous absence from the event. At best, it's being ridiculed as a terrible political gaffe; at worse, reviled as a symptom of the "dark vein" of intolerance that still persists in the Grand Old Party. Doubtless these theories hold some truth. There are certainly plenty of tone deaf, foolhardy politicians out there, and unfortunately bigotry and racism will always be with us. But I would suggest that there is another important factor at play, which is that the issue of race in America has been hijacked by the Progressive Left to such a poisonous extent that authentic dialog has become virtually impossible. And despite his unique and historic opportunity to do otherwise, President Obama has done nothing to improve the situation; in fact he's made it worse.

It may seem like ancient history at this point, but President Obama's habit of inflaming racial tensions and fostering division on this issue goes back to the very beginning of his presidency. Some may recall his actions following the arrest of Harvard Professor Henry Louis Gates. Without knowing the full details of the event, he said that the police acted "stupidly" and implied that race was a motivating factor in Gates' arrest for disorderly conduct. What then followed was the now infamous and awkward "Beer Summit," in which the President attempted to transmogrify a routine law enforcement episode into a lesson on racial sensitivity. This kind of ideologically-loaded approach to race coupled with his lack of charity towards law enforcement officials would only be the first of many by his administration. And the message sent to the American people, to borrow a phrase from the President himself, was crystal clear: If you don't adhere to the Progressive narrative on race in America then you have no place in the discussion. In other words, you are either with us, or you are against us.

Attorney General Eric Holder quickly followed the President's lead on this issue, using his first official speech after taking office to chastise the nation for being "cowards" on the issue of race. With this statement, the top law enforcement official in the land sent a message similar to that of the President: on matters of race, the Obama administration would be guided not by the law, nor by a spirit of charity or objectivity, but by an ideology that views every incident involving African Americans as a de facto case of racial persecution.

The Trayvon Martin case was the next instance in which the President fanned the flames of racial tension without knowing the full story. After the verdict was issued exonerating George Zimmerman, President Obama made a statement containing the following remarks:

"You know, when Trayvon Martin was first shot I said that this could have been my son. Another way of saying that is Trayvon Martin could have been me 35 years ago. And when you think about why, in the African American community at least, there’s a lot of pain around what happened here, I think it’s important to recognize that the African American community is looking at this issue through a set of experiences and a history that doesn’t go away.

There is nothing inherently provocative about the above words, or the rest of the President's address on this matter. It was, in fact, a very nice speech in which he spoke about his desire to empower young black men who are currently suffering from a shortage of positive examples in their lives. However, the troubling thing is that the President used the Trayvon Martin case to advance an extremely divisive narrative. Despite the verdict, the President perpetuated the idea that Trayvon Martin was a victim of racism, that George Zimmerman would never have followed him through the neighborhood that night if he'd been a white boy. This is irresponsible because President Obama has no way of knowing what would have happened if Martin had been white. He has no idea what actually transpired between Martin and Zimmerman, and his speculations on the matter were not helpful. Not to be deterred, the Department of Justice launched an investigation into the case with the hopes of securing a federal civil rights prosecution against George Zimmerman. The investigation ultimately proved fruitless and no federal charges were levied against the defendant, but the damage had already been done. Trayvon Martin's death is perceived by the black community as proof positive that racism still pervades American culture and society, his hoodie a symbol of solidarity in the face of institutionalized aggression.

Fast forward to August 2014 and the fatal shooting of Michael Brown. Yet again, the President inserted himself into what was already an extremely tense situation. Speaking before the Congressional Black Caucus, the President said the following:

"And we have to close the justice gap – how justice is applied, but also how it is perceived, how it is experienced. Eric Holder understands this. That's what we saw in Ferguson this summer, when Michael Brown was killed and a community was divided. We know that the unrest continues. And Eric spent some time with the residents and police of Ferguson, and the Department of Justice has indicated that its civil rights investigation is ongoing.

Now, I won't comment on the investigation. I know that Michael's family is here tonight. I know that nothing any of us can say can ease the grief of losing a child so soon. But the anger and the emotion that followed his death awakened our nation once again to the reality that people in this room have long understood, which is, in too many communities around the country, a gulf of mistrust exists between local residents and law enforcement.

Too many young men of color feel targeted by law enforcement, guilty of walking while black, or driving while black, judged by stereotypes that fuel fear and resentment and hopelessness."

Again, the presumption at play here is remarkable. The President used the Michael Brown case as an example of injustice against African Americans when the investigation wasn't even completed. He had no idea what happened between Michael Brown and Officer Wilson. He couldn't know for a fact that the "hands up, don't shoot" meme was accurate (it, in fact, proved not to be, as his own Justice Department's investigation discovered). He didn't know anything about the character of Michael Brown other than how the young man was presented to him by others. What he did know is that the young man, only minutes before his death, had committed robbery and assault; and yet Michael Brown was lionized as a martyr, held up as a symbol of institutionalized racism and discrimination. The facts of the case were irrelevant. All that mattered was the narrative.

Back to Bloody Sunday. Thanks in large part to the President (and those emboldened by his wholesale embrace of the Progressive race narrative), the 50th anniversary of this watershed moment in American history got twisted up and conflated with the Ferguson narrative. This shouldn't have happened. Michael Brown didn't die at the hands of a white police officer while peacefully marching for his civil rights. To imply such is to slander the memory of Dr. King and every young African American man and woman who persevered in the face of hatred and persecution, many of them paying the ultimate price. The conflation of Ferguson with Selma also serves to alienate many people who reject the notion that there is any connection between the two situations, i.e. many Republicans. This stifles discussion, foments division, and ultimately feeds into the Progressive narrative that conservatives don't care about black people.

Of course, everything I've just written can be easily written off by Progressives as merely another thinly-veiled racist diatribe. This isn't, ironically, due to the color of my skin, but more due to the orientation of my political beliefs. Conservatives cannot speak on these matters and be taken seriously. Progressives won't allow it. All their talk about the need for "dialog" is hollow, for dialog implies an exchange of ideas, opinions, and perspectives – none of which are welcome when coming from the conservative end of the political spectrum.

I am encouraged that the President takes such an interest in the welfare of young black men in America. Heaven knows they need an advocate. They need someone that they admire and respect to tell them that they matter, that their choices matter, and that they have the power to make a good life for themselves – to choose a path of success and stability despite the many challenges they face. What young men of color don't need is someone exploiting them for political gain, which is exactly what politicians do when they choose to fan flames of tension rather than speak hard truths about the problems that exist on both sides of this issue.

Martin Luther King, Jr. said, "Our lives begin to end the day we become silent about things that matter." Few would deny that our society is a long way from perfect on matters of race. Racism still exists, and our civil institutions aren't immune from the influence of this racism. The President is correct in addressing this problem, and leaders at the state and local levels should follow his lead. But the black community will never achieve the dreams articulated by Dr. King so long as its leaders focus exclusively on the problem of white racism while ignoring other critical things that matter for their people.

In a certain way, racism has been allowed to become a red herring; a servant of an ideological narrative that places the white race in the position of villain and the black race in that of victim. The resulting myopia has meant that very real problems within the black community are left to fester unaddressed. President Obama knows that the breakdown of the black family is at the top of the list. Here's hoping he dedicates more time to discussing this issue and leaves the ideological pandering to Al Sharpton and his ilk.