With Roosevelt on Labor Day

Emmett Tyrrell
|
Posted: Sep 07, 2017 12:01 AM
Share   Tweet
The opinions expressed by columnists are their own and do not necessarily represent the views of Townhall.com. 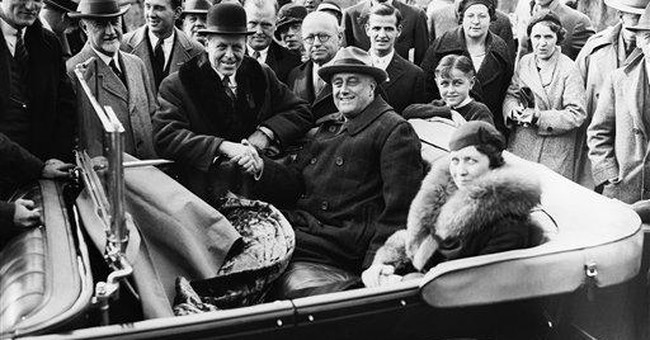 WASHINGTON -- Labor Day weekend passed with soggy weather in Washington. It was not as soggy as in other parts of the United States, but it kept me indoors most of the time, so I decided to give some thought to the one American president who I associate with Labor Day, Franklin Delano Roosevelt. To be historically correct, I should associate President Grover Cleveland -- a conservative Democrat -- with Labor Day, for he was the first to make it a national holiday. For some reason, it is associated with FDR -- at least in my mind.

This is possibly because FDR gave a rousing Labor Day speech, or because he identified with the labor union movement. At any rate, this soggy Labor Day weekend, I reflected on Roosevelt. I have folded him into American history with other great presidents: George Washington, Abraham Lincoln and, of course, Ronald Reagan. The conservative that I am, I rather like the 32nd president despite his many nonconservative policies. Most importantly, he won World War II for us. I cannot envision any Republican of the era competent enough to have won World War II. Roosevelt helped make American history a happy story. Conrad Black's biography of him is what finally convinced me, and Black is a solid conservative.

Today, the frenzied left is smashing monuments and rewriting our history as a very sad tale of epochal iniquity, but it is full of ideologues and plainly ignorant. The story of America is a great tale full of achievement -- the civilizing of a continent, the victories in world wars and lesser wars; of innovation -- the mass production of goods and, more recently, the digital revolution; the excogitation and implementation of human rights, rights that were never thought of on whole continents and in thousands of governments that came before our government.

American history is a history of success, and Roosevelt contributed to that success story mightily. He beat the Nazis, the fascists, and the Japanese warlords. Can you imagine him being brought to life today and told that neo-Nazis are marching in the streets of America? Neo-Nazis saluting Hitler! The thing is quite impossible to envision. FDR would have these ignoramuses jailed -- at a minimum -- for disturbing the peace. Then, he would figure out some stratagem to keep them jailed.

FDR and many of his Brain Trusters died relatively young. Think of Missy LeHand and Harry Hopkins. They all worked very hard and played hard. The president died at the age of 63, after years of confinement in a wheel chair or on painful braces. He never wanted the public to see how polio had wasted his legs. One of the indignities modern trendiness has imposed on his memory is showing him in his crippled condition. He had overcome that condition and was proud of his achievement. He had a right to that pride.

Of course, he radically changed Americans' perception of government. Before Roosevelt, the political scientist James Q. Wilson tells us, politicians in Washington thought there were many things that government just could not do. The government was limited by our Constitution. After the New Deal, there were very few things politicians in Washington thought they could not do. Thus, today, they undertake all manner of legislation intent on doing good. It falls to us conservatives to prove to the average American that government's great projects are, for the most part, failures and a waste of money.

There are amusing aspects of Roosevelt's life, too. In his day, the White House was renowned for its dreadful kitchen. As Black describes in his biography of Roosevelt, the night after the attack on Pearl Harbor, journalists Edward R. Murrow and his wife were visiting the White House, and the president insisted they stay for dinner. What was on the menu? One of his wife's favorite treats: meatloaf. Can you imagine what wine was served? You can be sure that before dinner, the president regaled the Murrows with his specialty: a martini. They were legendary. They involved a lot of gin and a lot of vermouth. He made them himself.

Now it is time for a little name-dropping. In his retirement, President Richard Nixon relished salon-like gatherings, and it occasionally fell to me to invite his guests. When he lived in Saddle River, New Jersey, Nixon once asked me to bring a gang of writers out, among them the playboy Taki Theodoracopulos. Taki naturally ordered a martini. The president smiled. He would personally make the martini, he said. He did, and Taki and I both imbibed. It was delicious. I have always wondered whether President Roosevelt could match President Nixon as a bartender.