Donald Trump: Save the Eisenhower Memorial

Emmett Tyrrell
|
Posted: Apr 20, 2017 12:01 AM
Share   Tweet
The opinions expressed by columnists are their own and do not necessarily represent the views of Townhall.com. 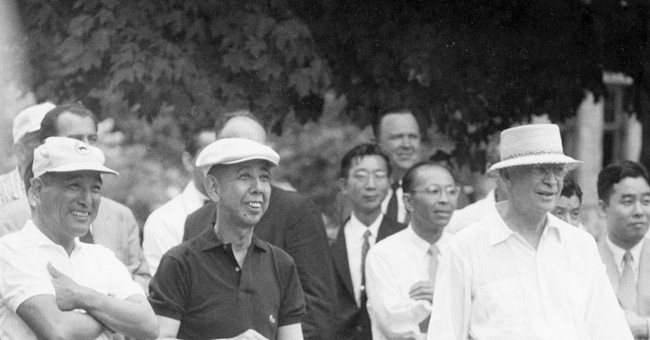 Trending
WASHINGTON -- There is hope! I am speaking of the envisioned memorial of Dwight D. Eisenhower here in Washington, D.C. Admittedly, its design by the crank architect, Frank Gehry, has been pretty much accepted by the memorial commission, and the chairman of the House committee that has control of the funding, Ken Calvert, seems to be going along. What's more, the Congressionally approved waiver calling for the memorial to have all of its funding in place before groundbreaking has been approved. So work on the memorial could begin as early as September.

Yet there is hope. Donald Trump is president, and he has called for deep and meaningful cuts in domestic spending. Why not start with Gehry's plaything? Then a serious architect could get going on a memorial of one of the men who assured the Allies of victory over the Nazis and the Japanese warlords. Ike was, we are discovering, also a very good president.

President Trump can achieve all this while making it clear that small economies in the budget set the stage for the larger economies that are bound to come. At some point, the politicians are going to have to address our disastrous economic condition, and with Gehry's monstrosity we have a welcome target. It is a wasteful expense and an offense to all those Americans who have had enough of the cultural elites' tastes imposed on them. "We hope very much that someone in the Trump administration will pay attention," Sam Roche, a spokesman for the Right by Ike organization, told Roll Call magazine. Right by Ike is an organization critical of Gehry's work. Roche went on to say, "This is emblematic of the swamp that the new president says he is here to drain." Give that man a Make America Great Again hat.

Let out a tweet, Mr. President, and send Steve Bannon up to Capitol Hill to shore up your base with the common Americans. Incidentally, do you suppose the White House knows that artnet News reported that Gehry wants to remove himself to France because of Donald Trump's election? Yes, Gehry was pictured in artnet News wearing an ill-fitting suit coat and baggy blue jeans complaining about the president's victory and whining that critics still do not consider him an artist. Well, before you move to France, Mr. Gehry, go down to Brooks Brothers and get a decent suit and a collared shirt. Better yet, President Trump can send you the name of his tailor.

I first encountered Frank Gehry's work when I visited Bilbao, Spain, back in 2015. The Guggenheim Museum there has collected the most up-to-date modern art in a building designed by him. The museum is situated on the outskirts of Bilbao and looks from afar like nothing so much as a huge jetliner that has crashed into the city, or perhaps two jetliners. It even features clouds of smoke that rise from a water pool on a regular basis and are emblematic of nothing in particular. Gehry was simply at play. The building is covered mostly by titanium, a metal that shines even in the gloom of Bilbao to what purpose I still do not know. Why not aluminum?

For his Eisenhower memorial, he envisages transforming a 4-acre city block near the National Mall. He plans to litter it with meaningless junk. There appear to be colossal cement chunks, a vast woven metal tapestry and some statues of Ike from different phases in his life. He will possibly be depicted as Supreme Allied Commander, as the president who got America through the 1950s and as a golfer. Ike was often derided for his avidity for the links. That was before Bill Clinton and Barack Obama made golf the official presidential pastime. The metal tapestry envisioned for the Mall stands 60 feet tall and 385 feet long. Supposedly, it depicts the D-Day landing site as it appears today. What is the point? I could understand if there appeared nubile cuties in bikinis on the beach, but the thought did not occur to Gehry. He has something cosmic thing in mind. The memorial is really all about him.

Actually, there is nothing serious about Gehry, and certainly nothing patriotic or heroic. He is simply another self-absorbed modernist like Jeff Koons, another artist whose work appears in the Guggenheim in Bilbao. Why does he not invite Koons to populate the Eisenhower memorial with Koons' trademark gewgaws: inflatable dolls, pastel butterflies, metallic rabbits? And I think I saw one of his sculptures depicting plaster spinach -- or was it asparagus? Modern art no longer alarms museumgoers, which I guess is an advance. It is simply infantile, trivial and banal.

Surely, we do not want this architect in baggy jeans to create a memorial to one of the great Americans of the 20th century. President Trump, it is time to act.