The President Is Allowed to Change His Mind

Emmett Tyrrell
|
Posted: Apr 13, 2017 12:01 AM
Share   Tweet
The opinions expressed by columnists are their own and do not necessarily represent the views of Townhall.com. 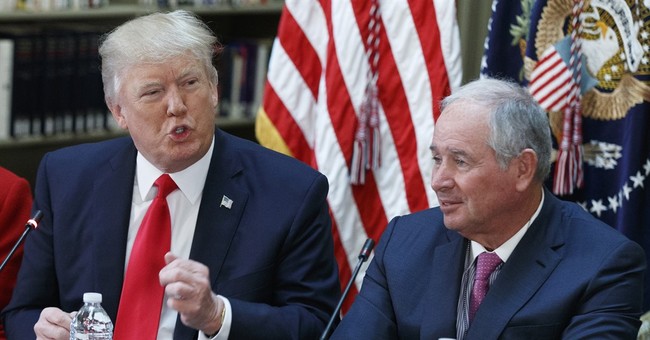 Trending
WASHINGTON -- It looks like former President Obama's national security adviser Susan Rice will get a reprieve. With all the hullabaloo from President Donald Trump's military action last week in Syria's ... do we call it Syria's civil war or a massacre? ... it now appears that Rice's mishandling of surveillance is going to subside from the headlines temporarily. Well, her mishandling of surveillance on the Trump team can wait. What President Trump did last week in public was historic: He changed his mind.

How many presidents change their minds in public? Moreover, how many have changed their minds for the good? Until last week, neocons were snickering at the president because of his irenic statements about using force in foreign policy. They called him an isolationist. Voices on the left heard his boasts about our unsurpassed military power and feared he was a hawk. What he showed late last week when he ordered a cruise missile attack on the military facilities of the Syrian butcher, Bashar Assad, was that he was a non-ideologue in action. When circumstances change, Trump will change. What he demonstrated last week is that he is not afraid to act.

Unlike former President Barack Obama, he does not draw lines in the sand and then forget about them when he has been caught up in his own bluster. Tyrants who make threats against the United States ought to remember the pictures of before and after the U.S. attack on Assad's air force. Possibly, the smoking hulks lying in their gutted bunkers were the same attack jets that had dropped canisters of sarin gas on the defenseless citizens of Khan Shaykhun just days before.

The language President Trump used to explain his change of mind was quite eloquent. He said: "Assad choked out the lives of helpless men, women, and children. It was a slow and brutal death for so many. ... No child of God should ever suffer such horror." Yes, he said "no child of God." The never Trumpians should think of these words the next time they start jabbering about our playboy president.

Yes, President Trump changed his mind. It should surprise no one who has been scrutinizing him the last couple or years. He is an America First, as they say. He likes beer and baseball and all kinds of competition. Check that first item -- he does not drink. He has, however, competed in sports, business and the entertainment industry. He likes to win, but has had his share of losses. A year or so ago, after a life of highly successful business deals, he entered politics and brought with him a fresh approach to the great game of politics. As for his political values, he has demonstrated them in the Cabinet he chose and the initiatives he has pushed in his first days in office. His choice of Judge Neil Gorsuch, who now sits on the Supreme Court where the great Judge Antonin Scalia once sat, demonstrates that he is pretty much a conservative.

For almost 50 years, a counterculture has been growing and spreading across the country. One hears little about it from official Washington and the mainstream media, but the conservative counterculture has been taking root across America. We see it in state government and local school boards and local government. Now we are seeing manifestations of it in the Trump administration. I saw one such manifestation over the weekend in a huge piece about one of chief White House strategist Steve Bannon's favorite writers, Neil Howe.

Howe has been writing for some 40 years. He began his career as an early managing editor of The American Spectator. In 1987, he wrote a featured piece in the Spectator's 20th-anniversary issue, in which he outlined thoughts that he would eventually refine for the book Bannon admires, "The Fourth Turning," published in 1997. In Howe's 1987 magazine piece, he wrote, "Twenty years from now we may be so burdened by demographic and economic liabilities that visions of a better future will seem practically unattainable without onerous and long-term sacrifices in both our public and private lives." In his 1997 book, he wrote of generational cycles that America has experienced since the American Revolution. We now have entered a cycle of crisis, he writes, that will not end until 2025. Given how prescient Howe was when he laid down his 1987 thoughts, I think it would be wise to take him seriously now.

Bannon has, and I would think the President has, too. We have a population alert to the problems we face. It is the conservative counterculture around the country. Last week's military action suggests conservatism can be effective without being ideological.