Hillary, Donald and the Birther Demise

Emmett Tyrrell
|
Posted: Sep 22, 2016 12:01 AM
Share   Tweet
The opinions expressed by columnists are their own and do not necessarily represent the views of Townhall.com. 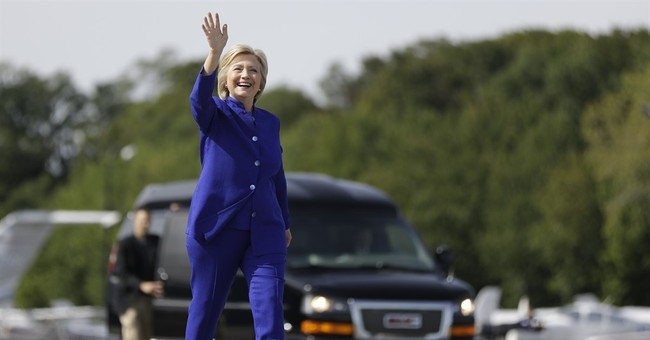 Trending
WASHINGTON -- Did you see the interview over the weekend of a listless and, apparently, exhausted Hillary Clinton? Supposedly she has recovered from last week's bout with pneumonia, but she could have fooled me. Call me a hypochondriac, but in my opinion her recovery is not going very well.

From the back of her airplane, Clinton droned on about "the bombings in New York and New Jersey," and then launched robotically into yet another attack on Donald Trump. This time, his transgression, according to Clinton, was to prematurely mention the bombing, though she had already introduced the subject. If she were aware of her faux pas -- or was it more serious like, say, a blackout? -- she gave no sign of it.

It was eerily suggestive of her kerfuffle over the birther controversy a day or two earlier. That involved more players. In fact, it involved the entire mainstream media, as they once again demonstrated the Taranto principle. According to this unfailing insight, the mainstream media only encourage left-wing politicians' worst impulses through their diapasonal approval of their lunkheaded behavior. Think of Michael Dukakis' presidential campaign appearance in a tank, wearing an ill-fitting helmet on his diminutive head. Or John Kerry's campaigning while windsurfing, and a half-dozen other he-man contraptions.

Well, before her ill-planned interview, she and the media fell for Trump's bait on the birther nonsense. He announced that he would make a statement on the birther matter on Friday at the opening of the Trump International Hotel in Washington, D.C. At the hotel, he kept the media waiting for 45 minutes while a string of decorated warriors mounted the stage to announce their endorsements of him to the whirring cameras. Finally, he came on and stated tersely and slyly: "President Barack Obama was born in the United States. Period." But he also said: "Hillary Clinton and her campaign of 2008 started the birther controversy. I finished it. I finished it."

The media had been had, but then Clinton was had, too. She appeared before a black audience to announce that "For five years, (Trump) has led the birther movement to delegitimize our first black president." She went on to say: "His campaign was founded on this outrageous lie. There is no erasing it in history." Unfortunately for Clinton, that is true. There is no erasing it in history. Shortly thereafter, her surrogates were on the campaign trail claiming that Trump was a liar and that Clinton's 2008 campaign was innocent.

At this point, let me explain why earlier in the column I called the birther controversy "nonsense." Back in 2008, or perhaps 2007, I put a reporter on the question of where Obama was born. A high-ranking Democrat -- yes, I said Democrat -- had informed me that there was truth to this birther question. It took my reporter about 48 hours to discover that there was not much to the legend. He checked the birth notices in Obama's hometown newspaper, and sure enough, little Barack was born in Honolulu, Hawaii, on Aug. 4, 1961. But he also came up with an explanation for the ensuing confusion. Obama's literary agent had claimed in the 1990s that Obama was born in Kenya. The agent later explained it as a clerical error. But with Obama and those hoping to make a buck on him, one never knows the nature of the Kenyan story. That was the beginning of the birther legend, and it, of course, spread.

As for 2008 Clinton, her fingerprints are all over the corpus delicti. She did not keep a private server in those days, but evidence that her campaign was active in promoting the birther legend exists even without emails. A volunteer who worked for her campaign in Iowa was fired when he was exposed for spreading the rumor; and there was word that Clinton's confidant, Sidney Blumenthal, was also engaged in spreading the rumor. Last week, a former editor at McClatchy Co.'s Washington Bureau came forward to say that Blumenthal had "told (him) in person" of Obama's Kenya origins. They met in his office in 2008, and the editor said that during the meeting, Blumenthal "strongly urged me to investigate the exact place of President Obama's birth, which he suggested was in Kenya." A reporter was dispatched to Kenya and came back convinced that the story was bogus.

In response to this story, Blumenthal emailed The Boston Globe saying: "This is false. Period." Obviously, the story is true. Blumenthal's mendacity is as widely known as Clinton's.