The Obama Economy and the Election

Emmett Tyrrell
|
Posted: Feb 13, 2016 12:01 AM
Share   Tweet
The opinions expressed by columnists are their own and do not necessarily represent the views of Townhall.com. 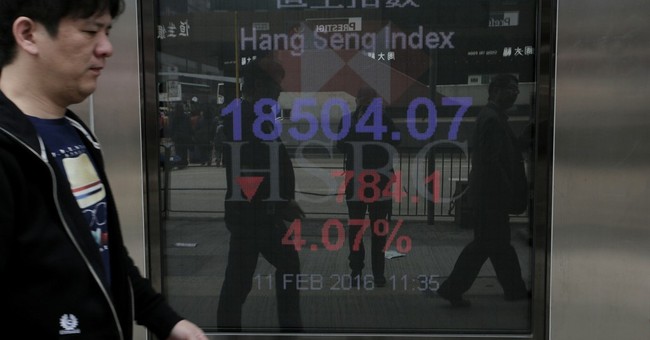 Well, well, the stock market has, of a sudden, caught up with the Obama economy. The spectacle is not pretty. In January, the market dropped like a stone. The Dow Jones Industrial Average lost 8.1 percent. Friday, the Nasdaq shed 3.25 percent points upon hearing the news that payroll additions grew by only 151,000 jobs. That was well behind the monthly average of 2015, another year of Obama recovery. That is to say, it was another year of meager growth. In the last quarter of 2015, the economy grew at less than 1 percent. If this is a recovery, it is coming very close to looking like a prolonged recession.

Yet out on the campaign trail the Democratic candidates (there are two) led by a self-proclaimed socialist, Bernie Sanders, and apparently a socialist wannabe, Hillary Clinton, are still promising to burden us with more crackpot plans and more extravagant spending unto Utopia. The federal debt has increased by almost $8 trillion since President Obama came into office and now stands at an untenable $19 trillion. Still, the campaigning Democrats are promising ever more health care, free college education (including presumably rape counseling and anger management courses), plus "equal pay" for "equal work," which means more government regulation for a problem that many economists (as opposed to sociologists and feminists) say is no problem at all.

Meanwhile, Clinton is simultaneously saying she is more progressive than Sanders and more electable because she is ... she is what? More likable? More honest? More trustworthy? More youthful and more feminine? Clinton's pitch makes no sense. She will not come out and say she is not as left-wing as Sanders because that would offend the growing left-wing of her party. So she is yelling that she is more left-wing than the socialist Bernie, while hoping that moderates stick with her -- though there are few moderates remaining in the party.

I shall say it again: This election is going to be a bloodbath for the Democrats.

In the meantime, the economy is faltering even as the Democratic candidates promise their fantasy policies that somehow are supposed to fetch a hard-pressed middle class. Productivity fell by 3 percent in the last quarter of 2015. Business confidence is wobbly. Investment is down, which means we almost certainly will continue with slow growth. Of course, there is an alternative. That is economic growth. All the Republican candidates promise increased growth through lower taxation, less government regulation and encouragement for free market economics.

This week, writing in The American Spectator, entrepreneur Bob Luddy explains precisely how lower taxation and less government regulation frees the economy to grow and to produce ever more products for people to live freer and more prosperous lives. He writes, "Economies grow based on new private investment and innovation," and he disinterred the economic theorist who first made these points back in the 19th century, Jean-Baptiste Say. Say "theorized that the growth of economies is not demand-driven, but growth is created by new and lower cost products." Luddy cites the arrival of the McDonald's hamburger chain that in 1955 revolutionized American dining habits and more recently the arrival of the iPhone, Google and Facebook, innovations that have created thousands of jobs, vastly increased prosperity and revolutionized the way Americans live.

In fact, these recent innovations have changed the way people live worldwide. Unless one happens to be living in Castro's Cuba or Kim Jong Un's North Korea. Those are two of the last countries on earth to experience what Sanders glowingly speaks of on the campaign trail, "revolution."

This is the free market's answer to the Democrats' record of slow growth or no growth. Yet is there a practitioner of supply economics running for president in the Republican race? Is there a candidate who has proved the validity of Say's theories? Well, all the candidates in the Republican race are arguing for supply economics, but one candidate actually has supplied products and opened markets to Americans across a wide range of activities. He is Donald Trump. Trump is the rare successful businessman who is also a successful politician, though a neophyte politician. He has staked out several successful political positions as a presidential candidate. He has offered a tax plan that is pretty much a supply-sider's dream. But he can also boast of his achievements marketing products. I hope he will. After all, it is what the economy needs right now. It needs growth.