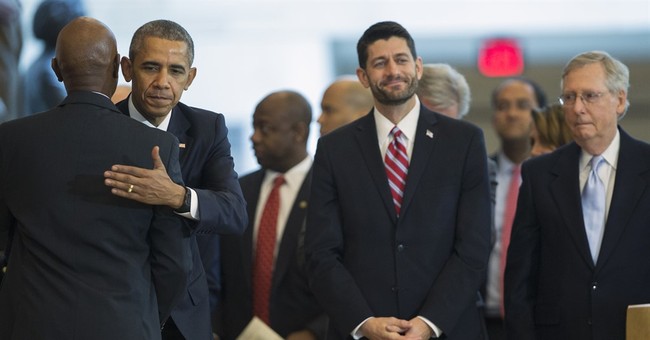 Last week, President Barack Obama, the 44th president of the United States and the only one who reportedly leaves no shadow, ventured forth to Paris to join 196 other national leaders on official business. Last month in the City of Light, 129 people were murdered and 352 wounded by crazed Islamofascists. Yet President Obama did not go to Paris to organize the world against Islamofascists, whose headquarters are just a B-52's flight to Syria and Iraq. He did not go to Paris to urge stricter gun control laws on the French, which is his usual response to gun violence. No, he journeyed to Paris with the aforementioned world leaders to devise ways that they might manage climate control.

Our Noble Prize-winning president declared this absurd world gathering a "turning point." It would be the "moment we finally determined we would save our planet." Though, alas, no plausible agreement for managing climate control is likely to be signed as President Obama's historic "moment." In fact, not one of the world leaders is likely to even suggest where they might set the world thermostat. In fact, there is no world thermostat. Paris was but another futile gesture made by our sonorous president who leaves no shadow.

Once he had made his "turning point" speech in Paris, the prophet Obama vamoosed for Washington and received word that in California 14 people had just been murdered and 21 injured in a massacre by two or three gunmen. The identities of the perpetrators were not even known when our president trotted out his favorite cure for gun violence. He attributed the murders to the lack of "common-sense gun safety laws." There are over 300 million guns in America, most of them constitutionally protected, and against this colossal figure he calls for "common-sense" laws?

As the evidence became clear that the perpetrators of this heinous act were Islamofascists, the president steadfastly refused to call them terrorists. His stubborn reluctance became a diverting sideshow in the days that followed. When would the president admit the obvious, and, by the way, why was he obfuscating the obvious? Was it part of some bizarre ritual known only to members of the White House staff? On Friday, the director of Obama's FBI identified the crime as an act of terrorism and he went on to say that the two Muslim killers -- down from the suspected three killers -- gave "indications of radicalization." Still, the White House refused to identify the killers as terrorists. In fact, our president only admitted to reality on Sunday during a stupendously defensive address to the American people. How many Americans watched the speech I cannot say, and it only lasted 15 minutes, but he finally uttered the word "terrorism." It had taken him three days to catch up with his FBI director.

Incidentally, on Sunday, though the president spoke from a well-lit room, standing behind a podium, still no one reported seeing his shadow. There never has been such an insignificant figure serving as president of the United States as Obama. He entered the White House seven years ago assuring us that the "war on terror" was a Bush administration exaggeration. He has undone President George W. Bush's victory in Iraq and responded to worldwide terror with years of blah. As recently as the day before Thanksgiving, he said there was "no specific and credible intelligence indicating a plot on the homeland." Meanwhile the Islamic terror has spread across Europe and to our shores. Once again, an official of the president's own government has refuted him. Last Tuesday, the chairman of the Joint Chiefs of Staff, Marine General Joseph Dunford, informed the House Armed Services Committee that ISIS has not been "contained," contrary to his boss, and that "strategically they [ISIS] have spread since 2010."

It is unusual for a man to have so little substance that he casts no shadow. I am told that the bizarre phenomenon is known in Hollywood, where an actor plays a comic figure one year and a villain the next. Possibly when Obama retires he will move to Hollywood and bask in the adulation of the stars. Surely, he will take his Nobel Prize with him. Do you recall what he won it for? I have forgotten.