The Politically Correct and Altercationists Anonymous 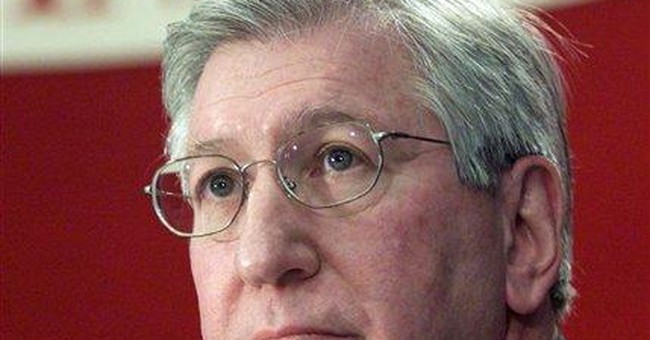 WASHINGTON -- I am rather sorry that Myles Brand has passed on to his reward. Brand is the fellow who, as president of Indiana University, gained enormous respect among liberals for ruining the basketball program of that basketball-loving university in that basketball-loving state. He fired basketball coach Bob Knight, one of the sport's greatest coaches, for a minor altercation that was an obvious setup. Knight had donated hundreds of thousands of dollars to the institution and overseen an athletic program that insisted on academic seriousness from its players, as well as competitiveness. Under Knight, IU won three NCAA championships and 11 conference championships. The basketball program has yet to recover, and I very much doubt that its players match the academic records of Knight's teams.

Admittedly, the hot-tempered Knight was controversial. He got into rows with coaches, journalists, players, referees, spectators -- actually, anyone who was available. Yet by the time Brand fired him, Knight had taken heed of those who admonished him to manage his temper better and was a much more irenic citizen. Call him a recovering altercationist. Perhaps Knight had enrolled in Altercationists Anonymous. His forced departure ignited angry student-body demonstrations, disrupting the university and causing Brand to seek police protection.

A couple of years later, Brand became president of the NCAA, where he created still more feuding. Under his leadership, the NCAA attempted to ban the use of American Indian names as school nicknames or mascots. The ensuing wrangling continues to this day. By edict of the NCAA Executive Committee, NCAA-sanctioned championships were not to be held on campuses whose mascots or nicknames derived from some aspect of American Indian heritage. Thus, William & Mary should not be known as the Indians and settled for the nickname the Tribe. Arkansas State should not be known as the Indians and changed its nickname to Red Wolves -- People for the Ethical Treatment of Animals be damned. The University of Illinois' logo until recently showed the stern countenance of an Indian chieftain in full headdress, representing its nickname, the Fighting Illini -- the Illini being a local Indian tribe. Somehow the university was allowed to keep the nickname, but it had to cashier the handsome logo for a large orange "I" that looks like an industrial caution sign.

Now American Indians in the great state of North Dakota have stood up for good sense and respect for their tradition. Since the NCAA's fussiness began, members of the Spirit Lake tribe of the Sioux Nation have resisted attempts at the University of North Dakota to expurgate its nickname, the Fighting Sioux. I wish the argumentative Brand were around to observe the spectacle and possibly to contemplate the nonsensical debate his meddling has caused, not only at the University of North Dakota but also at the aforementioned universities and at a dozen other colleges.

"When you hear them announce the name at the start of a hockey game (UND has an enthusiasm for hockey not unlike IU's for basketball), it gives you goose bumps," Frank Black Cloud -- not surprisingly, a Sioux -- told The New York Times. "They are putting us up on a pinnacle." Well, of course they are. Why would a university or, for that matter, a sports team adopt as a nickname or a mascot something that was not inspiring? The politically correct fussbudgets and various malcontents insist that these Indian remembrances are hostile references or somehow insulting to Indians. Actually, as anyone with any sense knows, they are acknowledgments of the tribes' dignity and original inhabitancy of the land. Extirpate their names and it is just another extirpation of their history. Doing so is what one might expect from Americans who hate the Indians, and there was a time when many Americans did. Adopting references to them is a way to honor them. Black Cloud is right.

There are many underappreciated motivations in history. As mentioned in this column some months ago, one is boredom. Certainly another is quarrelsomeness. Brand and many like him claim to high-mindedness, but au fond they are quarrelsome and enjoy stirring things up. Brand from time to time explained his actions as motivated by a love of learning, but I have reviewed his record, and though he lived much of his life in academe, there is no evidence he loved learning or was in any way learned. The two controversies I have discussed here are not even very intelligent.