Where the Girls Are 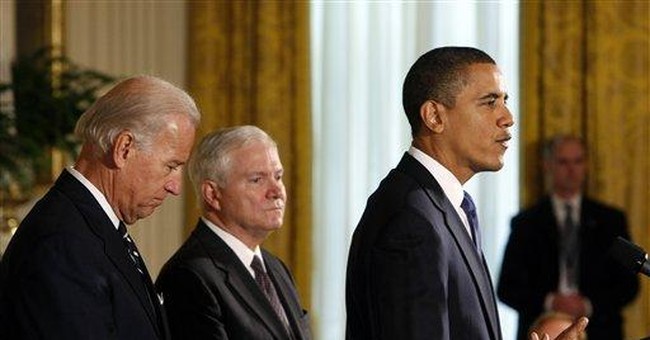 These are vexed times. The country is at war on two fronts. Rogue states are edging toward acquiring strategic nuclear weaponry. We have been through a very serious recession from which we may not emerge into the bright morn of economic health for years. The dollar is frail. The future of national health care, finance and corporate governance is in doubt. Yet that is not all. Over at The New York Times, an issue that continues to torment the bien-pensants is ... Well, let me quote the first sentence of the front-page tocsin that began the controversy Oct. 25: "Does the White House feel like a frat house?"

The proximate cause for this troubling query was that President Barack Obama had hosted "a high-level basketball game with no female players." Yet there was more. Apparently, there are anonymous women on the White House staff who feel uncomfortable in the presence of the president and his male associates even when they are fully dressed and not playing basketball. Reports the Times: "In interviews, five women who work in the White House or advised officials there described the culture with more of a collective eye-roll than any real sense of grievance or discomfort." The sentence is contradictory. The ladies collectively roll their eyes. Yet they have no grievance or discomfort? Are they having trouble with their contact lenses? What precisely is the problem?

One of the ladies, though still anonymous, gave a hint. Without wanting to sound "publicly critical" of the Obama White House, she confided to the Times' reporter that the "'sports-fan thing at the White House' could become 'annoying' and that her relative indifference to athletics could be mildly alienating." The Times elaborates, "Sports bonding can afford a point of entree with the boss."

Would it have helped if the president had invited this troubled woman to play basketball? He is 6 feet 2 inches tall, and presumably those who play with him are of above-average size. What are they to do with an average-size woman on the court? Or is she quite large? Nonetheless, Obama's basketball players must be pretty strong -- at least as compared with women. Yet maybe the eye-rolling women are pretty strong, too, but as strong as these men? Is that likely? I know that men and women are equal (which to feminists means identical), but are women equal to men on the basketball court? Why are none of our female college basketball players playing in the NBA? Oh, yes, and how did talking sports with colleagues become controversial and exclusionary? I thought there were a lot of women in the country interested in sports.

Subsequently, Times columnist Maureen Dowd has attempted to explain the troubling atmosphere in the Obama White House. "Men have always craved private realms -- the golf club, men's club, garage, workshop, shed; a place to get away from the chatter and clatter of women and kids," writes Dowd, who never has been married and has no children. In fact, in an embarrassing book, she has lamented over how difficult she has found it to be in close contact with men. Yet on she goes about men, explaining that Obama may need "a testosterone break from his estrogen nest," though testosterone does not break and estrogen does not nest. Temporarily off the topic of the Obama frat house, she then lets fall that former President George H.W. Bush -- she calls him "Poppy" -- "liked racy humor." That is news to many of us who knew him pretty well. Moreover, "So male advisers bonded with him by telling dirty jokes"; well, he had a lot of advisers. Some might have, but Dowd offers no evidence of dirty jokes.

Now, if there is a serious point being made here amid all this girlish petulance, it is that some of these White House women want to gain more influence in the White House by playing the gender card. In a party that has fragmentized itself with identity politics, there is the gender card to play and the race card and who knows how many other divisive cards?

So what is Dowd up to? Aside from revealing once again why she has so much difficulty getting a boyfriend, she reveals that she wants to play "Scrabble" with the president. In her stupendously undignified column, she admits it. Her colleague Tom Friedman was invited to play golf with the president in September. Now, she writes, "Since the president is finally willing to let women in on the games, I offered (?) up my own challenge: Scrabble." Whereupon she makes some gender-related jokes about words that start with X and Y to challenge "the smarty-pants Y chief executive."

Sometimes one reads about the controversies such women have over the men around them and one remembers how happy one was to get out of high school all those years ago.