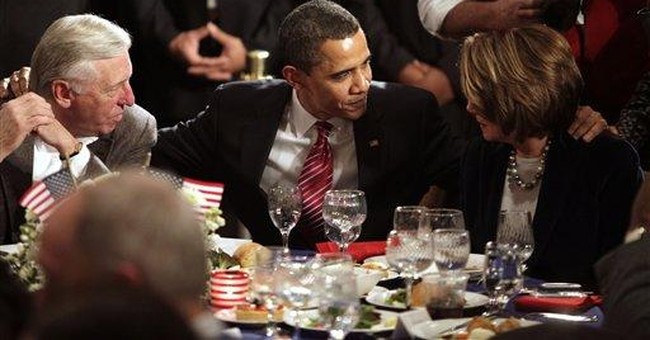 WASHINGTON -- The phenomenon of opulent Wall Street investment wizards contributing in large numbers to the Democratic Party, often to the left wing of the Democratic Party, struck me, until recent years, as perverse to the utmost. During the 2008 election cycle, 60 percent of the donations made by employees of the top Wall Street firms went to Democrats. Surely, these Wall Street donors had to realize that the left wing of the Democratic Party, which dominates the party, is utterly ignorant of the economic system that allowed the Wall Streeters their opulence. Yet as the imbecility of Citigroup and AIG and all the rest is revealed, it has become obvious that those who write checks for Madame Pelosi and for the enthusiasms of Al Gore actually know very little about free market capitalism. If they did, they would have realized that in capitalism, the bubble always bursts and the chain letter always runs out of suckers.

Reviewing the fall of these impossibly leveraged investment firms, it is apparent that their leading executives had no respect for prudent risk management or for prudence in general. Lending standards were foreign to them. Their laxness would have been spotted easily in decades past by prudent lenders. Yet for several decades now, standards of all sorts have been wasting away, for instance, entertainment standards, intellectual standards and investment standards. Where there was once Ella Fitzgerald there is now Britney Spears. Russell Kirk has been replaced by Arianna Huffington. Walter Wriston gives way to Robert Rubin. Obviously, when investment standards are abused, the consequences are more immediate than in the realms of entertainment and intellect. Financial loss is real and cannot be denied for long.

From our vantage point in early 2009, we can see that critics of Alan Greenspan were right when they said that he lowered interest rates too much between 2001 and 2004. But what about the products that the Wall Street wizards were selling? They were called -- in hushed tones of awe -- "complex derivatives." Actually, they were sausages stuffed with junk loans, mediocre loans, good loans and sufficient spice to sucker the credulous. These sausages were sold all over the world, and every time a transaction was made, those in on the transaction made money, even the vegetarians, even the economic ignoramuses. It was a kind of gigantic chain letter. Government regulators did not take heed. The politicians did not take heed. Those investment bankers who did and who spoke out were ignored.

As one of the now-discredited wizards, former CEO of Citigroup Chuck Prince, put it in an interview with the Financial Times: "When the music stops, in terms of liquidity, things will be complicated. But as long as the music is playing, you got to get up and dance. We're still dancing." He said that in July 2007. He was off the dance floor by early November. There was a time when such insouciance about excess "liquidity" would be unthinkable for a responsible Wall Street banker. Yet as I say, in recent years there have not been a lot of responsible officers in the Wall Street investment houses, and those who were responsible were not listened to.

On Wall Street, in London, and wherever else the madness took hold, huge salaries and bonuses were heaved around, even after the bubble had burst and the chain letter was seen for what it was. Now my worry is that the rogues of Wall Street will be replaced by the rogues of Washington. A fundamental problem of our time is a widespread insouciance to prudent standards. Such standards would have restrained the opportunists who danced when they should have practiced due diligence. Now let us hope the politicians will return to prudent standards in fashioning their resolution of the financial crisis. Thus far, there is little reason for optimism.