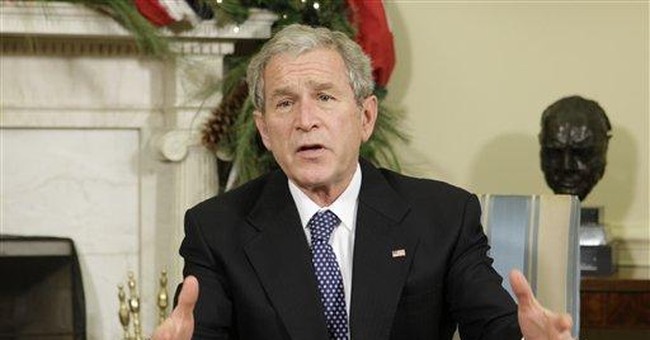 WASHINGTON -- My agents report that President George W. Bush even now is contemplating memoirs. When it comes to writing memoirs, I humbly submit that even a commander in chief should take counsel from an editor-in-chief, especially if the editor-in-chief is an admirer.

As the retiring president heads back to Texas, he might bear in mind that his presidency was unusually turbulent. His memoirs will be the record of a president whose time in office began and ended with two stupendous crises that only Franklin Roosevelt and Ronald Reagan experienced in modern times, though the chronological orders of their crises were more orderly. They moved from financial crisis to geopolitical crisis. Mr. Bush's first crisis came in his first year, with 9/11 -- a contemporary Pearl Harbor more treacherous than the first Pearl Harbor. His second came in his last year, the subprime mortgage day of reckoning -- the credit freeze -- ultimately the worst financial crisis in a century.

In recent interviews, Mr. Bush has sounded glum. As an editor, I advise him to review the facts and take heart. Both of his crises originated in his predecessor's administration. His memoirs must make that clear. In fact, it is his duty to set the record straight. Gentleman that he is, Mr. Bush is going to have to find the right tone in laying out that fact. He must not appear to be defensive or to be scapegoating. After all, he arrived at the White House after America's foolish holiday from history. It is perfectly appropriate that in the holiday's aftermath, its revelers be held accountable.

There is not much he can say about the subprime reckoning except that his 2002 budget was critical of the excesses of Fannie and Freddie. In 2003, his secretary of treasury was equally critical and called for regulation, to which Rep. Barney Frank retorted, "I do not think we are facing any kind of a crisis."

On the other hand, the 43rd president should have a lot to say about his response to 9/11, the war on terror, and the toppling of Saddam Hussein. Those were the major undertakings of his administration, but given his apparent glum humor, I am not sure he will address those matters with the requisite confidence. Early this month, he told ABC News that his "biggest regret" as president was how he handled intelligence estimates of Saddam's weapons of mass destruction. Mr. Bush, the post-9/11 world was a world that demanded from you "action this day," and you passed the test.

After 9/11, no one knew where or when the next attack might come. Saddam, our longtime antagonist, actually applauded the attacks, an indiscretion duplicated by no other international figure, save Osama bin Laden. Moreover, Saddam purposely duped world leaders and his military leaders into believing that he had weapons of mass destruction. Now we know he did not have them ready to go, but we also know that he had them available on short notice. He could have sent chemical and biological weapons in a matter of weeks to terrorists or to his intelligence agents for attacks on American soil or almost anywhere else.

The evidence is available for anyone who wants to review it. Last summer, The Associated Press reported that a "secret U.S. operation" had transferred 550 metric tons of "yellowcake," "the last major remnant of Saddam Hussein's nuclear program," to Montreal for peaceful purposes. So contrary to what your opponents tell you, Mr. Bush, the strutting tyrant did have the makings for nuclear weapons. Withal, he had biological and chemical weapons available in a few weeks' notice. That is a key finding of the Iraq Survey Group.

When the president gets back to Texas, I encourage him to read the really splendid memoirs "War and Decision: Inside the Pentagon at the Dawn of the War on Terrorism," by his undersecretary of defense for policy, Douglas J. Feith. It convincingly explains the justification for war with Saddam. Quoting the Duelfer Report on the findings from the Iraq Survey Group, Feith records that at the time of our invasion, "Iraq still possessed small but significant dual-use facilities capable of conversion to small-scale BW agent production." Small-scale, but such agents are enormously dangerous. The report continues, such dual-use facilities "could be converted for BW agent production within 4 to 5 weeks." "In sum," Feith writes, "the Iraq Survey Group confirmed Saddam's intention and capability to produce biological and chemical weapons."

Though stockpiles of such lethal weaponry never were found, we have plenty of evidence that Saddam had the facilities, the materiel, the personnel, the capability and the intent to create biological weapons. Feith writes that when Saddam had rid himself of sanctions, the evidence is he would have revitalized his WMD programs. Nothing would stop him but war.

In preparation for the Bush presidential memoirs, I suggest Mr. Bush read the Feith memoirs. Finally, Mr. President, in the spirit of the season, this politically correct editor-in-chief wishes you merry and happy .