Ellie Bufkin
|
Posted: Sep 10, 2020 1:10 PM
Share   Tweet
The opinions expressed by columnists are their own and do not necessarily represent the views of Townhall.com. 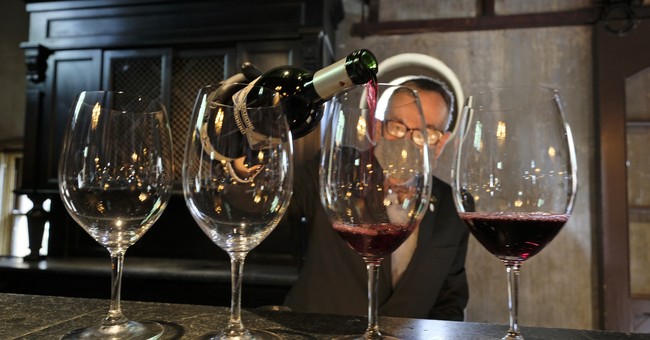 A recent article from the San Francisco Chronicle cast wine professionals in a rather unflattering light and asserted that certain practices of sommeliers and wine journalists were actually racist. The author insisted that tasting terminology used by sommeliers and wine writers leaned too heavily on European influence and catered only to those of European heritage.

The author Esther Mobley, who is credited as the San Francisco Chronicle's wine critic, explains how she came to the conclusion that wine tasting terminology is racist and sexist to boot.

Wine language is so often absurd that it’s a punchline. Notes of smoldering tobacco or forest underbrush or underripe Jonagold apple — it sounds almost farcical in its specificity. Even worse is when the descriptor is inedible. How many people have actually tasted a wet river stone, anyway?

But now, it’s becoming clearer than ever that the conventional language used to describe wine isn’t merely intimidating and opaque. It’s also inextricable from racism and sexism, excluding dimensions of flavor that are unfamiliar to the white, Western cultures that dominate the world of fine wine and reinforcing retrograde notions of gender.

For years, I worked in this industry as both a sommelier, certified by the famed Court of Master Sommeliers, and as a wine journalist. And from experience, I can say the learning curve to get to the summit of wine professionalism is staggering for anyone, regardless of their ethnicity or country of origin.

But far from racist or sexist, the wine industry is actually a bastion for inclusion and equal opportunity. Any person, from any background, can achieve the greatest success in the wine expert field as long as they are willing to put the work in. It is not limited only to those born into a wealthy family; it is not limited only to those with expensive graduate degrees and it certainly excludes no person based on their biological sex or race.

It is not, however, easy, under any circumstances. I didn't grow up in a wine family or among the great vineyards of Europe. I fell in love with the idea of wine tasting in my twenties while working as a server in a restaurant, a job widely acknowledged to be one of the lowest skill requirement professions available.

Despite my western European ancestry, as Mobley implied, I wasn't privy to most of the flavors and aromas more tenured wine pros were describing to me. Instead of slamming down my tasting glass and proclaiming the learning process "unfair," however, I went out and figured out what some of this stuff tasted and smelled like. It turned out, that wasn't particularly hard. And I learned to be a good cook in the process.

It was a years-long venture that forced me to create new methods of learning and required me to stay constantly curious. It was anything but a smooth ride given to me on a platter; but if it had been easy, it wouldn't have been worth the effort. Despite having left the industry some years ago, receiving my Certified Sommelier pin after years of studying, tasting, failing, and repeating remains one of my proudest personal achievements.

Former colleagues of mine from even more varied backgrounds, including one African American man who confided in me once the hellacious circumstances of his childhood, have become some of the most celebrated sommeliers in the world. It truly is a remarkable profession and achievement is only limited by the amount of God-given talent and hard work a person is willing to put in it, nothing else.

But Mobley and others want us to believe the system is rigged against people based only on their sex or skin color. This is bigotry by the standard of lowered expectations: to insist that a person could only succeed in an industry if it is modified to suit them.

Recently, the very same organization that acknowledged my hard work and that of many others, came under fire from Black Lives Matter activists for their use of the word "Master" in conjunction with the top title given out by the group. The term obviously appears in the very name of the organization, the Court of Master Sommeliers, and any assertion of racism for use of that title is obviously absurd.

For a profession such as wine, sexism is very easily eradicated by simply saying that only those with the right qualifications can reach the summit. There are many parts to a sommelier certificate test: tasting ability, knowledge of vintages and regions, and service standards. But there is no test on whether the applicant is a man or a woman or whether they are white or black. The fact that there are more white, male Master Sommeliers than any other category points only toward the fact that the profession seems to have been more alluring to white men than any other group.

Calling "Racism" and "Sexism" on any industry that doesn't have the right intersectional quota is outrageously unfair, particularly for an industry that has its door wide open to any person, regardless of wealth, race, sex, or any other factor.

At a time where the restaurant industry and the wine profession is hurting more than they ever have in this country, attempting to create a strawman of bigotry and oppression instead of looking for real solutions for the hospitality industry is utterly shameful.