Edward Bartlett
|
Posted: Jan 01, 2022 12:01 AM
Share   Tweet
The opinions expressed by columnists are their own and do not necessarily represent the views of Townhall.com. 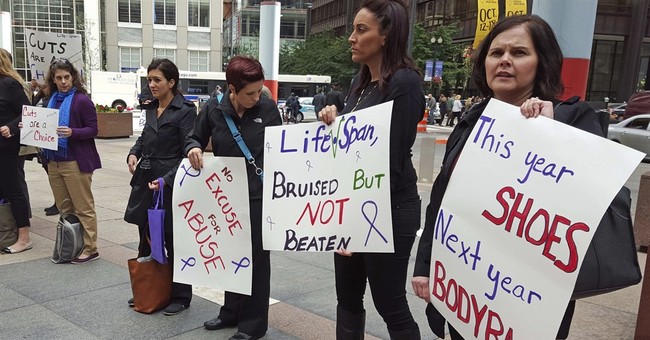 On March 23, 2020 the National Task Force to End Sexual and Domestic Violence issued an Alert with a startling coronavirus claim: “Survivors of domestic violence and sexual assault are facing extreme danger and risk.” The Task Force also asserted, without providing any evidence, that “shelters and victim service organizations are now grappling with the unprecedented challenge of communally housing and providing services for survivors.”

The United Nations issued even more alarming claims, predicting a “shadow pandemic of violence,” “alarming upsurge,” “one of the greatest human rights violations,” a “horrifying global surge” against women, and more. The UN Department of Global Communications warned, “Confinement under stay-at-home orders is ‘a perfect storm’ for violent behavior behind closed doors.”

Media accounts obediently reported the impending crisis, based on unverifiable anecdotes and grisly predictions issued by abuse activists who stood to benefit from the expected influx of funding from sympathetic donors.

The logical flaws of these articles were easy to spot.

The New York Times published an article titled, “Domestic Violence Calls Mount as Restrictions Linger: ‘No One Can Leave,’” that recounted the domestic violence situation in Chicago. The article stated that from January 1 to mid-April 2020, domestic violence police calls increased 12%. But Illinois Gov. Pritzker’s stay-at-home order didn’t take effect until March 21. So including abuse data from January to mid-March skewed and invalidated the overall conclusion.

Other reporters simply fabricated the numbers. The New Mexico Political Report made this claim: “Last week, domestic violence incidents in Bernalillo County reportedly jumped 78 percent.” But when contacted for confirmation, County Undersheriff Larry Koren was unable to confirm anything resembling these numbers.

Nearly two years later, it has become clear that the abuse apocalypse never came to pass. There was no overall increase in the number of hotline calls, calls to police, or commission of crimes. There was no “surge” of domestic violence, either in the United States or internationally.

In the United States:

- The National Domestic Violence Hotline revealed that the number of inquiries in 2020 was 363,000, which was the same number as in 2018.

- Criminologist Matthew Ashby reported that overall, there was a 2% decrease in seven cities in domestic violence/family dispute police calls during the course of the pandemic.

- The FBI reported that the number of partner homicides committed by spouses, girlfriends, and boyfriends remained steady in 2020, compared to previous years.

- In India, Smriti Irani, Minister for Women and Child Development, was asked whether the lockdown has increased domestic violence against women. Her response, “It is false.”

- In the Netherlands, the National Police noted a 12% domestic violence decline, compared to the same week in 2019.

Reports from Albania, Austria, Canada, Russia, Spain, and Tasmania all reached the same conclusion: No increase in domestic violence following the imposition of COVID stay-at-home policies.

But predictably responding to the furor, politicians climbed onto the abuse bandwagon. On March 27, 2020 the President signed into law the CARES (Coronavirus Aid, Relief, and Economic Security) Act, which allocated $45 million for domestic violence programs.

During an October 5, 2021 hearing, Sen. Amy Klobuchar of Minnesota claimed a 40% increase in domestic violence in her state. That testimony appeared to contradict a September 24, 2020 article in the Minneapolis Star Tribune reporting that the number of domestic violence calls had fallen over a two-month period beginning in May. When I sent a message to Klobuchar’s office to provide the source for her claim, no response was received. I later asked a former police chief from Minnesota to comment on the Klobuchar statement. His blunt reply: “No way that could be true.”

The Big Lie has been described as the repeated dissemination of a falsehood so grandiose that no person would believe that someone could have the impudence to so baldly distort the truth. The purpose of the Big Lie is to further an ideological, social, and political agenda.

In this case, the goal is promote a stereotype of men as abusers and women their victims – a stereotype that is gainsaid by the hundreds of research studies that show domestic violence affects men and women equally.

Edward E. Bartlett has a doctoral degree from the Johns Hopkins University School of Public Health. He now serves as president of the Coalition to End Domestic Violence.