Eradicate Poverty? We Already Know How

Ed Feulner
|
Posted: Apr 26, 2019 12:01 AM
Share   Tweet
The opinions expressed by columnists are their own and do not necessarily represent the views of Townhall.com. 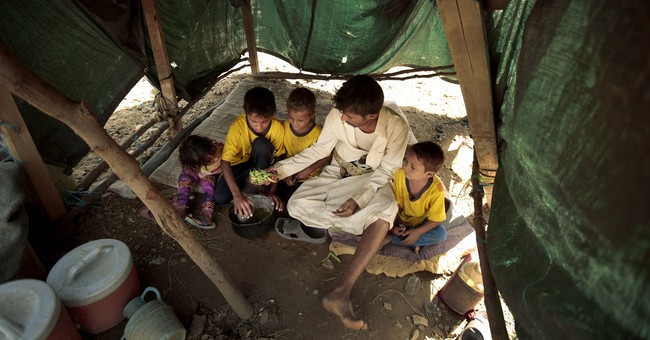 That flouts the conventional wisdom – at least as it’s presented by many politicians and “mainstream” media outlets. They would have us believe that free enterprise (or to use their preferred bogeyman, capitalism) exacerbates poverty. In fact, they think we can’t help the poor without a heavy dose of socialism.

But the facts aren’t on their side. They have the equation exactly backwards. What alleviates poverty isn’t so much government doing something. It’s government getting out of the way.

“Democratic capitalism has done more to pull people out of poverty than any other system in the history of humanity,” best-selling author Arthur Brooks says in a recent video for the Daily Signal.

He recalls the stark pictures found in National Geographic magazine in the early 1970s, illustrating the famine that was killing hundreds of thousands of people in east Africa. Seeing these poor children with distended bellies and flies on their faces was heartbreaking, but the message, Brooks recalls, was that nothing could be done.

“Even as a little kid, I knew the charity wasn’t going to get it done,” says Brooks, the president of the American Enterprise Institute. “It was a hopeless feeling.”

So one would hardly expect conditions to have improved for the world’s poor in the decades since then. And yet, unbeknownst to most people, they have.

Some 70 percent of Americans think that hunger has gotten worse since 1970. But it’s not true: 80 percent of starvational poverty has been eradicated in the last 50 years. Poverty still exists, to be sure, but has been substantially reduced since Brooks saw those searing images in National Geographic.

“Since 1970, the percentage of the world’s population living on the equivalent of less than a dollar a day has fallen by more than 80 percent,” he wrote in a 2012 Washington Post article. “Hundreds of millions of people have been pulled out of grinding deprivation.”

Can we thank U.S. foreign aid, or some well-crafted U.N. development project? Those are the remedies usually touted by pundits and politicians.

Nope. It was free trade.

In China, for example, some 400 million were pulled out of absolute poverty between 1981 and 2001, thanks to free trade and foreign investment. People can rail all they want about globalization, but it’s made a huge difference in the lives of poor people who would otherwise languish and die.

At The Heritage Foundation, we’ve been documenting the effect of free enterprise for years with our Index of Economic Freedom. This annual guide takes a hard look at the economic conditions in every country around the globe, and the evidence is unambiguous: The freer the country, the more prosperous it is.

Per-capita incomes are much higher in nations that are economically freer. Economies rated “free” or “mostly free” in the 2019 Index enjoy incomes more than twice the average levels in all other countries — and more than six times higher than the incomes of people living in economies rated as “repressed,” such as Cuba or Venezuela.

So how do we help the poor today? Not by yielding to the demands from many on the left who insist we need more government. We alleviate poverty by explaining who the real hero is: free enterprise. We highlight its successes and show that poverty persists where it is denied.

“This is not about business,” Brooks adds. “This is not about ideology. This is about human lives — real people, real faces, real stories. These are the people that we need to fight for today. And we know how to get it done.”