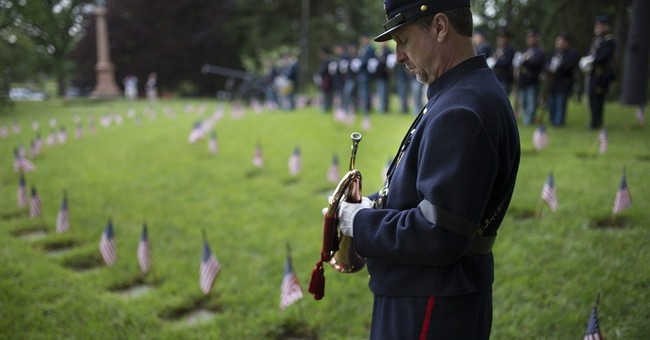 We recently celebrated Memorial Day, which is all too easy to view simply as the unofficial start to summer -- as the long weekend that launches beach-and-barbeque season.

But we owe it to the brave soldiers whose bodies lie under those unassuming grave markers to spend some time remembering their sacrifice, as well as the sacrifice of the families that would never welcome them home again.

Otherwise we risk viewing freedom merely as our birthright. We forget that it carries a price -- one that must be paid by each generation.

And not just any price. Freedom requires hard work and skilled diplomacy, but there are times when it also demands blood. And if we don’t thank God often for those willing to walk toward the guns aimed by those who would take our freedom away, do we deserve to enjoy the fruits of their victory?

Shaking off this complacency takes effort, though. Consider the short poem “Grass,” written by Carl Sandberg in 1918:Pile the bodies high at Austerlitz and Waterloo.

Pile the bodies high at Austerlitz and Waterloo.

Shovel them under and let me work.

I am the grass; I cover all.

And pile them high at Gettysburg.

And pile them high at Ypres and Verdun.

Shovel them under and let me work.
Two years, ten years, and the passengers ask the conductor:

What place is this?
Where are we now?

I am the grass.
Let me work.

Austerlitz and Waterloo are key battles that date back to the Napoleonic Wars of the early 1800s, while Ypres and Verdun took place during World War I -- then called “the war to end all wars,” because who could imagine another massive conflict occurring on such a global scale?

Just two decades later, though, Hitler’s tanks were rolling through Europe, initiating a war that would somehow top the then-unimaginable casualty lists of World War I.

Yet each time, our soldiers have answered the call. From Bunker Hill to the Battle of the Bulge (and if those names are unfamiliar, I urge you to learn more about them), they have stepped forward in defense of freedom.

If the biggest problem we encounter is a busy grocery store as we stock up for a trip to the beach, we can thank (among others) the men who died crossing Omaha Beach on D-Day. Watch the searing opening scenes of “Saving Private Ryan” to get a sense of how incredibly difficult this was -- and how much we owe them.

Saluting them on Memorial Day is the least they deserve for facing such horrors.

But just as there are no permanent defeats, there are no permanent victories. We shouldn’t look only to the history books -- we can look to the troops who have been fighting (and continue to fight) in our own lifetime to protect our freedom. Thank God for soldiers such as Chris Kyle of “American Sniper” fame -- ones who put their lives on the line daily and prove that “God, country, family” is more than a slogan.

Just as we praise living veterans for their service, let’s also remember those who aren’t around to be thanked. They gave, as President Lincoln once said, the “last full measure of devotion.” Let us do all we can to advance the cause they died for -- and prove worthy of their sacrifice.