Yet Another Pre-School Program? 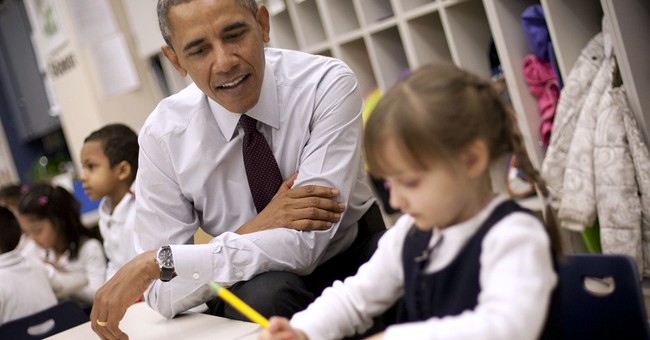 When some people hear that the president has proposed a new federally funded pre-school program, they might think, “Great idea. It’s about time!”

But they’d say this, surely, because they’re unaware that Washington is already running pre-school programs. Not just one or two, in fact, but 45 early learning and child-care initiatives. And no fewer than 12 of them are explicitly designed to provide early childhood education. The rest, however, also allow funds to be used for that purpose.

This despite the fact that more than three-quarters of the nation’s four-year-olds are already enrolled in some form of early education and care.

The president’s pre-school initiative, part of his fiscal year 2015 budget proposal, is supposed to expand access to “high quality preschool” for every 4-year-old child in the country. And there are legislative proposals in the House and Senate that would do the same.

What need would this initiative fulfill that isn’t now being addressed by one of the following programs?

· Head Start. This flagship pre-school federal program is probably the most well-known. Taxpayers have spent more than $180 billion on Head Start since 1965; it costs $8 billion a year. Yet an evaluation by government’s own Department of Health and Human Services shows “little to no effect on cognitive, social-emotional, health, or parenting outcomes” on the participating children. Talk about a bad return on your investment. Head Start is also rife with fraud and abuse, with staff misreporting income to enroll more students.

· Temporary Assistance for Needy Families. TANF provides federal funds to states for a variety of welfare programs, including child care funding. During FY 2012, $2.6 billion in TANF spending was for child care programs.

· Social Services Block Grant. Established in 1981, the SSBG provides $1.7 billion to states for child care, health care, and other social services. In FY 2009 (the most recent year for which data are available), 14 percent of SSBG expenditures (including allowed TANF transfers) were for subsidized child care.

· Child Care Development Fund. The CCDFwas funded at $5.2 billion in FY 2012 with approximately 1.7 million children receiving subsidized care. In addition, states can use up to 30 percent of their Temporary Assistance for Needy Families (TANF) funds for CCDF purposes.

And this is on top of the many state-run pre-school programs out there. Forty states and the District of Columbia provide subsidized pre-school at the state level.

The list goes on and on (Heritage Foundation education experts Lindsey Burke and Rachel Sheffield have a complete list in their latest paper), but you get the idea.

“Moreover,” they write, “a large majority of mothers indicate that they prefer to stay home when their children are in their most formative years (up to age four); 80 percent of mothers who work part-time indicate that is the ideal scenario for them.”

If federal policymakers want to help, rather than create a new program, they should try reforming the many that they’re already running. There are wasted funds and poor results to spare, so they should have plenty to do.

We’ve all heard jokes about the “Department of Redundancy Department,” but when you’re handed a real-life example like this, it’s not funny anymore. Anyone who thinks we need a 46th federal pre-school program is in need of some serious remedial education.