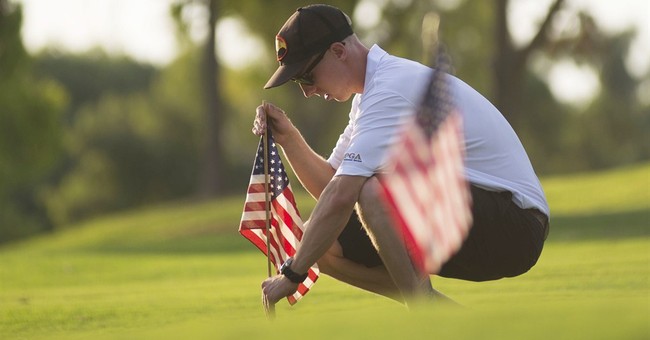 It’s one thing to say, “Thank a veteran.” It’s another to actually do something to show that gratitude.

Take the World War II veterans that made headlines last month during the government shutdown. Largely overlooked in the furor that erupted when they were barricaded from their own memorial is how they got to Washington, D.C., in the first place: through a non-profit group known as the Honor Flight Network.

The seed that would create the HFN was planted shortly after the WWII memorial opened in 2004. Earl Morse, a retired Air Force captain working in a Department of Veterans Affairs clinic in Springfield, Ohio, knew from talking to patients who were veterans that most wanted to see it.

But then, he said, “I would see my World War II veterans some three, six months later, and I’d ask them if they’d gone to see it. Three hundred of them, and not one of them had been to it. Reality set in. They were never going.”

Not without the help of the good-hearted individuals who would come to comprise the network of volunteers that make the honor flights possible. The HFN started small, of course, but soon spread, ably assisted by Morse’s co-founder, Jeff Miller, a small-business owner in North Carolina who is the son of a WWII vet.

Today, the program has 127 “hubs” in 41 states and has transported about 100,000 veterans to see the memorial. Local volunteers nationwide arrange for the veterans to board the flights, while others at the Washington end meet, greet and transport them from Washington's airports to the site.

This is a prime example of one of our nation’s greatest strengths, one that’s worth celebrating as we prepare to mark another Veterans’ Day: how capable Americans are of pulling together and acting in ways that benefit not just ourselves, but our neighborhoods and our communities.

Our World War II vets saw our national motto, E Pluribus Unum (Latin for "Out of many, one"), become a reality in the aftermath of Pearl Harbor. Upon hearing the news of the first attack on the United States since the British Invasion in the war of 1812, our nation united as one against Japan and its allies Germany and Italy.

Those soldiers, the vast majority of whom had never set foot on the islands of Hawaii or knew any of the 2,340 men killed in the attack, were not directly affected or threatened by the Japanese assault. Yet they signed up to protect their fellow citizens and their nation.

The patriotism of these recruits, their sense of community, and courage, brought them together to volunteer to risk their lives in ways they could hardly foresee. An attack on one was considered an attack on all.

This sense of community was necessary for our freedom and liberty to survive. Rightly called “the Greatest Generation,” America's World War II soldiers fought the “axis of evil” of their day and won. When they came home, they were duly celebrated, then went back to their individual lives. The bond they formed was between individuals, brothers-in-arms.

It was a bond only people who have been through something like war can experience. That sense of brotherhood was necessary for them to survive the horrors they encountered. When they returned, they were changed as individuals, but they did not seek to impose the conformity and discipline of military life onto their civilian communities.

The war could not have been won without the sense of community and responsibility that emerges spontaneously whenever America is attacked. And we would not be honoring our WWII veterans properly today without individuals coming together as they do in volunteer projects such as the Honor Flight Network.

With an estimated 640 WWII veterans dying each day, “our time to express our thanks to these brave men and women is running out,” the HFN website notes. Let’s hope that this Veterans’ Day will prompt more Americans to emulate that spirit which has so nobly carried us through good times and bad.