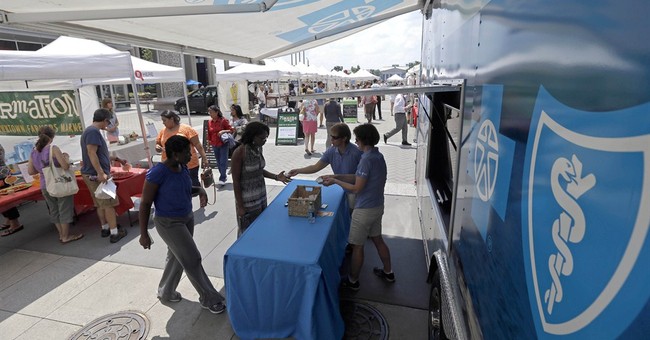 So how much more is your health insurance going to cost you?

That’s the question, really, as Obamacare begins taking effect and the stories pour in from around the country: how much your premiums are going up, not if they are.

Rising costs are a fact of life, but the changes Americans are seeing as a result of the president’s signature law are putting the “shock” in “sticker shock.” I recently had lunch with a friend who said his perfectly healthy 28-year old son had just received a notice from Blue Cross-Blue Shield of Illinois that on Jan. 1, his monthly premium will go from $90 to $268.

It’s no coincidence that this is the effective date of the first phase of Obamacare -- whose formal name, the Affordable Care Act, looks increasingly ironic with each passing day.

This 28-year-old is far from alone. Americans everywhere are getting such letters, as insurance companies and employers are forced to explain how the new law is necessitating much higher premiums.

Take Ben Neptun and his wife, Charla. Home health nurses in Mobile, Ala., they each make about $23 an hour, and manage a tight budget for their blended family of five -- a 15-year-old, a 2-year-old, and a 10-month-old. According to Ben, “there’s no room for several hundred dollars extra per month” in their budget.

Unfortunately, that’s exactly what they’re going to need, thanks to Obamacare.

The Neptuns buy their health insurance directly from Blue Cross-Blue Shield. They currently spend about $2,000 a year (not including the monthly premium) on health care for the family. But like so many other Americans, they recently got the dreaded letter -- and learned that their premiums will more than double, from $419 to $899.

“Thousands of Californians are discovering what Obamacare will cost them,” begins an article in the Los Angeles Times, “and many don't like what they see.”

Think about how changes like this affect the economy. If you suddenly have to come up with an extra $200, $300, $400 a month (or more), what do you do? You economize. You eat out less. You drive that old car even longer. You put off moving. You stop saving what little money you were putting aside. You contribute less to retirement funds.

What if you’re an employer? You have to cope with these skyrocketing costs, too, and in the same way: by economizing. You delay making necessary changes to improve your business. You rely on old equipment for longer. You reluctantly raise prices, knowing it will cost you customers. You cut back on hours for your employees.

Most importantly? You stop hiring.

According to a new Gallup survey, two out of every five small-business owners report that they are holding off on hiring because of Obamacare. They need employees, yes, but they also need to be able to afford them. And the changes brought about by the new health care law have made affordability a thing of the past.

Just ask the Federal Reserve, which regularly collects feedback from businesses and issues reports about the economic outlook. “Many contacts also commented on reluctance to expand due to uncertainty surrounding the Affordable Care Act; some employers cut hours or employees,” the Reserve says in its latest report.

So we see the fallout from Obamacare even before it takes full effect: Workers facing soaring additional costs for health coverage -- even as their hours are cut, leaving them with even smaller paychecks. Employers refusing to hire. And each group feverishly looking for ways to cut costs.

Small wonder that Ben Neptun says he’d “rather file bankruptcy and do without health insurance” because “the fines are less.”

There are financially sound ways to reform health care so that more people get the coverage they need. The UN-Affordable Care Act doesn’t come close.