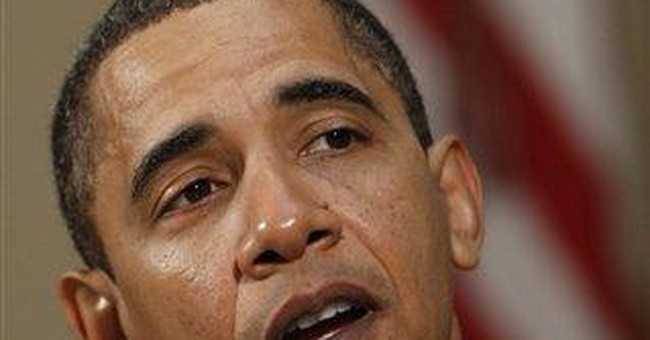 These are the times that try conservatives’ souls.

So why remain upbeat? Because our country still has the Declaration of Independence and the Constitution. They’re the touchstones of our liberty -- and the conservative trump cards in the battle of ideas.

“We don’t need to remake America, or discover new and untested principles,” writes scholar Matthew Spalding in his latest book. “The change we need is not the rejection of America’s principles but a great renewal of these permanent truths about humanity, politics, and liberty -- the foundational principles and constitutional wisdom that are the true roots of our country’s greatness.”

In short, we need a roadmap back to where our country should be. That’s where Spalding’s “We Still Hold These Truths: Rediscovering Our Principles, Reclaiming Our Future” comes in. It outlines the core principles of liberty, details the progressive liberals’ assault on those principles, and explains why and how we must defend and reapply them if we are to save our country.

Every American should know the founding principles of our country. “The meaning and power of these ideas will be lost in the course of a lifetime if they are not taught to each generation of students,” Spalding warns. “The public mission of our schools in the past was to transmit this knowledge to young Americans as the most important requisite for democracy. This must be the mission of our schools again.”

But there’s no need to wait for a new generation of citizens to rise and lead us. Elected officials should also act.

“One small step in this direction would be to require all legislation to contain an explanation of its constitutional authority, compelling at least a consideration of each proposal’s constitutional legitimacy,” Spalding writes. Policymakers should also work backward, reviewing existing laws and regulations to ensure they pass constitutional muster.

“Too many programs, once started, are automatically reauthorized and become part of the permanent bureaucracy,” Spalding writes. That’s why Congress should “periodically review and authorize anew every major program, creating an ongoing mechanism that would work against the steady, automatic expansion of government. Rather than assuming their permanence, Congress should subject government programs to regular reevaluation of their authority, purpose, and effectiveness.”

But these days, Congress passes 1,000-page bills that most members have no time to read, let alone consider. Instead of deliberating, American lawmakers spend much of their time overseeing an unelected bureaucracy of regulatory policymakers.

In fact, Spalding notes, “Although the Constitution vests legislative powers in Congress, the majority of ‘laws’ are promulgated by administrative agencies in the guise of ‘regulations’ --a form of rule by bureaucrats who are mostly unaccountable and invisible to the public.”

Of course, as lawmakers retake their traditional role, judges will need to reduce their intrusion into policy-making.

“It is generally supposed that judges have the final say concerning every constitutional question,” Spalding writes. “These arguments need to be challenged and overcome in the public view, both as a matter of historical accuracy and a necessary condition for reinvigorating limited government, constitutionalism, and the rule of law. By allowing the Constitution to be treated as a malleable document, we should not be surprised that the ‘living’ Constitution has deadened the political mind of many Americans.”

Sad but true. In the years ahead, let’s hope that Spalding’s book becomes a textbook to reopen our students’ political minds.

The principles of our Declaration and our Constitution must again become “an expression of the American mind,” as Thomas Jefferson once said. We can -- and must -- insist that our leaders again abide by true constitutional principles. But we also must rediscover these principles as a people if we are to reclaim our future.