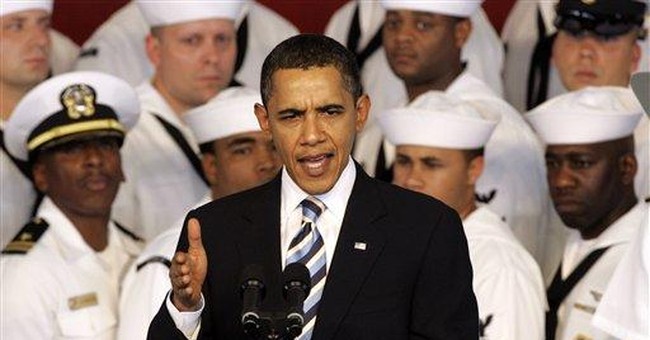 This fall, as American families anticipate the holiday season and an uncertain economy in 2010, they’re likely to decide to cut back. Maybe they’ll stay home for Thanksgiving instead of flying to Grandma’s house. They’ll put fewer gifts under the Christmas tree.

It’s a pity our political leaders aren’t inclined even to consider such frugality.

Two recent stories prove that, far from cutting back in the face of recession, Congress and the Obama administration are eager to expand entitlement spending. Take Social Security.

Every January, recipients’ benefits are adjusted for inflation. This cost of living adjustment (COLA) usually results in retirees receiving a larger payment, because the cost of living usually goes up. But it didn’t this year.

The recession has driven prices down across the board, and the cost of living has actually declined by almost 5 percent. Because of that, and because Medicare premiums won’t increase next year, spending analyst Andrew Biggs of the American Enterprise Institute estimates that the average Social Security recipient will have about $725 more in purchasing power next year. So, reasonably, Social Security plans to skip the COLA.

But not if the Obama administration can help it. The president wants to give each person on Social Security $250 next year. That may not sound like a lot, yet this little giveaway would cost future taxpayers $13 billion. And, as Social Security expert David John of The Heritage Foundation writes, it would start “the process of converting the program from an earned benefit funded by a worker’s own contributions to a welfare program.” With the program already facing massive unfunded deficits in the decades ahead, the proposed giveaway is exactly the wrong approach.

At the same time Obama was prepping to shower seniors with $250 checks, Congress was trying to spend a much bigger sum -- almost $250 billion -- without actually paying for it.

Here’s how lawmakers got into this trap. While stumping for his version of health reform, President Obama has repeatedly insisted he wouldn’t sign a bill that “adds one dime to our deficits, either now or in the future, period.” But one of the reasons federal spending on health care is out of control is because Medicare spending grows faster than the economy as a whole almost every year.

More than a decade ago, lawmakers passed a law that was supposed to solve that problem by capping payments to doctors. According to the law, fees paid to doctors under Medicare will be slashed by 21.5 percent this year, and by 40 percent over the next five years. Of course, no lawmaker wants to be accused of cutting payments to doctors. So every year lawmakers in both parties vote overwhelmingly to override their own law.

And that’s the problem. Overriding the scheduled cuts this year would add about $250 billion to the cost of ObamaCare, and put the president at risk of violating his promises not to increase the deficit. Instead, Senate Majority Leader Harry Reid proposed a stand-alone bill that pundits called the “doc-fix” bill. It aimed to spend $250 billion over the next 10 years without that spending counting toward the price of any proposed health care reform bill.

Senators used a procedural maneuver to prevent that bill from being voted on. But the idea of shifting spending from one column to another to hide costs may make a comeback as lawmakers debate health reform behind closed doors.

The late Sen. Everett Dirksen supposedly said, “A billion here, a billion there -- and pretty soon you’re talking real money.” We could paraphrase that today: “$250 here, $250 billion there -- eventually you destroy an already teetering entitlement system.”

These are changes our government can’t afford. And they’re ones the American people shouldn’t stand for.