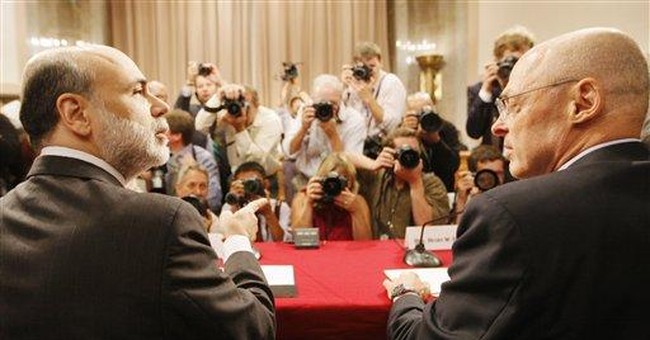 Nobody has ever lost money by betting on the federal government to overreact to a crisis. And as Congress weighs a bailout of the financial markets, it looks as if that’s where the smart money should go yet again.

Any day now, lawmakers are expected to agree to invest some $700 billion -- more than the country spent on the first five years of the Iraq war -- to restore the financial markets. But lawmakers should also be careful to protect taxpayers.

Let’s begin by noting that there is a legitimate federal role in extraordinary circumstances. There are things Washington needs to do to keep our economy functioning. For example, it was a smart move for the Federal Reserve to pour $150 billion into the system. The Fed exists, after all, to make sure money keeps moving and credit remains available.

But as lawmakers debate buying up hundreds of billions in assets, they should realize that the government’s aggressive meddling in financial decision-making is what got our economy into this mess in the first place. The long-term answer isn’t more federal control, it’s a return to free-market principles.

One way to do so is to make sure that any bailouts are as limited as possible. If a private firm is so integral to the financial operations of the economy that it requires assistance, so be it. But in that case, the taxpayers’ should be investing as little as possible, and company management and stockholders should suffer the consequences of their bad investments.

Also, lawmakers should avoid turning the rescue package into a Christmas tree, loaded up with goodies for special interests. One proposal in a Senate bill would require 20 percent of any profitable transaction to be deposited into a special fund that pays for low-income housing. That’s a silly idea that would, in the long run, only serve to make things worse.

Consider one of the root causes of today’s problems: the collapse of the sub-prime mortgage market.

A big reason for that failure is federal policies aimed at increasing home ownership. Getting more people into homes was a stated goal of the Bush administration and lawmakers of both parties, many of whom received massive campaign contributions from government-sponsored enterprises Fannie Mae and Freddie Mac.

Fannie and Freddie played up their status as GSEs, telling shareholders they were a safe place to invest. Now they’ve been absorbed by the government, meaning investors may indeed be safe, but taxpayers are at risk. Washington needs to get out of the housing business. It shouldn’t be a federal concern whether or not someone owns a home.

Also, Wall Street firms should consider changing how they compensate their investment bankers. Many earn the lion’s share of their pay in bonuses, a policy that tends to encourage bankers to make risky deals to prop up the short-term bottom line at the expense of long-term planning. Firms should revise their compensation packages, paying bonuses based on a 3-5 year rolling average. This, of course, should be done by management, not by federal regulation.

Similar shady accounting was occurring at Fannie Mae, by the way.

The Office of Federal Housing Enterprise Oversight, the regulator charged with keeping an eye on Fannie and Freddie, reported two years ago that, “Between 1998 and 2004, Fannie Mae’s senior management deliberately and intentionally manipulated accounting methodologies to hit earnings targets and help executives maximize their bonuses.” That’s why former executives were able to cash out millions of dollars and stick taxpayers with the bill.

Finally, lawmakers should repeal Sarbanes-Oxley, the regulation-heavy law it passed after Enron collapsed a few years ago. Sarbox, as it’s known, hasn’t worked. It didn’t protect our economy from the current crisis, for example. But it has helped drive entrepreneurs to invest overseas (where regulations are lighter) instead of here at home. Washington could encourage growth on the Street just by getting out of the way.

As a rule, Congress is good at two things: 1) doing nothing at all. 2) overreacting.

Some lawmakers appear eager to prove that rule, pushing for a massive overreaction. Better they should quickly pass a limited rescue package that stabilizes the market, then proceed to remove the regulatory meddling that helped create this mess in the first place. That’s the best way to prevent future turmoil and protect taxpayers.