A Race Everyone Wins 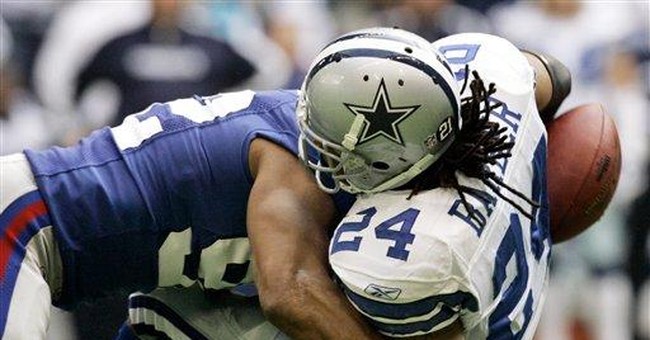 Every January, there’s new proof that competition forces everyone involved to get better. That’s when millions of Americans tune in to the NFL playoffs, where only the best teams advance.

Because the competition is relentless, each team works hard to get better. Last year, for example, the New England Patriots came up short, losing to the Indianapolis Colts. So this season the Pats brought in a superstar wide receiver -- and rolled to an undefeated regular season.

And no innovation in the NFL goes uncopied. If a coach designs an effective offensive or defensive play, you can bet the rest of the league will start using it faster than you can say “Tampa Two” defense.

Of course, the NFL isn’t the only demonstration that open competition drives improvement. January is also the month that The Heritage Foundation and The Wall Street Journal publish their annual “Index of Economic Freedom,” a country-by-country survey of the level of freedom enjoyed by people all over the world.

Following the inaugural publication of the Index in 1995, the global economy grew progressively freer every year for more than a decade.

This matters, because economic freedom is strongly related to good economic performance. Average per capita income in the world’s freest countries is twice that of the countries rated “moderately free,” and more than five times the average income of those rated “mostly unfree” or “repressed.”

That makes sense. Take “business freedom,” one of the 10 factors considered in grading every nation’s economy. The easier it is to start a business, the more likely people are to open one -- and the more likely they are to reap the financial rewards that grow an economy.

A higher level of economic freedom, though, does more than just boost a nation’s gross domestic product. Higher GDP growth rates create a virtuous cycle that leads to further improvements in economic freedom. It’s a global race to the top. And the data demonstrate that the more countries dismantle regulatory and other barriers to free enterprise, the faster their economies grow and the greater the prosperity enjoyed by their citizens.

Look no further than Hong Kong. For the 14th straight year it ranks number one in economic freedom. It boasts the top score in four of the Index’s 10 categories of economic freedom, making it the “poster economy” of the world.

But competition for the top spot is fierce. Another former British colony, Singapore, remains a close second. And they’re both being pursued by their regional colleague Australia, the fourth-freest economy.

On the other side of the globe Ireland holds the number-three spot. The Emerald Isle has championed financial freedom and property rights, and its commitment to free trade has made it a major commercial and financial hub.

Here in the United States the picture remains bright, but not as bright as it should be. Our economy is at number five in the world, but we’ve lost a bit of ground since the 2007 Index. This should be a warning to policymakers that it’s time to increase our commitment to economic freedom. Unless we reduce the size and scope of government (where the U.S. earned its lowest scores, by far) other countries likely will race past us in the years ahead.

In a global economy, as in the NFL, there’s no secret about how to succeed. Economic freedom makes a country wealthier and its people more comfortable. Our planet is engaged in an economic competition that can make everyone a winner. As more countries race to embrace more economic freedom, more people will enjoy longer, healthier and happier lives.

That’s an economic race we look forward to chronicling in upcoming editions of the Index.