Does Your Hatred of Trump Outweigh Your Love of America?

D.W. Wilber
|
Posted: Jul 30, 2020 12:01 AM
Share   Tweet
The opinions expressed by columnists are their own and do not necessarily represent the views of Townhall.com. 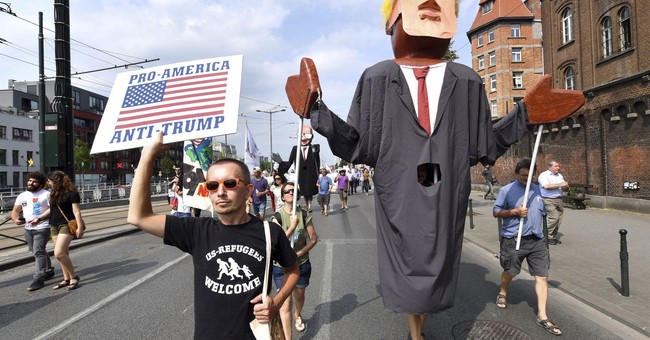 Since the moment that he rode down the escalator at Trump Towers in New York City Donald Trump has been ticking people off. He drives me crazy over something he does, says, or tweets nearly every single day. It seems that he often takes one step forward only to take two steps backward when it comes to how he is perceived in Washington.

The recent speech he gave at Mount Rushmore was a masterful piece of oratory, one of the best if not the very best speech he has given during his presidency. While his speech certainly upset the Commie-Democrats, it wasn’t because of what he said that angered them, it was because he looked very presidential and in command. That’s the last thing they want from Donald Trump. The stronger his presence and public persona the worse it is for Sleepy-Creepy Joe Biden’s chances of winning in November.

But almost immediately following the best speech of his entire time in office, President Trump gets into a twitter battle with NASCAR and a race car driver that no one has even heard of. Two steps backward.

Is he brash and often blunt? You bet he is. President Trump doesn’t suffer fools or idiots very well. Especially those fools and idiots who work in the legacy news media, and who have been determined to unfairly attack the president at every opportunity. They simply despise the man because he sees through their phony façade of supposedly being real ‘journalists,’ when in reality they are nothing but shills for the Commie-Democrats.

For all of the faults President Trump has, he also possesses some of the qualities that so many of us admire about him. He loves this country. He busts his rear end every day looking for new ways to try to make life better for ALL Americans, regardless of race, creed, or color. And he’s gotten stuff done.

With all of his successes that are covered up or ignored by the news media, so much more could have been achieved if President Trump had just a little cooperation from the Commie-Democrats. They simply will do nothing that might make the president look good. Even if it means the American people have to suffer.

The Commie-Democrats are bad enough, but what they do is totally expected of them. They know no other way to be than to be hyper-partisan and even downright un-American. What is really troubling to me though are the so-called Republican ‘Never-Trumpers’ who equally disdain this president.

Front and center among these Trump haters is George Conway, husband of President Trump’s senior advisor Kellyanne Conway. It’s always been curious to me why Kellyanne hasn’t kicked his chubby rear end out into the street by now for all of his constant undermining of her position within the Trump White House. But that’s between the two of them.

But I do have to ask those same so-called Republicans one question. Is your hatred for President Trump so much more intense than your love for this country? If it is, then perhaps you need to think about taking up residence somewhere else. We don’t need any more lukewarm Americans hanging around getting in the way.

It seems to me that knowing what is going on in our country right now, and how far left the Commie-Democrats have turned, how can someone who calls themselves a Republican even consider not supporting President Trump in November?

President Trump certainly doesn’t fit the mold of a John McCain or a Mitt Romney, but then again those two losers never resided in the White House. Trump does. Both of them lost to a closet commie with little in the way of skill or ability. And Trump was able to defeat the most dishonest, corrupt, and despicable politician in American history to ever run for the highest office in the land.

And he did it against all the odds, including having his predecessor spying on his campaign and doing everything he could to undermine his successor. Something that has never happened in the history of our nation’s transition to a new administration.

Yes, President Trump ticks me off on a regular basis. But how can one argue with success? He has done a remarkable job against an avalanche of unfair criticism from the news media, a bogus impeachment, attacks against his family, and disloyalty from so-called Republicans like the loser Mitt Romney and John McCain before he died.

I love my country as much as President Trump does, which is why I’m going to overlook some of the things he does that I don’t always like or agree with. And I would encourage all the Never-Trumpers out there to love your country more than you hate Trump. And to vote for him in November so that this great American experiment never disappears from history, like all the statues being torn down by the Commie-Democrats.