Unfit to be President?

D.W. Wilber
|
Posted: Aug 04, 2016 12:01 AM
Share   Tweet
The opinions expressed by columnists are their own and do not necessarily represent the views of Townhall.com. 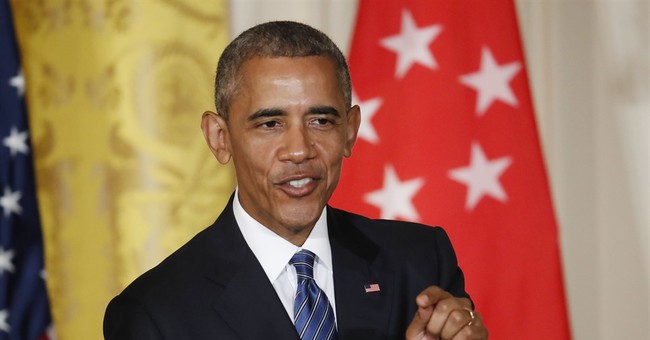 It’s interesting to have heard in recent days Barack Obama claim that the Republican nominee for president is “unfit” to serve as the nation’s chief executive. Harsh criticism coming from a former community organizer whose record in the Illinois state Senate consisted of mostly “present” votes on legislative issues, and who served in the United States Senate for less than two years before he announced his own candidacy for president.

While criticizing the Republican nominee, among other things, Obama has ridiculed Trump’s apparent lack of experience and understanding of the intricacies of diplomacy and foreign relations. But maybe we need to examine Obama’s record to see if the pot really should be calling the kettle black.

Obama took office amid a great deal of media hoopla. Youthful and with fair skills as an orator, as the nation’s first black president even those Americans who did not vote for him were hopeful that his election would usher in an era of peace after America’s long involvement in Iraq and Afghanistan. After all, he had promised to end both wars if elected, and by 2008 America had become a war-weary nation.

It was also encouraging that he had claimed that he was going to be the president of all Americans, not just black Americans. What a disappointment his efforts at bridging America’s racial divide have been. Prior to Obama taking office Americans had made great strides in achieving a color-blind society. Over the seven plus years since Obama came into office he has set race relations back decades.

But Obama’s record on the international scene, of which he has been so critical of the Republican nominee, has been even more dismal than his record on race relations. Not to mention his pathetic economic record which finds more Americans receiving food stamps and other types of public assistance than ever before.

Shortly after taking office Barack Obama embarked upon his famous, or infamous as many would describe it, ‘Apology Tour’. Visiting Cairo, Egypt and speaking to Egyptian college students it seemed that his sole purpose for being there was to apologize for America’s very existence. Forget about all the people over the years that America had freed from communist and other oppressive governments.

Obama naively believed that was all that he had to do, and by virtue of his sterling personality our enemies in the world would succumb to his charm. Once world peace was achieved and he had notched up a Nobel Peace Prize, he could put foreign policy on the back burner and forge ahead with his domestic agenda to “fundamentally transform” the United States of America.

We see today the results of Obama’s failed foreign policy, led by then Secretary of State Hillary Clinton, whom Obama now describes as absolutely “the most qualified person ever to run for president of the United States.”

But the reality is that what we see is a large part of the world in chaos as a result of the absence of American engagement and leadership. Libya has become a home base for every Islamic terrorist organization, including the ‘master stroke of diplomacy’ by the Obama-Clinton foreign policy, the creation of the Islamic State. Better known as ISIS, which is spreading its barbarism to Europe and threatening to bring it home to the United States.

The Obama administration supported the Muslim Brotherhood in the ouster of Egyptian President Hosni Mubarak and their takeover of what had been our strong and reliable Middle Eastern ally. Eventually the Egyptian military had to step in and fix the Obama-Clinton mega foul-up. But instead of supporting the new Egyptian leadership in their efforts against radical Islam, our relations have remain strained.

Obama’s “red line” in Syria was ignored, and a humiliated United States of America had to beg for Russia’s Vladimir Putin to intercede before the Syrian civil war completely spilled out of its borders and spread all over the entire Middle East, including into staunch American allies like Jordan, and into what had at one time been a strong ally, Turkey, which is now on the verge of becoming another Islamic Republic in the mold of our arch enemy Iran.

The Islamic Republic of Iran now races toward nuclear weapons, flush with billions of dollars courtesy of the United States via the ill-advised and one-sided agreement “negotiated” between the United States and the world’s foremost supporter and exporter of terrorism. Obama-Clinton-Kerry diplomacy at its best.

Russia has annexed the Crimea and continues to threaten Ukraine, while also rattling its sabers towards nations of the former Soviet Bloc, which are now American allies and members of NATO. It’s obvious that Russia’s leadership and Russian society view Obama with complete and utter disdain, considering the insulting cartoons of Obama and Hillary Clinton that festoon the editorial pages of Russian newspapers.

So contrary to the recent assertions made by Obama on the qualifications of Donald Trump to be president, it would seem a pretty fair statement to say that based on his failed policies, Obama himself is the one who was and is “unfit” to hold the office.

Obama was unqualified and unfit when he assumed the presidency. And he will be considered even more so when he leaves office. History will not be kind.