D.W. Wilber
|
Posted: Apr 26, 2016 12:01 AM
Share   Tweet
The opinions expressed by columnists are their own and do not necessarily represent the views of Townhall.com. 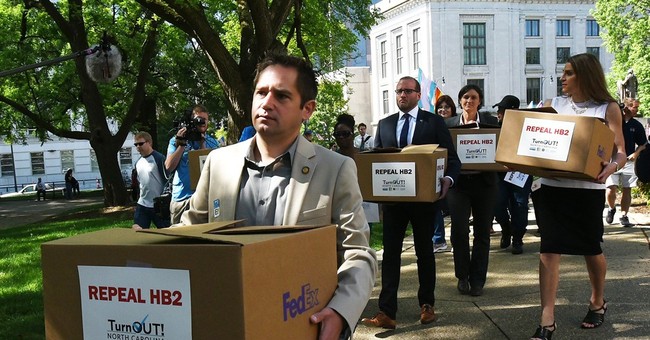 For decades now, and particularly over the past seven plus years when the assault against morality in America has kicked into high gear, traditional American values have been under an unremitting attack by the extremist liberals and their allies in the Socialist Party of America - I no longer refer to it as the Democrat Party since it does not come close to resembling the Democratic Party of our grandparents.  What was once the traditional Democratic Party in this country was long ago taken over by the extreme left wing of American politics.

Much more reflective of the political system in the former DDR, Deutsche Demokratische Republik, The Socialist Party in America continues to morph more and more each day into the oppressive political institution not far removed from that former much hated regime in communist East Germany.

For example, in the East Germany of old the despised secret police Stasi kept tabs on every East German citizen, infiltrating with informants all institutions and even individual families.  If one didn’t toe the party line on every issue they could quickly find themselves rounded up in the middle of the night and carted off to prison.

In this country we have recently seen the Obama Administration’s Justice Department headed up by Attorney General Loretta Lynch threaten to prosecute ‘climate change deniers!’

In other words, if one chooses to believe the opinions offered by other reputable climatologists and scientists who contradict the politically correct position of blaming climate change on human fossil fuel consumption, one may soon find themselves occupying an eight by six foot cell in a federal prison.  Mind you a prison certain to incorporate ‘green technology’ into their prison infrastructure.

During the 2008 presidential campaign local prosecutors from the Socialist Party in the St. Louis area made some less than veiled threats to prosecute individuals for “making false statements about the Socialist candidate for president.”  In other words, infringing upon an American citizen’s freedom of speech simply because the two prosecutors didn’t like what might be said about their own favored candidate, Barack Hussein Obama.

Sounds eerily reminiscent of East Germany under the communist regime of General Secretary Erich Honecker.  The only thing missing are the jack-booted thugs kicking in doors in the middle of the night and carting people off to the Gulag to be forever forgotten.  Or perhaps placed in ‘reeducation camps’ as the communists did following America’s departure from South Vietnam.  All simply for disagreeing with the Socialist Party’s positions and being publicly vocal about it.

Currently we find ourselves embroiled in a controversy over where some individuals should be allowed to go to the bathroom.  People who were considered mentally disturbed at one point in time before America became the world’s leader in political correctness and tolerance.  Tolerance for leftist liberal causes only.

Individual states that view this as a privacy and public safety issue are being admonished by the president, and threatened with having federal funds cut off simply for passing legislation intended to protect the rights and privacy of the overwhelming vast majority of Americans.

It seems choosing for the “common good” as mentioned in the United States Constitution comes in second to the desires of a very, very small - miniscule - to be accurate, percentage of America’s over 300 million people.

We are also witnessing a presidential campaign where the socialist candidate Hillary Clinton continues her overwhelming lead for the party’s nomination, over another self-avowed socialist who once honeymooned in Castro’s Cuba, and never held a real job until he was 40 years old.  Apparently living off of others his entire life up until that point.  Which pretty much falls directly in line with his own political philosophy, “what’s yours is mine.”

The former president of the Socialist Party, Bill Clinton, was impeached for his lies and sexual predatory behavior yet he is roundly applauded at party events when he gives a speech.  He is treated like a rock star instead of a pariah - which is all one needs to know about the character of the Socialist Party in America.  Indeed, America has become an immoral place, at least when attending Socialist Party functions.

The party’s eventual nominee Hillary Clinton could stand on an American flag on the steps of the United States Capitol while quoting Marx and Lenin, and ripping up the Constitution of the United States and the Bill of Rights, and her rabid socialist supporters would still vote for her.  You see, to a member of the Socialist Party it is all about power and winning.  Integrity, honesty, and character play no part in whom they select as their candidates.

If one supports the extreme liberal social issues the party advocates for that is all that matters.  Homosexual marriage, abortion on demand right up until the day of birth, and freedom of choice in toilet behavior are the most important issues socialists believe in.  I’m not really sure if public safety and national security even make the list of priorities for socialists.

Decades of socialist efforts to control our education system while indoctrinating millions of young impressionable minds into the socialist ideology has been largely successful, as evidenced by campuses with ‘safe spaces’ and students becoming catatonic over political slogans they don’t like.  The news media, indoctrinated by those same universities’ journalism schools has long been in the pocket of socialist politicians.  And our political process is being corrupted by allowing convicted felons and illegal aliens all to vote in elections, which speaks volumes about the agenda of the socialists.  Win at all costs.

Those who stand up for traditional values and morality are roundly criticized and shouted down by the liberal elites, and called bigots and haters simply for holding and expressing different beliefs from the socialists.

Once respected around the world as a beacon of freedom, America has become a laughing stock - ridiculed by our friends and enemies alike.  In their minds, as in the minds of many Americans, America is seemingly worried more about toilet etiquette than in leadership.  Good Lord help us.

Dana Loesch Gets Ahead of the Liberal Media's Predicable Move to Protect Alec Baldwin Post-Accidental Shooting
Townhall
Nikki Fried would just like to remind her future constituents that Florida is thriving 'despite @GovRonDeSantis, not because of him'
Twitchy
Joe Manchin Hits the Brakes on Joe Biden's 'Build Back Better' Victory Lap
Redstate
Radio Silence: Where's Dan Bongino?
PJ Media