D.W. Wilber
|
Posted: Mar 01, 2016 12:01 AM
Share   Tweet
The opinions expressed by columnists are their own and do not necessarily represent the views of Townhall.com. 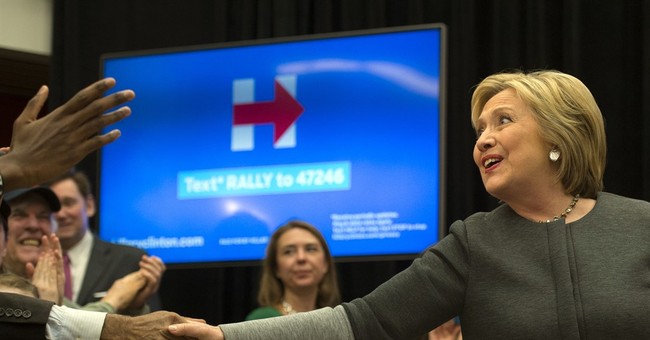 Once again the State Department releases a batch of former Secretary of State Hillary Clinton’s e-mails, and once again a significant number of those e-mails contained classified information. Compromising that information and likely allowing our adversaries to read them as quickly as Clinton’s addressees.

Until an indictment finally comes down from the Obama Justice Department headed up by Attorney General Loretta Lynch, which formally charges the former Secretary of State with a variety of crimes, one way or another I will be starting off each and every day voicing the demand for Hillary Clinton to be indicted.

Based just on the information that has so far leaked out about the FBI’s investigation into Hillary Clinton’s use of a private e-mail server to transmit and receive highly classified information, there is far more evidence than would normally be needed to indict of any other government employee or member of the military.

The fact that Hillary Clinton continues to be allowed to run for the office of President of the United States is clearly an example of un-equal justice under the law. It is time for Americans to demand that the Justice Department hold Hillary Clinton accountable for placing America’s national security at risk. She should be indicted, forced to at the very least suspend her campaign for president, and defend herself within the criminal justice system against the serious charges that have been made against her.

It is time for Americans to demand that Hillary Clinton be treated as anyone else who through the course of their work has access to highly classified and sensitive information, and fails to abide by laws and regulations that govern how information is to be protected.

Through neglect, but also through criminal conduct Hillary Clinton mishandled the types of classified information that places America’s national security at risk. And then took steps to try to cover up and destroy potential evidence that could be used against her, thereby obstructing justice.

Right now it sure looks like Hillary Clinton and her top aides could be facing prosecution for multiple criminal charges relating to the obstruction of justice, conspiracy to obstruct justice, tampering with evidence, espionage, and exposing America’s national security secrets to our enemies.

Yet Hillary Clinton’s campaign for the highest office in the land continues to plug along clearly hoping that this problem, as have many other legal problems in the past for the Clintons, just goes away like all the others. But the sheer number of times Hillary has changed her story ought to be enough to give pause to anyone who is contemplating voting for her. Will she do the same once in office? Will she change her story to suit her current needs?

Is party affiliation all-important to the Democrats? Is gender all that matters to some Democrat voters? Does character even have a place in politics anymore for Democrats?

And are American politicians so jaded that the quote from the NFL Hall of Fame football coach Vince Lombardi, “Winning isn’t everything, it’s the only thing” is what our political culture has become. But what of America? Doesn’t America matter anymore?

With Hillary’s serious legal challenges coming to a head the case is also being made that the Republicans need to nominate a good candidate who can and will win the White House. If a Democrat wins this year’s presidential contest does anyone truly believe that Hillary Clinton will ever be held accountable for her crimes? Hardly. Democrats make excuses for bad behavior, they never hold one another accountable.

If a Democrat is elected as president, Hillary Clinton could stand in the front yard of the White House, stomping on the Stars and Stripes while quoting Marx and Lenin, and ripping up a copy of the Constitution of the United States, and the Democrats would rally around her. They are more concerned with party loyalty than they have ever been about what’s best for America.

So today, as I will do again tomorrow and every day hereafter, I am demanding that the Department of Justice do the right thing and indict Hillary Clinton quickly. Her history of lies, deceit and dishonesty have shown that she is wholly unfit to serve in any elective office, much less as Commander in Chief of America’s military.