You Don’t Give Up The Ship

D.W. Wilber
|
Posted: Jan 14, 2016 12:01 AM
Share   Tweet
The opinions expressed by columnists are their own and do not necessarily represent the views of Townhall.com. 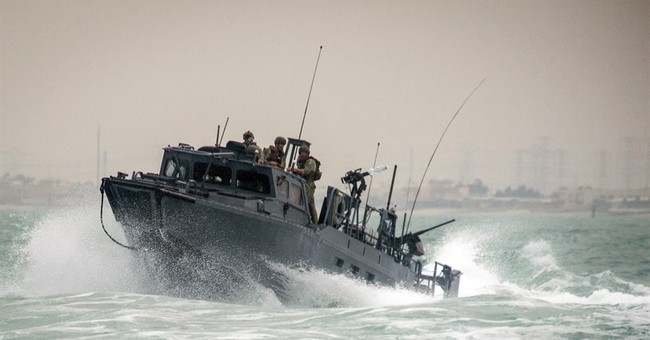 Thankfully the ten American sailors who were captured by Iranian Revolutionary Guard patrol boats apparently without firing a shot have been released.  For many of us it brings to mind an incident involving American Naval forces back in 1968.  The attack by North Korean patrol boats on the U.S.S. Pueblo, an American intelligence-gathering vessel operating in international waters, then under the command of Lieutenant Commander Lloyd M. Bucher.

Back then, as has happened this time in the Arabian Gulf ships of the United States Navy were surrendered and U.S. sailors were taken into custody by hostile naval forces.  In the case of the unarmed U.S.S. Pueblo, which is still in the hands of the North Koreans by the way, the ship came under intense attack and enemy fire, sustaining casualties before the captain of the Pueblo eventually surrendered to the North Koreans.

While the full story of what happened in the Arabian Gulf – calling it the Persian Gulf gives too much credit to the Islamic Republic of Iran, I’ll use the other name it goes by – it appears that no shots were fired by either side, though the results were the same.  American Naval ships surrendered to hostile enemy forces, and American sailors and the United States were humiliated on the international stage.

Of course there is one big difference between the Pueblo incident and this most recent involving the Iranians.  With the U.S.S. Pueblo the administration of President Lyndon Johnson accused North Korea of committing an act of war and repeatedly demanded that the North Koreans release our sailors, eventually negotiating for their release from their brutal ordeal eleven months later.

Since the release of our sailors by the Iranians, the American Secretary of State John Kerry has thanked Iran for its ‘humane treatment’ of the American Naval personnel it held against their will.  This as humiliating photographs began to flood international news outlets showing American sailors on their knees, hands clasped above their heads, surrendering to Iranian Republican Guard forces.  The only thing missing were the blindfolds which covered the eyes of our diplomats in Tehran back in 1979.

The other thing that appears to have been missing, which the crew of the U.S.S. Pueblo bravely did back during their captivity, was to resist their captors as much as possible.  Including the time the North Korean’s demanded the Americans pose for propaganda photographs.  The crew members fought back by making a very recognizable and distinct gesture with the middle finger of their hands, telling the North Koreans it was the “Hawaiian good luck sign”.

Also included in the photos was one of a female American sailor apparently submitting to wearing a scarf over her head, likely at the insistence of her Iranian captors.  That alone evokes questions about the validity and wisdom of this administration’s insistence at opening up all combat positions to women.

This entire incident also calls into question just what are the standing orders for American vessels operating in the Arabian Gulf ?  Are they allowed to take defensive action, including firing on hostile ships if faced with aggressive actions by an enemy ?  Or are they instructed to simply surrender and allow themselves to be boarded ?  Were the orders given by more senior area commanders to these vessels to surrender and allow themselves to be boarded ?  My question would then be how high up and who gave those orders ?

American ships are capable of towing other disabled vessels and have done it repeatedly over the years.  Unless for some strange reason both of these patrol vessels became disabled at the same time, it certainly seems that one would be able to tow the other out of harm’s way, particularly if they knew they were drifting towards Iranian waters.

And subsequently preventing the Iranians from boarding and inspecting our ships, and resulting in the humiliating videos and photos being broadcast around the world.  That alone begs for an explanation.  While many questions remain and hopefully will be answered in the coming days.

With reports emanating from Iranian television showing the supposed commander of the American vessels apologizing to Iran and complimenting the Iranians on their treatment, the U.S. military’s Code of Conduct aside, something certainly seems very curious about the U.S. response to this entire incident.

Although unseen in the photos, Iranians certainly were holding weapons on our sailors and forcing them to their knees with their hands clasped behind their heads when the boats were boarded.  Which in my book doesn’t appear to be something one should be grateful to the Iranians for.

But considering the record for “transparency” of the Obama Administration it’ll probably be a cold day somewhere very hot before we find out the truth about this American capitulation on the high seas.