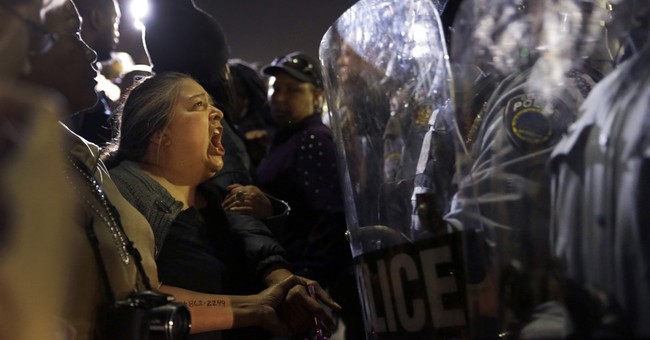 Reading Heather Mac Donald’s recent column ‘The New Nationwide Crime Wave’ should be an enlightening experience for anyone who is troubled by the direction our country has been taken by the Obama Administration over the past six plus years.

Crime and violence in American cities has increased since the shooting of teenaged thug Michael Brown by police in Ferguson, Missouri in 2014. Followed by the violence in Baltimore, the murders of police officers in New York and elsewhere, America’s police officers have come under siege across the nation.

The surge in crime in over 30 American cities, after 20 years when as a nation we experienced falling crime rates across the country, is clearly a result of a criminal element that has been emboldened by the actions taken by the Obama Administration’s open support of the thug element, and the administration’s vocal criticism of the police.

Early on during his first term President Obama insinuated himself into the Henry Lewis Gates situation, accusing the Cambridge Police of “acting stupidly” when they arrested Gates, the black Harvard professor. And Obama did so without having any of the facts of the case to base his comments on.

His community-organizer-anti-police bias was clearly present during this early incident, and then even more pronounced later on when he claimed symbolic fatherhood of Trayvon Martin, though in the case of Martin’s death the police were not involved.

Under his Eric Holder-led Justice Department, which became more of a ‘Social-Justice Department,’ people of color were given a pass on bias crimes while the same standards were not afforded to others. Obama’s bias against the police was easily and enthusiastically matched by Attorney General Holder.

Almost before the crime scene tape was taken down in Ferguson the president was critical of the Ferguson police, and felt compelled to send White House representatives to Michael Brown’s funeral, even though a video tape was presented that showed Brown was nothing but a thug who had just committed a strong armed robbery just prior to his death.

It’s the first time I can ever remember a presidential administration lionizing a criminal who had just committed a felony robbery, and who viciously attacked a police officer which resulted in his own death at the hands of that officer.

Following the death of Baltimore’s Freddie Gray, a street corner drug dealer with a lengthy rap sheet, the president once again sent White House representatives to his funeral, while Baltimore burned and the corrupt mayor and prosecutor railroaded six Baltimore police officers.

With crime spiking in American cities and the police forced into a defensive mode, almost afraid to insert themselves into potentially volatile situations out of concern that they’ll be second and third-guessed by the media and the Obama Justice Department, the victims of this crime surge are the very same minorities that Obama, Holder, and now Loretta Lynch claim to be looking out for.

But what’s behind this apparent Obama effort in demonizing the police? Go to Saul Alinksy’s “Rules for Radicals,” Rule Number Twelve for an understanding of what is taking place. In brief, “Pick the target, freeze it, personalize it, and polarize it.”

The Obama radicals have set out to demonize the one institution that serves as a glue to help hold this country together. Without the rule of law as enforced by American police officers, the only rule left will be the one established by the radicals. Such as those who permeate the Obama Administration’s most senior levels. And the mantra for those leftist followers of Alinsky is summed up simply in the quote “the ends justify the means.”

Once the police are turned into more of a sanitation department, arriving on a scene only after the violence has already happened and left only to help sweep up the mess left behind, our inner cities in America will dissolve into chaos.

The weak and innocent will be preyed upon by the true believers in Obama’s form of socialism, ‘Obamunism’ if you will. Using ‘predators’ they will work towards completing what they have set out to do. Turning American cities into socialist enclaves controlled completely by the radicals.

And once they discover that they cannot sustain themselves the chaos will eventually need to venture out into the countryside for survival. Spreading the chaos and violence throughout America.

Not a promising future for America. Or is all of this simply part of Barack Obama’s pursuit of social justice and his “fundamental transformation” of the United States of America and nothing more?

Or part of a violent revolution and overthrow of the United States of America at the hands of the true believers?